Australia’s largest ever philanthropic donation is bearing fruit, with the first five recipients of the Forrest Foundation research scholarships announced at the University of Western Australia today. 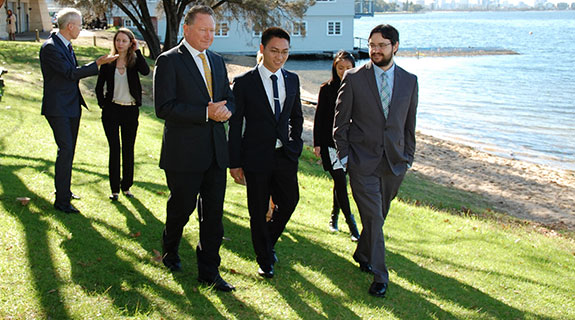 Australia’s largest ever philanthropic donation is bearing fruit, with the first five recipients of the Forrest Foundation research scholarships announced at the University of Western Australia today.

It comes around 18 months after the initial $50 million research fund was announced as part of a $65 million donation to promote research at Western Australia’s five universities.

The students, who come from across the globe, will be undertaking doctoral studies in a variety of fields

Ms Goh is currently an international student at UWA.

Fortescue Metals Group chairman Andrew Forrest, who funded the foundation with his wife, Nicola, said UWA was a world-class university and an institution close to his heart.

“The Forrest Scholarship winners represent the beginning of a long-term commitment to making Australia a beacon for the great young minds of the world,” he said.

Mrs Forrest said bringing the best young minds to Australia would ensure that the country remained at the cutting edge of the research world.

"Building a culture that fosters learning and research at the highest level will ensure that Australia remains a strong and vibrant community for generations to come," she said.

UWA vice-chancellor Paul Johnson said the university was delighted to welcome the skills, talent, energy and intellect of the first scholarship winners to WA.

“As a result of the Forrests’ generosity, we are better able to attract some of the very brightest people from around the world to create a powerhouse of ideas here in Perth, and to advance the development of our state, our society and our culture,” he said.

The Forrests, who were awarded honorary doctorates from UWA last year, were reportedly the first wealthy Australians to sign the international Giving Pledge, a movement started by Warren Buffett and Bill and Melinda Gates.