Local players in the corporate finance market faced more competition than ever before from big national and international firms, WA Business News’ 2011 survey has found. 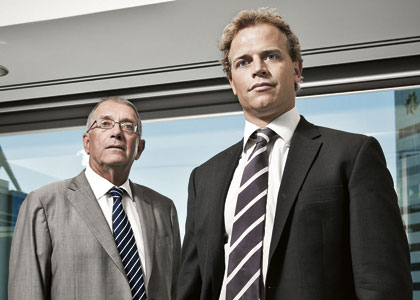 Local players in the corporate finance market faced more competition than ever before from big national and international firms, WA Business News’ 2011 survey has found.

The stock market may be weak, and completing capital raisings is hard work, especially for companies looking to float, but the corporate finance sector was still a busy space in 2011.

WA Business News’ latest annual survey, larger than any done before, listed more than 340 capital raisings and 180 mergers and acquisitions (M&A) deals for the past calendar year.

Collectively, these deals were worth a whopping $59.8 billion and there was an army of corporate advisers, lawyers, accountants, PR advisers and others chasing a share of that money.

In this edition and next week, WA Business News will analyse the sector and identify the market leaders.

Subscribers can analyse our comprehensive database of deals for themselves, by going to our website and following the ‘corporate finance’ link.

This edition focuses on the corporate advisers. While there is some variation across the equity capital markets (ECM) and M&A segments, there is a group of three firms that, in overall terms, lead the pack – UBS, Macquarie Capital and Hartleys.

They sit ahead of competitors such as broking firms Patersons and Euroz and advisory groups such as Azure Capital, Ernst & Young and Gresham Advisory (see attached table: 'The Major Corporate Advisers' for summary data).

Gresham managing director Justin Mannolini says the most notable development in the market last year was the influx of eastern seaboard and international banks, chasing deals in the Perth market, which was “not surprising given the relative dearth of activity elsewhere”.

“This has resulted in the Perth market being heavily overbanked,” Mr Mannolini said.

“However, the continued prominence of advisers with a permanent Perth presence demonstrates the importance of ‘on-the-ground’ knowledge.”

Euroz executive director Doug Young said the competition from large international securities houses and overseas brokers trying to establish a presence in Western Australia could lead to a shakeout.

“Bought deals and naked underwriting is being used more often as a competitive tool, with brokers more interested in selling down their exposure post the deal than the value proposition put to clients,” he said.

“We expect poor performance in the aftermarket and subsequent shareholder reaction will see companies return to marketed deals where investors buy into the value proposition, hold and increase their positions on the back of high-quality research and broking.”

Looking at overall market trends, the M&A segment was relatively buoyant (see Macquarie makes running with $10.8bn), while ECM was a tougher sector.

In fact, the number of WA-related ECM deals completed, and the amount of capital raised, by nearly every major broking firm and investment bank was down from the previous year.

The firm’s profile in Perth was also helped by the earlier posting of Richard Saywell in the west, before his return to Sydney.

UBS had a lead role on nine ECM transactions during 2011, up from four the previous year.

Its clients raised a total of $1.4 billion in those transactions. After adjusting for the contribution of joint lead managers (by splitting the proceeds equally), the amount attributed to UBS was $932 million, which was still enough to make it number one in the WA market.

This transaction had a strong Sydney flavour but has been included given the WA domicile of many of the assets and directors of Seven West Media, formerly West Australian Newspaper Holdings.

On the gross numbers, global banking group JP Morgan ranked number two for WA capital raisings, even though it worked on only a handful of transactions.

But after adjusting for joint lead managers, the amount attributed to JP Morgan, which services WA from the east coast, was cut in half to $492 million.

Perth-based broking firms Euroz and Patersons have traditionally been the market leaders in WA and they continued to be very strong players last year.

Their sweet spot is WA-focused resources stocks, though both firms have won work from clients outside that niche.

Euroz had a lead role on 20 capital raisings last year, with gross proceeds of nearly $800 million – both figures were similar to the previous year.

After adjusting for joint lead managers, the amount attributed to Euroz was $544 million.

Executive director Doug Young said the highlight for the year was completing large raisings for mostly WA clients in a “difficult and extremely volatile market”.

“Continued research-led dominance of the unconventional energy sector with successful capital raisings for the likes of Aurora Oil & Gas, New Standard Energy, Red Fork and Entek is something we are proud of,” Mr Young said.

He said Euroz’s research offering continued to be highly valued by Sydney and Melbourne-based institutional investors, as borne out by its leading national market share in the trading volumes of client companies and the successful capital raisings.

Patersons raised a similar amount for its clients, but its transaction profile continued to be very different, with a large number of small capital raisings.

In fact, Patersons worked on 101 transactions last year, down from 161 the previous year, with gross proceeds of $791 million and attributable proceeds of $623 million.

Notably, its larger transactions were mostly for companies that had suffered financial pressure and were looking to raise money to restructure their business.

All of these transactions were completed, illustrating the ability of WA companies (even those experiencing financial stress) to raise capital in tough market conditions, if they get their pricing right and obtain sufficient support from their brokers.

Coming in behind Euroz and Patersons was a trio of Perth-based brokers and advisers, namely Hartleys, Azure Capital and Argonaut.

Hartleys had a lead role in 21 transactions, with gross proceeds of $477 million and attributable proceeds of $361 million.

Its major transaction was advising South Africa-focused Gold One International on a $150 million capital injection through a Chinese consortium.

Sydney-based Macquarie Capital continued to be a significant player in the WA market, though the number of capital raisings managed out of its Perth office fell to eight last year.

It also raised capital for TFS Corporation, Beadell Resources and Hot Chili, among others.

Helmsec is a relatively new player, with an Asian focus supported by offices in Sydney, Melbourne, Hong Kong and Singapore.

In contrast to UBS, most of the global investment banks continue to service WA from the east coast.

This is not necessarily through lack of interest; the challenge is finding appropriate people to establish their Perth presence.

This means investment banks like Goldman Sachs, Morgan Stanley and Credit Suisse are usually limited to a handful of mid-sized transactions each year, with the occasional large deal.

One of the major trends of the past decade has been the growing prominence of the Toronto Stock Exchange as a source of capital for mining companies.

Many WA companies, especially those with projects in Africa and Latin America, have tapped into this trend, getting their start on the Australian Securities Exchange and listing on the TSX as their need for capital expands.

A recent example was Perseus Mining, which raised $C93 million ($89 million) in November through a share offering carried out by a syndicate of underwriters co-led by Clarus, Dundee and CIBC World markets.

Of all the Toronto firms that do business in WA, only one has taken the plunge and established a full corporate finance operation in Perth.

The Australian unit completed its first big transaction in November, when it advised Decmil on the acquisition of a 50 per cent interest in an accommodation village in Queensland and was appointed sole lead manager and underwriter of an $85 million entitlement offer.

Decmil Group CEO Scott Criddle said he had a long-standing advisory relationship with Karl Paganin, Steve Harding and the team at GMP “so we had great confidence that through their depth of experience GMP were the right team to advise us on the negotiations of the village acquisition and lead the associated capital raising”.

Another international firm with a rapidly growing profile in Perth is New York-based investment bank Casimir Capital, which had a lead role in three transactions toward the end of last year, and has just completed a fourth early this year.