Sadly, local communities across Perth and WA are increasingly losing trust in our planning system – not to mention our politicians.

Speaking to a Property Council lunch in late August, Premier Mark McGowan has labelled local communities that fight overdevelopment as “critics and naysayers”. Mr McGowan added that his government was "ambitious when it comes to development, housing or planning".[1]

This is a man without a sustainable economic plan. It’s time for WA to invest in secure jobs via a more diverse economy – not a continuation of the boom-bust ‘houses and holes’ model. WA must reduce its reliance on the housing construction industry to ‘grow’ our economy. Any industry that needs ever-more people to sustain it is a false economy.

To aid this false economy, state politicians from both major parties have tampered with the planning system. In the past, local councils with publicly elected members used to hold extensive powers over development approvals. While this system was not perfect and needed reform, at least local councillors were directly accountable to the community. Their voting on development applications before council could be easily reviewed by the local community.

In recent years, the state government has stripped most of the decision-making power from local councils and put it in the hands of unelected bureaucrats. These bureaucrats form so-called ‘independent’ development assessment panels or similarly named state bodies.

But many of these panel appointees are employed in the planning and construction industry, so have a vested interest in the system turning out a healthy level of development approval. It also raises questions about accountability of governments who take decision making further away from citizens in a democracy.

The recent fast-tracked passing of the Planning and Development Amendment Bill has further stripped local councils and our communities of the power to decide on overdevelopment under the cover of dealing with the COVID-19 crisis. The new powers would allow the unelected Western Australian Planning Commission (WAPC) to approve developments such as the hotel planned on a pristine beachfront near Margaret River without due consideration of local community concerns.

WA is experiencing a plethora of planning issues with the community greatly concerned about overdevelopment and the increasing environmental, heritage and infrastructure impacts of planning decisions. Community concerns are seeing uprisings and protests against Perth Hills sprawl, Scarborough high-rise, the Ocean Reef Boat Harbour, a hotel in Gnarabup near Margaret River, the demolition of Princess Margaret Hospital, Elizabeth Quay’s 58-storey residential tower, irrigating the Martuwarra Fitzroy River, and so on.

Around Australia’s states, property developers have had an undue influence on the planning process due to payments they make to political candidates and political parties. For too long, the powerful property industry has had the ear of state governments and lobbied their way through the halls of power.

There is a way to achieve a better, transparent, egalitarian and ecologically sustainable town and urban planning system that will stop overdevelopment and regain the trust of the community.

The first step must be to respect and re-empower local communities. 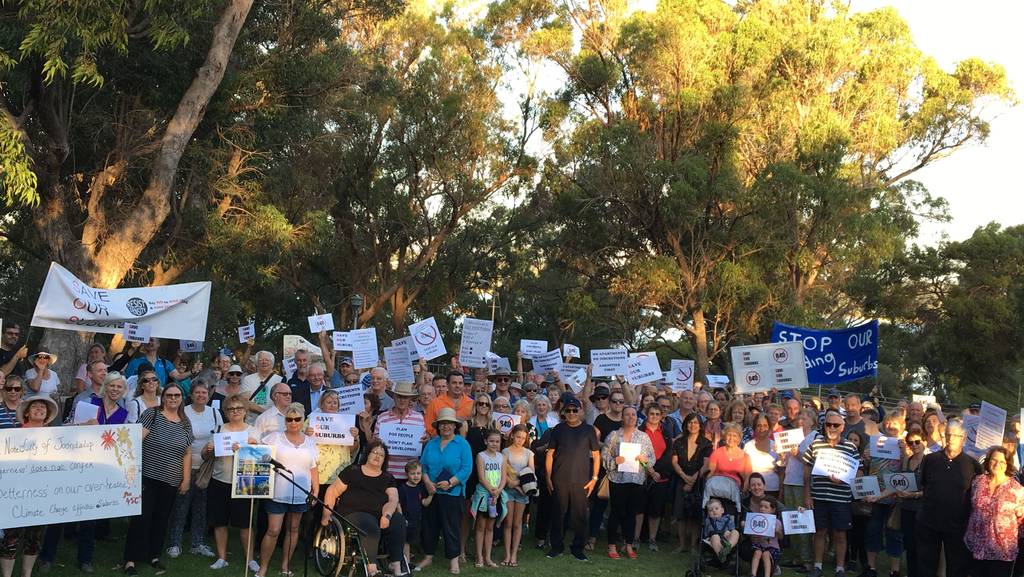 We must return real planning power to local communities through proper community engagement. This should include empowering local citizen juries (or panels) by local council area to determine a local plan stating the level of overall development - including total dwelling number, density and height limits - on a (say) 10-year basis.

A citizen jury could also be called in to determine projects proposed outside of the scope of the local plan, including so-called State-significant projects, to ensure any trade-offs are reflective of community desires.

Like court juries, citizen juries in planning hearings would be provided with expert opinions on the capacity of current community infrastructure so that where needed, new community infrastructure was delivered before more housing is approved (including the delivery of new schools, hospitals, public transport, roads, recreational and sporting facilities, green space, etc) – not the other way around.

Politicians would need a very good reason to overturn citizen juries and should only be allowed to do so in exceptional circumstances.

In conclusion, the course of land-use planning in WA over the past decade has been towards a system that increasingly favours developers and disenfranchises local communities and local government. This not only leads to poor planning outcomes it also represents a threat to due process, separation of powers and democracy. Planning institutions and laws should provide a safeguard to limit the likelihood of corrupt dealing between government and the development lobby.

We must stand up for such laws and institutions now and restore democracy to the WA planning system, or risk losing our environment, heritage and quality of life.