Tourism operators at Barrack Square have launched a walking tour with a difference – you don’t actually have to walk. 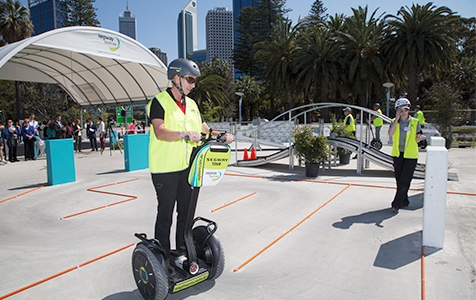 The first tour participants are put through their paces at the Segway Tours WA Experience Zone.

Tourism operators at Barrack Square have launched a walking tour with a difference – you don’t actually have to walk.

Segway tours have gained popularity in many tourist destinations around the world, but this is the first time the vehicles have been made available for use in Western Australia.

Segway Tours WA was established by brother and sister team Owen Williams and Belinda Hill, who have been planning the business since Mr Williams encountered the vehicles while on a trip to the USA some six years ago.

Mr Williams said the biggest hurdle faced was getting approval from the Department of Transport for the vehicles to be used in WA.

The state government passed legislation in April allowing the limited use of Segways in WA on shared paths under the supervision of approved tour guides.

Mr Williams said the passing of the legislation was the end of a long journey.

“The Segway fits into a grey area which we had to define, so now that the legislation is through it is classed as an electronic personal transporter, which is a separate definition for a vehicle.”

The tours will be run daily, with up to six tours departing each day.

Tours at Rottnest Island will start in November, while an ‘Experience Zone’ has been established in the city for riders to test the vehicles and master their use before heading out on a tour.

The training course, located at Barrack Square, includes an obstacle course, bridges, a seesaw as well as humps and bumps.

Mr Williams said the company was currently examining other options around the city and would make announcements regarding new tour locations pending successful negotiations with respective town councils.