WA exports step on the gas

Exports from Western Australia increased by 17.7 per cent to a record $144.8 billion in 2018, underpinning a strong improvement in the nation’s overall trade performance. 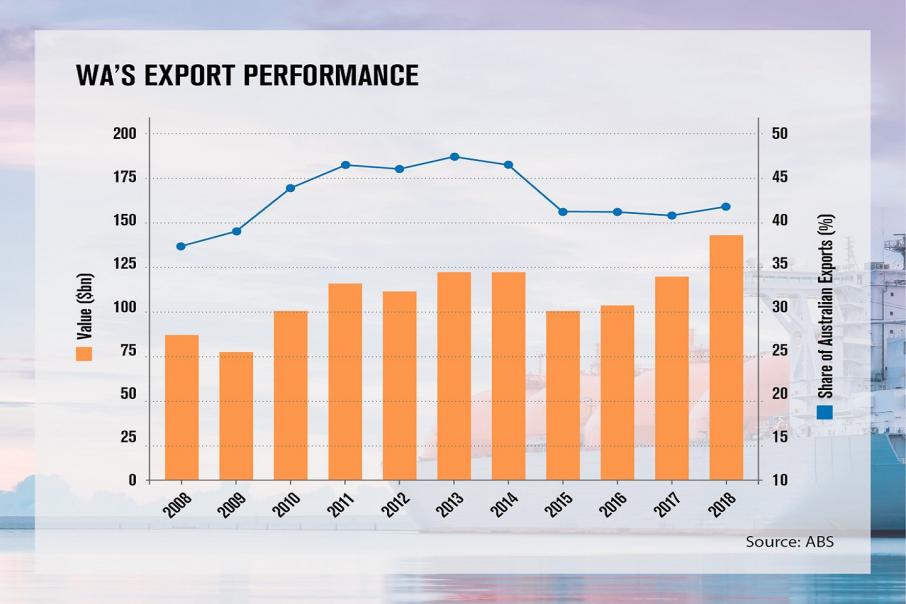 Exports from Western Australia increased by 17.7 per cent to a record $144.8 billion in 2018, underpinning a strong improvement in the nation’s overall trade performance.

New data from the Australian Bureau of Statistics shows the key driver for WA was a surge in sales of liquefied natural gas (LNG), whereas iron ore exports were down slightly.

The growth in WA trade meant the state accounted for 42.1 per cent of Australia’s merchandise exports.

That percentage was much higher in 2013, when WA accounted for 47.5 per cent of national exports.

Nationally, the biggest mover in 2018 was gas exports, which jumped 70 per cent to $44.3 billion to become the country’s third largest export.

This was helped by the start-up of Chevron’s Gorgon and Wheatstone LNG projects off the WA coast. Several LNG projects in Queensland have also been ramping-up production.

Coal, which is exported primarily from Queensland, regained its place as Australia’s single largest export commodity.

Coal exports increased by 16 per cent to $66.7 billion, reflecting both higher prices and export volumes.

Coal Council chief executive Greg Evans said the commodity’s export performance was a resounding rebuttal of coal detractors who have repeatedly called the end of the industry due to falling demand.

Mr Evans said Asian demand for high-quality Australian coal was expected to remain strong, with industry analyst Commodity Insights recently forecasting the requirement for up to an additional 500 million tonnes of coal per annum by 2030.

Collectively, the resources sector accounted for $248 billion worth of merchandise exports.

Minerals Council chief executive Tania Constable said the 2018 number was the highest-ever annual export value for the sector and accounted for 72 per cent of Australia’s merchandise exports.

Ms Constable added that 2018 was also another strong year for Australia’s gold industry, with $20 billion of gold exports based on rising production at existing operations and new mines opening up in WA.

The ABS data showed Australia recorded a $22.2 billion trade surplus in 2018, the highest ever for a calendar year.

The federal government said Australia continued to successfully navigate very challenging global trading conditions, having delivered 12 monthly trade surpluses in 2018, and 22 in the past 24 months.

While Australia’s merchandise exports grew 14.1 per cent to $343.9 billion, service industries such as tourism and education also expanded.

China remained Australia’s top trading partner, a position it has held since 2009.

China plays an even larger role in WA’s export industries.

WA exports to China totalled $68.4 billion, or 47 per cent of the state’s total.

That’s not including Hong Kong, which is categorised separately by the ABS – it took $6.9 billion of WA exports last year.