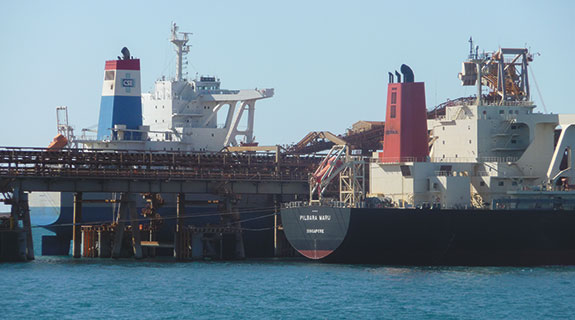 trade: Exports, the lifeblood of the WA economy, are slowing substantially.

Slowing trade with China and Japan has contributed to a10 per cent fall in Western Australian merchandise exports for August, compared with the same period last year.

Coming in at $8.7 billion, it was the worst August merchandise export performance in nominal terms since 2009, and 3 per cent lower than the July figure.

Exports to Japan were down more than 20 per cent for August compared with the same period in 2014, to $1.4 billion.

That brought the figures for the year to August lower at $19.6 billion, making a fall of 17.4 per cent.

Trade to China performed better, although it still fell 5.8 per cent to $4.8 billion for the month against August last year.

At that level, merchandise exports to India were the highest for a given month since May 2013.

Nationally, the trade deficit expanded to $3.1 billion for the month of August, up from $2.8 billion in July.

Commonwealth Bank of Australia chief economist Craig James said the biggest impact on the national trade figures had been an increase in imports.

“Trade deficits may be the norm but what was interesting over the last couple of months is that the widening trade deficit was largely driven by a lift in imports as opposed to a collapse in commodity prices or volumes,” he said.

“Interestingly, consumption good imports have lifted for nine out of the past 10 months and are up almost 20 per cent on a year ago.

“At face value this may be an early sign that consumer activity is lifting and as a result more goods are being imported – a result that was mirrored in the latest retail data.

“However, given the slide in the Australian dollar, it could be that the lift in imports is more likely a price effect (with) the weaker Aussie dollar essentially making it more expensive to purchase imports.”