SPECIAL REPORT: Local firms Azure Capital and Hartleys punched above their weight in 2015 in what was a lucrative year for a handful of top corporate advisers in WA. Click through to see which corporate advisers, lawyers and brokers managed 470 M&A and capital raising deals. 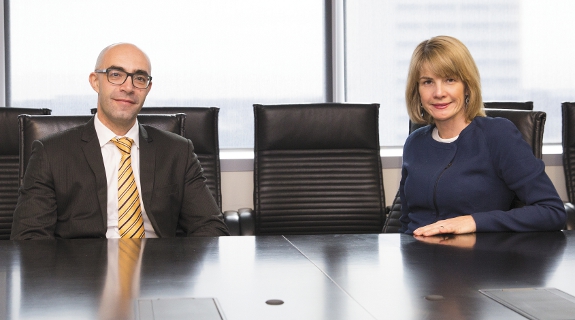 Local firms Azure Capital and Hartleys punched above their weight in 2015 in what was a lucrative year for a handful of top corporate advisers in WA.

Also in this edition's corporate finance feature: WA tech firms raised $132 million in 2015 and and the year's biggest capital raisings.

Corporate finance dealmakers will need to look harder and get more creative to find opportunities in 2016, as commodities markets remain volatile and uncertainty grows over the Chinese economy.

One guide to the period ahead is the recent past.

However, that total was substantially inflated by Woodside’s ill-fated takeover pitch to Oil Seach, and several other failed M&A deals.

The dearth of successful M&A deals was most pronounced in the latter part of the year, with 2015 also characterised by the paucity of big capital raisings. Wellard’s $299 million IPO showed there are still opportunities for well-run businesses outside the resources sector to raise capital.

Another positive was the surge in tech sector capital raisings, which highlighted the opportunity for niche businesses to tap the large pool of risk capital in WA.

In the M&A space, there were two substantial privatisation deals in 2015, with dealmakers hoping for more in 2016.

The Town of Port Hedland sold its airport to an AMP Capital-led consortium for $165 million, while the state government has named the Perth Markets consortium as preferred bidder for Market City in Canning Vale, in a deal speculated to be worth $120 million.

Prospective sales include the Utah Point wharf in Port Hedland, which could yet be stymied by the weak iron ore market, and Fremantle Ports, but there are doubts about whether that will hit the market this year.

In the corporate sector, the long list of failed M&A deals in 2015 signalled the challenge ahead.

Woodside Petroleum, Iluka Resources, Emeco Holdings and Todd Corporation were among the bidders that did not complete announced takeover deals.

“When stock prices move significantly in short periods of time, that makes it very difficult.

“If we can have a period of relative stability, you are likely to see more M&A deals announced and completed.”

Atlas completed one of the larger capital raisings of 2015 ($86 million through Hartleys) to strengthen its balance sheet.

That was short of its target of $180 million, and it still left the company exposed to weak iron ore prices.

It followed this with a debt-for-equity swap announced just before Christmas, which will slash the company’s interest-bearing debt.

The deal, put together by Lazard and JP Morgan, will drastically dilute the stake held by existing shareholders, but means the business has a much better prospect of surviving.

Asset sales are tipped to become more common in 2016, particularly by distressed sellers looking to strengthen their business, but are by no means guaranteed.

Oil and gas producer Santos launched a strategic review last year that was expected to result in major asset sales.

Instead, the Santos board opted for a heavily discounted capital raising, because it didn’t believe it would get a fair price for their assets. 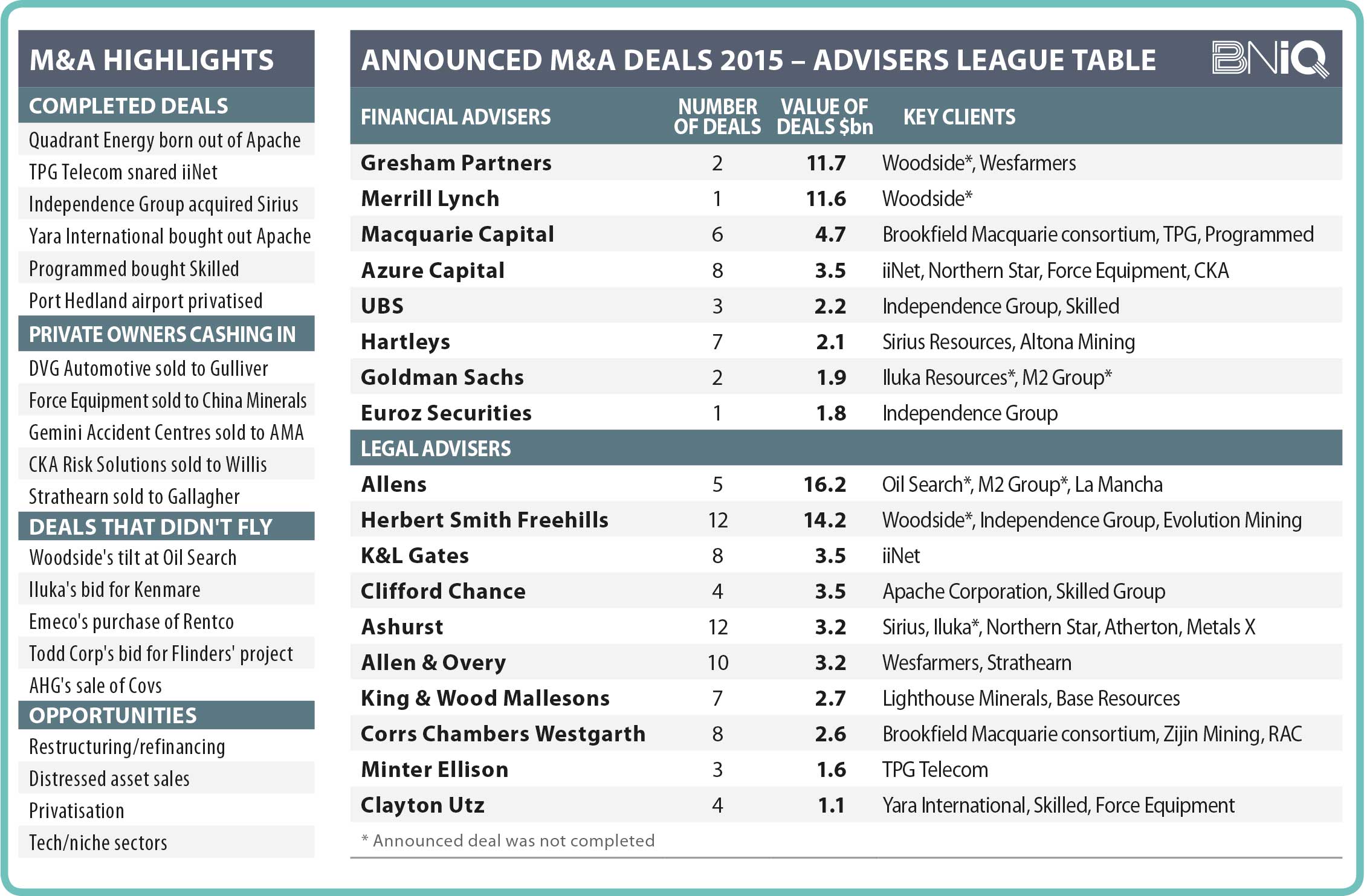 Top of the league

The top corporate advisers in WA in 2015 were global firms Macquarie Capital and UBS and local players Azure Capital and Hartleys.

Macquarie advised on six M&A transactions, including the largest completed deal of the year – the $2.5 billion acquisition of Apache Corp’s local oil and gas business by a Brookfield Macquarie consortium.

Azure Capital had a bumper year, helped by its long-running advisory mandate with iiNet, which was acquired by TPG Telecom after a takeover battle.

It also advised Force Equipment and CKA Risk Solutions, which were among a string of privately owned businesses sold to major national or international players.

Azure also had success in the privatisation field, advising Perth Markets on the purchase of Market City.

Hartleys’ biggest M&A job for the year was advising Sirius Resources on the $1.8 billion takeover by Independence Group.

It also worked on 25 capital raisings.

UBS was on the other side of the Sirius deal, advising Independence Group, and had a lead role on the state’s two biggest capital raisings, for Seven West Media and Wellard.

Gresham Partners and Merrill Lynch topped the Business News M&A league table, but only because they advised Woodside on its Oil Search proposal.

By contrast, the four advisers discussed above worked on multiple deals and had success with nearly all of them.

The top advisers were paid handsomely for their work, judging by the numbers disclosed in takeover scheme documents.

iiNet said its estimated takeover costs were $22 million, with a big chunk of that likely to have been paid to Azure, law firm K&L Gates, EY and other advisers.

Its new owner, TPG Telecom, had estimated costs of $9 million, with Macquarie likely to have been paid the biggest fees.

Sirius Resources said it expected to pay $14.7 million in fees and expenses on the takeover by Independence Group and demerger of S2 Resources.

The recipients would have included Hartleys, Ashurst, BDO and KPMG.

Sirius also disclosed that it would have paid just $2.7 million in fees if the deals did not proceed, which indicates the big upside for corporate advisers on successful deals.

Amcom revealed that corporate advisers – as opposed to lawyers and accountants – take the lion’s share of fees.

It paid $7.1 million to its advisers on the Vocus merger, with Lazard paid $5.9 million and the balance shared among Clayton Utz, EY and others.

Skilled Group disclosed that it expected to pay $5.6 million to its advisers on the Programmed takeover, led by UBS, Clayton Utz, Grant Samuel and Deloitte.

Allens and Herbert Smith Freehills topped the league table for law firms, helped largely by their work for Woodside and Oil Search.

Freehills worked on 12 deals, including for Independence Group and Evolution Mining.

The only other major law firm to work on that many deals was Ashurst, which has a broad spread of mining sector clients, including Sirius Resources, Iluka Resources and Northern Star Resources.

The competing bids for iiNet boosted the deal totals for K&L Gates, Allens and Minter Ellison.

Similarly, the sale of Apache Corporation’s oil and gas assets bumped up the deal totals for five law firms, with the major legal advisers being Corrs Chambers Westgarth (which advised the Brookfield Macquarie consortium) and Clifford Chance (which advised Apache).