Bannister Downs Dairy Company managing director Sue Daubney is aiming to rebuild Azzura Gelati to its former glory after striking a deal this week to buy the local ice-cream manufacturer. 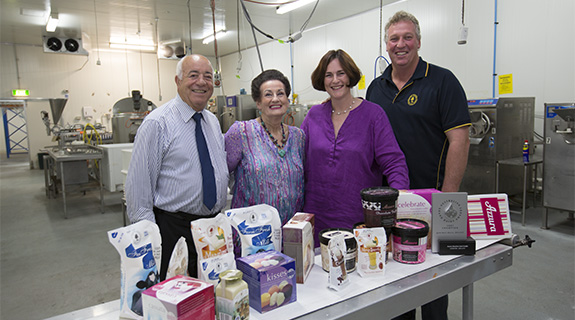 Bannister Downs Dairy Company managing director Sue Daubney is aiming to rebuild Azzura Gelati to its former glory after striking a deal this week to buy the local ice-cream manufacturer.

Ms Daubney said buying Azzura had not been part of her plans when she was approached by co-founders Nick and Rey Odorisio earlier this year.

“They are retired and didn’t want to see it shut down,” she said.

“They got in touch and asked if we were interested in taking it on.”

The change of ownership follows a difficult period for Azzura, which was established nearly 30 years ago in Fremantle and later moved to its current premises in O’Connor.

The business was run by second-generation family members in recent years, before going into administration at the end of 2014.

Ms Daubney is aiming to resume production next month, and get some of Azzura’s most popular summer products back into the market early in the New Year.

“We will be starting from ground zero,” Ms Daubney said.

“Nick and Rey will stay on and help us, it’s their passion and they really want to see it work for us.”

Ms Daubney said she and her husband, Mat, first met the Odorisio family about 10 years ago when they started in dairy competitions at the Royal Show.

“What’s exciting for me is the similarities are so close,’’ she said.

“Both couples starting out on our own, building premises of their dreams and being totally focused on quality all the way through, and having two WA brands wholly and solely made in WA.”

At its peak, Azzura reportedly had annual turnover of about $2 million, with exports to Singapore and local sales through cafes, restaurants and independent supermarkets.

Ms Daubney said Bannister Downs would supply milk and cream to Azzura and would benefit from having many shared customers.

The purchase coincides with Bannister Downs going through final approvals for a $20 million-plus expansion of its Northcliffe dairy.

It involves the installation of robotic milking and fully-automated processing systems to support a four-fold increase in production volumes, along with new retail and hospitality facilities.