Sales of new cars fell 10.5 per cent across Western Australia in October on the previous corresponding period, despite a 3.4 per cent uptick nationally for the month. 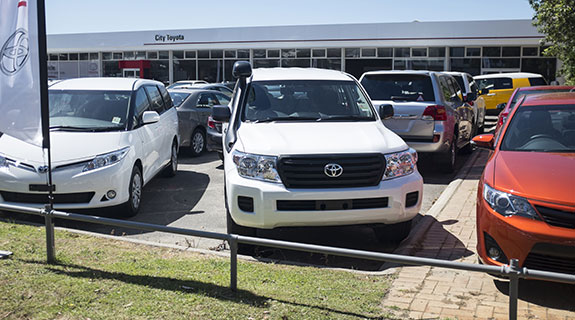 Sales of new cars fell 10.5 per cent across Western Australia in October on the previous corresponding period, despite a 3.4 per cent uptick nationally for the month.

The 8,500 new cars sold in WA last month marked a slight improvement on the September 2015 sales figures, but were significantly down on the October 2014 result, while national sales rose 3.4 per cent with 94,321 vehicles sold, according to the Federal Chamber of Automotive Industries.

Toyota continued to dominate the market with 1,629 new cars sold in WA in October, however that’s 26.3 per cent fewer cars than what it sold in October last year.

Hyundai was the second-best performer again, with just over 1,000 cars sold.

Holden had a rough month with 10.1 per cent fewer cars sold in October to 701 sales, while Ford improved on its poor result in September with 603 sales.

Toyota has sold the most new cars in WA this year with 17,556 as of October, with Hyundai at second with 9,841 sales and Holden close behind with 7,557 sales.

Sports cars continued to improve, with Ferrari sales up 38.5 per cent in the year to date (despite only one sale last month), while Lamborghini sales have surged by 125 per cent this year.

Porsche sales have also improved, up nearly 50 per cent on the previous year to October with 308 new cars sold.