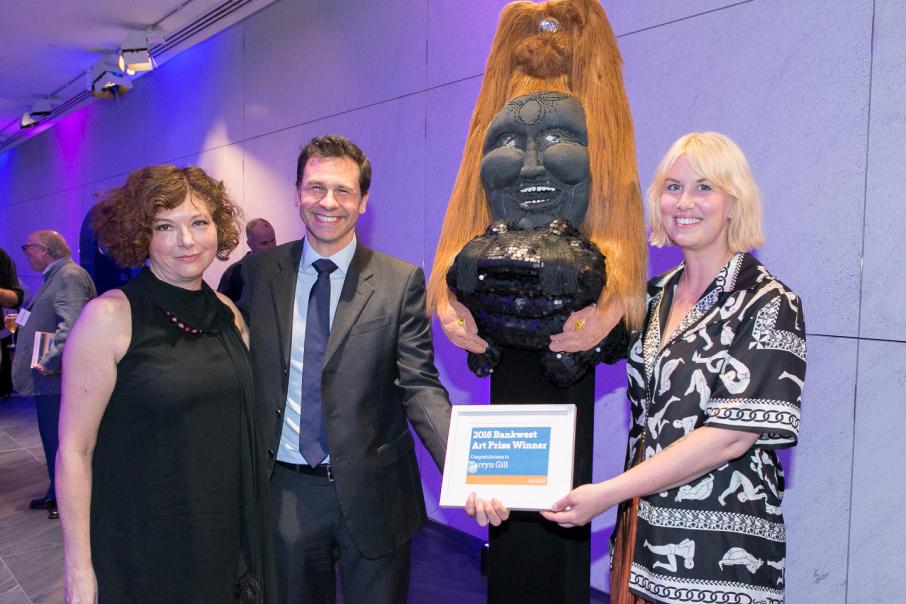 The award was presented at the opening of the 2016 Bankwest Art Prize exhibition in Perth last night, with Ms Gill winning for her work titled Guardian Totem (with Toad).

The winning piece will be included in the Bankwest Art Collection, one of the state’s most significant corporate art collections featuring works by more than 450 Western Australian artists.

The Bankwest Art Prize series, which started in 2001, is open exclusively to WA artists, and Bankwest managing director Rob De Luca said the business had been a long-time supporter of the arts.

“I am thrilled to see the art prize continue to thrive in 2016, which is testament to the accomplished field of visual artists in our state,” he said.

“It’s pleasing to see the art prize continue its support of WA artists and to provide them with the opportunity for their works to be displayed in a professional gallery in their home state.

“We are honoured to add Tarryn’s winning sculpture to the Bankwest Art Collection.”

The inaugural sculpture prize took place in 2014 and is a biennial award that alternates with the prize for two-dimensional pieces.

Ms Gill, who is Perth-born and trained at Curtin University, was one of 16 finalists from an original pool of 60 submissions from artists across the state.

She said her piece was taken from a series that began following an artist residency undertaken at the Freud Museum in London.

“After being privy to the collection of antiques in Freud’s study I was inspired to create soft sculptures, which appear like seers or prophets,” Ms Gill said.

“These works combine my personal memories with characters drawn from mythology, pop culture and funerary art to activate a space between the earthy and other-worldly.

“I want to thank Bankwest; this kind of support for the art world is so important as in my case winning gives me the opportunity to spend more time working in my studio.”

The 16 finalists’ works will remain on display at Bankwest Place in the city, where the exhibition will be open to the public until March 10 next year, with patrons invited to vote for their favourite piece.

The people’s choice award will be announced March 13 with the winner to receive $5,000.