Under new PM Malcolm Turnbull, WA has numbers in cabinet not seen since the Hawke-Keating era. 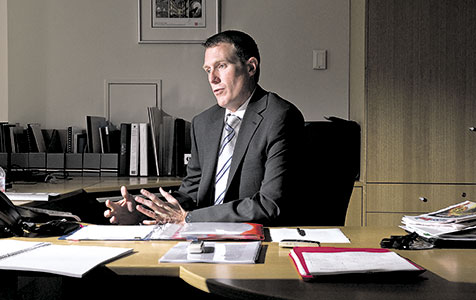 NEW POSTING: Christian Porter has had a rapid rise through Liberal ranks at a federal level.

Now that Western Australia has its strongest presence in the federal ministry for 25 years, the pressure will go on the coalition government to reward the state with an appropriate dividend.

With Michael Keenan retaining the justice portfolio, and Ken Wyatt becoming the first Aboriginal MP to hold a senior role as assistant health minister, it’s the most senior WA line up since the Hawke-Keating Labor days.

So the WA Liberals have finally reaped a dividend from their federal cousins for their strong support, both electorally and financially, over the past five years. The next challenge is a reward for voters.

This has nothing to do with what South Australia is holding its hand out for – a big fat naval contract to cost taxpayers billions of dollars more than if the craft were built elsewhere.

Why South Australia? Because the Liberals there are in dire straits, and fear losing seats to a party linked with the energetic senator, Nick Xenophon.

Fortunately for taxpayers, shipbuilding in WA is a lean and efficient operation, led by Austal at Henderson, south of Fremantle. Former defence minister David Johnston paid the penalty by being dumped after expressing exasperation with the high-cost operation in South Australia. He simply, although rather inelegantly, said what others knew.

There is optimism that some federal money might now flow for urban rail extensions in the Perth metropolitan area. And the voters in the recent Canning by-election endorsed a promised $100 million plus upgrade of the busy Armadale Road.

There’s an economic and political imperative for targeted federal spending in WA. From the economic perspective, the bulk of the money ends up where it’s meant to go. It’s not siphoned off into areas that reward inefficiency; there is a minimum of pork barrelling.

On the political side, WA’s Liberal representation in Canberra has reached a high-water mark. Twelve of the state’s 15 House of Representatives MPs are Liberals, as are half the 12 senators. That gives the Liberals 18 out of the 27 MPs the state has in the federal parliament. Labor has just six (three in each house), there are two Greens senators, and one from the Palmer party.

If the Liberals are to retain this extraordinary presence, the state must have something to show for it by way of federal initiatives.

The Canning by-election showed that voters are prepared to swing back to Labor if that party presents a credible candidate and policies, backed by a well-resourced campaign.

The first opinion polls after the by-election and the Turnbull leadership coup showed a bounce in support for both the government and the new prime minister. Any other result would have been a disaster for the plotters, of course.

But how long will the Turnbull honeymoon last? The new prime minister has stressed he leads a 21st century government, and the future is laden with opportunities if Australians are prepared to grasp them. It’s the positive way of saying the world doesn’t owe us a living.

So Mr Turnbull’s challenge now is to provide the economic leadership that he promised, and place his new look team into a winning position to fight an election due within 12 months. It won’t be easy despite the general view that the coalition stocks have picked up.

The political reality is that once the Turnbull team starts making decisions, no matter how necessary they might be, someone is always upset. That will test Mr Turnbull’s nerve.

It will also influence whether the WA Liberals can continue their dominance in federal representation.

Labor's candidate in Canning, lawyer Matt Keogh, achieved a 9 per cent jump in the party's primary vote against the Liberal victor, former SAS officer Andrew Hastie, who proved to be a candidate out of central casting. Both spoke impressively on election night.

With the federal redistribution under way to give WA a 16th seat in the lower house, Canning becomes notionally stronger for Mr Hastie. But the proposed new adjoining seat of Burt, based on Armadale and Gosnells – traditional Labor territory – looks a likely Labor gain, provided the party plays its cards right.

Mr Keogh expressed interest in running again, and his party would be smart to sign him up for Burt.

Whether he could then repeat the swing he gained in Canning might well depend on how successful the WA Liberal ministers are in delivering for their state. The voters will be watching.