Sharing experiences and a supportive network are helping a special group of Western Australians. 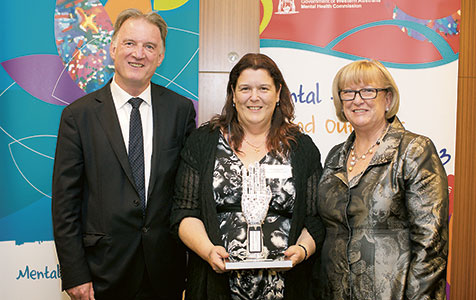 WA Hearing Voices Network coordinator Amanda Waegeli has received the Mental Health Good Outcomes award for involvement and engagement in recognition of her commitment to the sector.

The awards acknowledge innovations and significant contributions to the mental health sector by organisations and individuals across 12 different categories.

Ms Waegeli said the award also recognised the voluntary work she undertook outside her role at the Hearing Voices Network, namely through the community group Recovery Rocks.

Ms Waegeli formed the group almost two years ago and still runs the monthly meetings in her backyard.

The meetings attract a regular gathering of more than 50 people, comprised of those who hear voices and their support networks.

“It’s a really safe place to stay focused and celebrate the small steps along the way to regaining your life,” Ms Waegeli told Business News.

“We’re building a community rather than a creating a service”.

Recovery Rocks follows a similar approach to the Hearing Voices Network, which maintains that people who hear voices have a greater chance of reaching recovery through sharing their experiences and coping strategies with one another, rather than relying on solutions such as medication.

With thousands of member in 21 countries, the international Hearing Voices Network believes there’s widespread misunderstanding of the number of people who hear voices and effect it has on their lives.

While hearing voices is the most common ‘hallucination’ experienced by schizophrenics, up to 5 per cent of the population hears voices but is otherwise healthy. The network aims to destigmatise the condition among this cohort and prefers to deal with the voices by way of acceptance and negotiation techniques.

The WA branch of the Hearing Voices Network was recently launched off the back of the Australian network, which was established by the Richmond Fellowship of WA (RFWA) in 2005.

The network originates from the efforts of Dutch psychologist Marius Romme in the 1980s, following his work with a voice hearer who claimed Dr Romme doubted the voices’ authenticity.

This led to Dr Romme challenging a lot of traditional thinking and the forming of several Hearing Voices Networks across Europe.

Ms Waegeli is a recovering voice hearer herself, and has worked in many government and non-government organisations that offer mental health services.

“I think through my experience of working in the sector I was recognising that a lot of these services are temporary, they’re not actually providing the support that people really need,” she said.

“What makes them (RFWA) stand out from other non-government organisations is they have been promoting recovery for many years now.”

RFWA offers those suffering from mental health conditions accommodation, education and other support activities tailored to their needs in order to help them re-join their community.

For several years, RFWA has been actively campaigning to reform the state’s outdated Criminal Law (Mentally Impaired Accused) Act in order to channel those suffering from mental health conditions away from prisons and into institutions.

Ms Waegeli has been making progress in this area, and in the coming weeks prison staff at Acacia Prison will undergo training with the aim to set up a Hearing Voices peer support group within the prison.

Ms Waegeli has recently established similar groups in Mandurah, Midland and Esperance, bringing the total in WA to 10.