Western Australians donating household items for people affected by the bushfires in the South West have been so generous that St Vincent de Paul Society WA has been inundated with goods exceeding its capacity to deliver them. 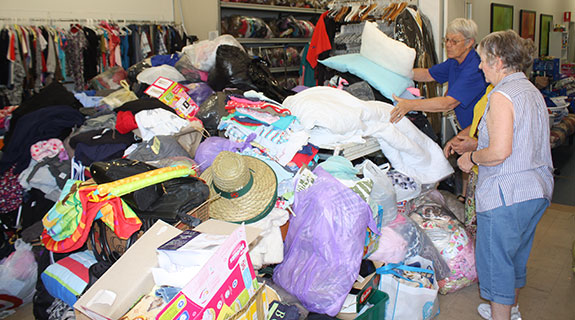 Western Australians donating household items for people affected by the bushfires in the South West have been so generous that St Vincent de Paul Society WA Inc has been inundated with goods, exceeding its capacity to deliver them.

Vinnies chief executive Mark Fitzpatrick said the charity was very grateful to people who had been overwhelmingly generous.

“It is testament to the incredible Aussie spirit during times of hardship,” he said.

However, people have dropped off so many goods in Vinnies shops, especially in Waroona and Pinjarra, that even with volunteers being recruited from Perth, it did not have the capacity to sort and deliver all the items.

“We have had people from all over the state drive down to our shops to drop off goods and the want to help is incredible; however we would ask that people hold on to their donations for the time being,” Mr Fitzpatrick said.

“The best way for people can help is through financial donations.”

He said these could be made to Vinnies bushfire relief fund or the Lord Mayor’s Distress Relief Fund.

The boxes, which thanks to community donations resulted in more than 7,000 kilos of food being donated to Foodbank WA (equating to more than 14,000 meals) and more than 7,500 gifts being given to Anglicare WA who distributed it to people in need, are still accepting material goods donations at 10 locations.

Boxes in the city can be found at Parmelia House, London House, and Carillon City. There are also boxes at Claremont Quarter, The Mezz shopping centre in Mount Hawthorn, Noranda Shopping Village, Bassendean shopping centre, The Park Centre in East Victoria Park and Melville Plaza in Bicton.

Hawaiian chief executive Russell Gibbs said Hawaiian was also accepting cash donations at its Cable Beach Club Resort & Spa in Broome, through its donation point, which is registered with the lord mayor’s appeal.