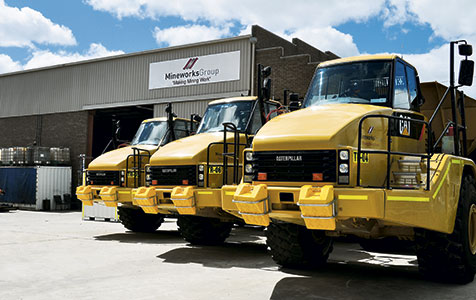 HEAVY LIFTING: Viento has secured an equipment fleet with a 62 per cent stake in Mineworks: Photo: Viento

They had visions of creating a new mining services business, and decided Viento was the vehicle they would use.

The reinvention of Viento has taken longer than its new directors had anticipated because their plan, like that of nearly everyone else in the sector, was affected by the slowdown in mining construction activity.

They remain confident they are on the right path, however, with a business model they believe is ideal for the times.

"What the clients want now is clever solutions to find cheaper ways to do their work," Mr Farrell said.

"You have to be lean, have low overheads and give the clients better solutions."

Messrs Farrell and Silverthorne developed their plans during 2011, when they spent eight months travelling around Australia on a boat.

"We came to the view that we ought to have another go at it, in the mining and resources space," Mr Farrell said.

"John and I felt there were some outstanding people out there who were great at doing their work but lacked the money, the influence, the contacts."

The two men make an interesting mix. Mr Silverthorne had an outstanding track record at NRW, which he co-founded with Jeff McGlinn in 1994 and helped to build into one of the state's leading mining contractors, whereas Mr Farrell's resume

includes, by his own admission, a patchy record at engineering contractor VDM.

The first public sign of change at Viento came in May 2011, when Hanscon Holdings subscribed for nearly $1 million of new capital. Days later, Mr Farrell joined the board.

Hanscon is a vehicle for Hans Versteeg, who sold his Malavoca business to VDM and remains a major player in the civil contracting sector.

He has since been joined on the Viento share register by Calibre Group founder Ray Munro, and Steve De Mol, who sold his Action Mining Services business to NRW.

Viento has raised a total of $6 million over the past year giving it the capacity to make one small acquisition and fund its start-up businesses.

It acquired a 62 per cent stake in Mineworks Group, which had a workshop, a fleet of equipment and a team of 80 staff.

Mr Farrell said Mineworks has good prospects in its own right but also gave the group the capability to offer a wider range of services.

Mr Farrell said there are plenty more changes on the way at Viento.

It is looking at an acquisition to bolster its utility services business, and John Silverthorne is looking to build a mining services arm.

Mr Farrell said Viento's strategy was informed by lessons he learned at the loss-making VDM, which made more than a dozen acquisitions.

"Everybody agreed the model was right, but everybody underestimated the difficulty of integrating that many people together, and the people politics that went with it," he said.

Mr Farrell said Viento had slowed its growth plans as a result of changed market conditions.

"We didn't expect the market to deteriorate as much as it has, so we haven't rushed as hard as we might have done," he said.

"But I don't think the outlook is anywhere near as bad as people are saying; in the new (financial) year it will probably start to improve and it will probably be quite healthy over the next few years, but we won't reach the giddy heights again."

At a corporate level Viento is planning to appoint a new chairman to replace the long-serving Rob Nichevich, and that will be followed by recruitment of a new chief executive.