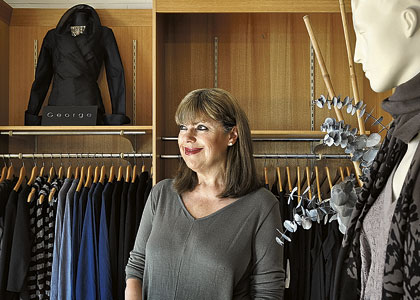 LOYALTY: Christine King says a key to her success is to not overwhelm shoppers with too many options and being a reliable source of brands. Photo: Grant Currall

Christine King was 18 when she decided to steer away from a nursing career and forge a path in the rag trade, a move that set her up for a 45-year long retail career.

She spent 14 years in her first store, Twelve Twenty in West Perth, before five years of trade in Shelley as Christina’s and her final destination, Cottesloe, where she has had a store for 26 years.

It is not the biggest retailer in town, but Ms King’s success is better measured by her longevity in the retail trade. She puts her ability to flow with the tidal shifts of the fashion industry down to lessons learnt along the way.

Fine merino garments line the shelves of Christina’s and she stocks a maximum of four brands, a distinct part of her strategy to create a following.

The idea is not to overwhelm shoppers with too many options and to create loyalty by being a reliable source for brands.

“At one time I really had to sit down and consolidate because I realised I had too many labels,” Ms King said.

“You don’t need a lot of labels, that is my secret formula – work with a label if you like it and see what works,” she said.

In the early days at Twelve Twenty, brands were not represented by agents in Western Australia as they typically are now.

Ms King went on regular buying trips to the eastern states, stocking her store with myriad brands and styles – the opposite approach to her current strategy.

“It was early days for fashion here and it was quite a learning curve,” she said.

It suited her business at the time, which was one of the first boutiques in West Perth and catered to a broad demographic with varied needs.

“I had all sorts of labels and the rich and famous coming through there, it was fabulous,” she said.

“In those days there was very little competition, I was one of the first retailers around really.”

Since Ms King started the business, the biggest shift has been in the level of competition in the fashion industry.

“There are too many labels and too much of everything, we are over catered for,” she said.

“Even more so with the internet, which doesn’t really affect me because I have a clientele that loves the brick and mortar retail, they love to touch.”

The Cottesloe store first focused on catering to mothers of the bride. Today, Ms King’s brand focus caters to her Cottesloe demographic, which is more often looking for leisure and travel wear.

“Our lifestyle has changed and so has the economy, so you buy things that are affordable,” she said.

“I am very passionate about my labels, what I have represented. Where I am now, I only have four labels that really work for me, I had mother of the bride and have gone through the whole process but people want more leisure wear.

“You have got to move with the times, listen to the public and their needs.

“The new consumer is really assertive and they buy for what they need, not necessarily what they want these days.”

The retail sector was experiencing trying times on the back of shrinking discretionary spending but Ms King said that was par for the course.

“You have to ride with it, take the good with the bad and be patient,” she said. “We had this in the 1980s, people have realised they are spending beyond their means and are pulling back. You have just got to work with that.”