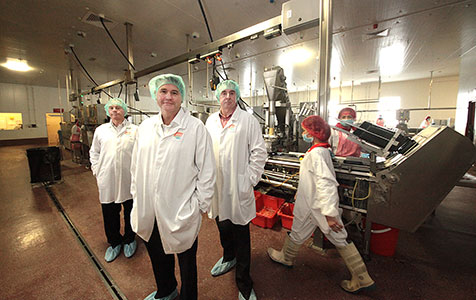 Vesco's successful turnaround has been founded on a clear and structured strategy.

Frozen meal manufacturer Vesco Foods has proved a refreshed approach and clear strategy can transform a battling business into an impressive growth story.

The business has been named a runner-up in this year's Business News Rising Stars awards on the back of a doubling of revenue in just three years.

Chief executive Bernie Pummell doesn't like to hark on Vesco's years before and during the GFC – between 2006 and 2009 the company's revenue dropped significantly as it struggled to retain market share.

What followed was the purchase of Australian Consumer Foods and a subsequent de-merger from the Melbourne-based company.

"Certainly there's been a turnaround in the business over the last five or six years," is all Mr Pummell would say about that uncertain period.

For the 2009-10 financial year, revenue was just more than $45 million. That's since rebounded to just less than $85 million and the company is expected to crack $100 million over the coming financial year.

Mr Pummell said a rejuvenated business strategy instigated by CHAMP Ventures instilled a new dedication to narrower product focus and growing business with established clients, which led to the significant improvement in turnover.

"There was a realisation that we had a terrific network of key customers that we could significantly grow our business with, provided we developed those partnerships successfully."

Those key clients include large retail chains, which have helped Vesco capture a significant share of the ready-made meal market.

Its 'On the Menu' product was launched three years ago and has been one of the largest drivers of the company's growth.

"We identified opportunities in the market where there were gaps that Vesco could take advantage of, and the business had the innovative and creative capability to execute on those opportunities," Mr Pummell said.

In a fiercely competitive industry, he said Vesco's ability to adapt and differentiate itself were characteristics that have proved successful.

"We have proved that you can be successful in this very competitive, ever-changing industry, but you have to change your business for it to fit into that competitive industry; you need to be able to look forward and adapt before it comes."

Driving costs down through more efficient production methods enabled Vesco to fund growth into new sales channels, such as the petrol station and convenience store market.

Alongside the impressive revenue growth has been a doubling of the business's staff, with 310 people now employed by Vesco.

Mr Pummell said sourcing labour was one of the most significant challenges.

"But one of the good things about success is that it helps you to attract the right people, and Vesco has become a preferred place to work," he said.

"Obviously the cost of labour in Australia is an issue for manufacturing (we've seen plenty of examples of that) and that's something that we can't do much about, so to ensure we're competitive we need to do all the things we can to ensure that we are competitive."

Staff engagement was the key to ensuring the business remained stable and that the rapid growth didn't get out of control.

"We share with our employees how the business is performing on a regular basis," Mr Pummell said.