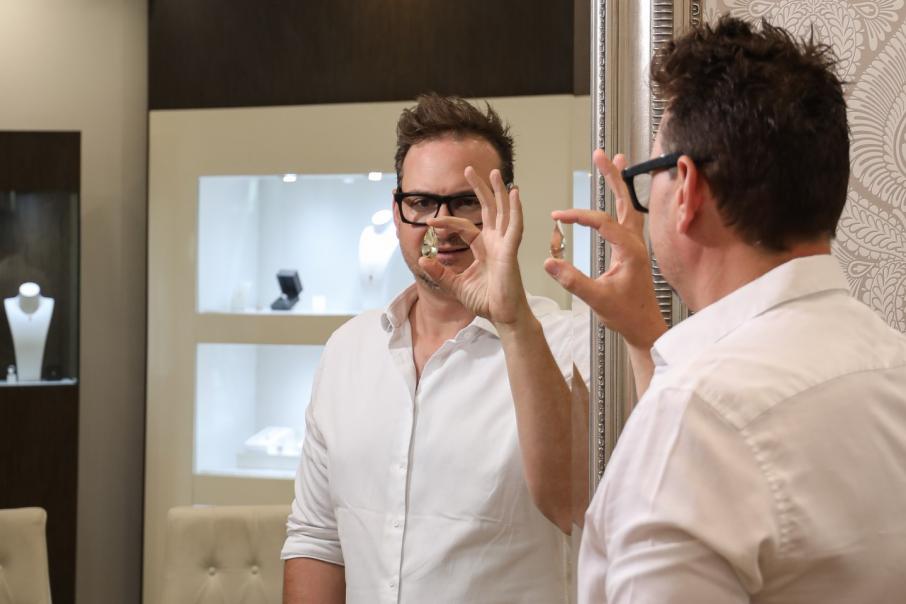 As owner of Rohan Jewellers, a Leederville-based boutique and bespoke jeweller, Mr Milne remembers the heady days of the mining boom, when 20-somethings would visit his store to buy pieces worth more than $25,000.

These days, given the changed economic conditions, customers are far less likely to splurge on niceties like diamond necklaces and earrings.

While the state’s financial fortunes have informed Mr Milne’s conservative approach to financial management, they have also been the impetus for Vela Jewellery, his latest venture and collaboration with former Kailis Jewellery head jeweller, Simon Henderson.

Speaking with Business News, Mr Milne explained that the idea for Vela arose after he and Mr Henderson had sourced an array of uncut Argyle Champagne diamonds directly from Rio Tinto’s Argyle mine.

Interacting with an existing network of business partners, Messrs Milne and Henderson contracted an overseas manufacturer to produce pieces, keeping the final product below $1,000 and broadening the availability of what is generally considered a luxury item.

“A lot of jewellery that sits in that price bracket isn’t worth much; you’re buying a brand name,” Mr Milne said.

“We could go and buy a brand and sell it through a shop, but that’s not what we do.

“I didn’t become a jeweller to push the level of quality I do, just to bring in a brand because it fits a certain price level.

“The price point was one of the key factors we worked within, and we figured out how to get the product to fit and then how to make a profit.”

Mr Milne said affordability was a founding principle for Vela Jewellery, which sources the Argyle Champagne diamonds and Australian South Sea pearls used in its pieces directly from the source.

The brand, which has been available online since November, charges no delivery fees or other costs above the stated price, and eschews Mr Milne’s standard practice of crafting jewellery in his workshop in favour of having the work performed by an overseas manufacturer.

In doing so, Vela has managed to scale back on the costs that traditionally make high-end jewellery so expensive.

While Mr Milne still believes in the value of the handmade pieces he sells in his bricks-and-mortar store, he argued that his new venture would appeal to those who aspired to own high-end jewellery but who could not afford it.

“I’m in the end of the market where any sort of negativity affects how people spend,” Mr Milne said.

“We’ve seen a change in spending, which is directly associated with how the economy is perceived.

“[Vela] isn’t three months of your salary you have to spend; you can spend whatever you’re comfortable with.”