Plugging the funding gap for disadvantaged kids is a key issue for Variety WA chief executive Tony Hume, who has had to make some significant decisions on the future direction of the charity during his six months in the role. 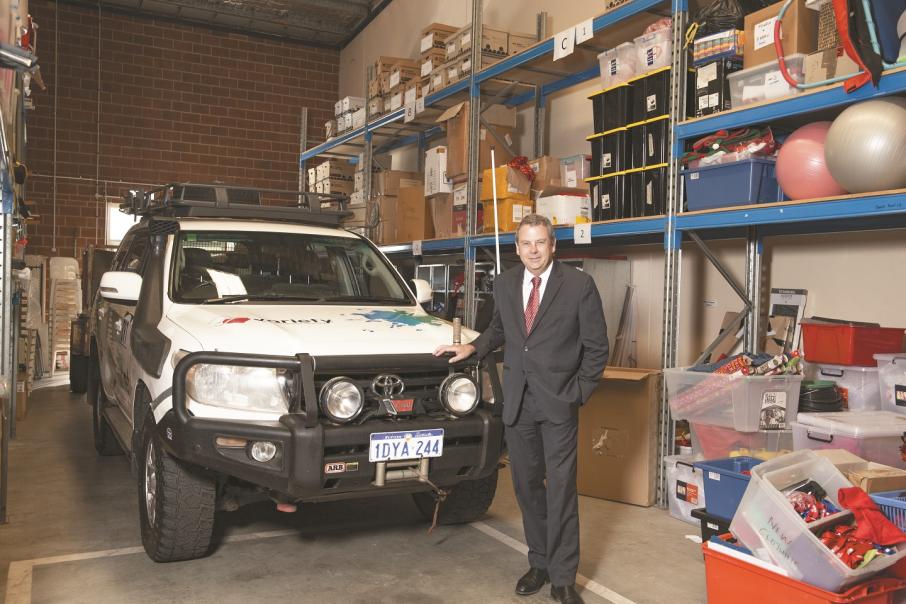 It is perhaps ironic that, as many charities seek out new signature events to boost their profile and finances in a tight market, one Western Australian not-for-profit group is tuning up for the fourth decade of its major fundraiser.

Children’s charity’s Variety WA’s longest running and best-known event is the Variety WA Bash, which has raised more than $33 million in the 30 years it has been held.

Like Variety Bash events in other states, participants in the WA Bash join a convoy of themed vintage cars that drives through the regions, stopping in towns along the route and contributing financially to local schools. The convoy and associated events inject an average of $10,000 into each town they visit.

“It first started when Dick Smith got a few of his mates and decided to drive crazy cars in the regional areas over east, and it has grown from there,” Mr Hume told Business News.

“We’ve had 30 of the events in Western Australia, and we get out and about in the regions extensively.

“In each town we go to we stop at the school, give them some gifts, put on a show for the kids, and bring the cars out to the oval for the kids.

“Each of the car entrants will typically fundraise for the entire year, and they contribute quite significantly to come along, so each one on average would bring in several thousand dollars.”

Aside from fundraising, Mr Hume said the Variety WA Bash was intended to engage kids through entertainment.

However, while the Variety WA Bash had achieved significant longevity in the events space, Mr Hume acknowledged that, like other charities, Variety WA also was aware of the need to be strategic with its events scheduling.

The demise of Variety WA’s Carols by Candlelight in 2018 was a case in point.

The Christmas show was dropped last year despite good attendance, after Mr Hume decided the financial risk was too great.

“The model wasn’t right,” he said.

“It’s a beautiful event, and it’s a great time of the year for community, but at the end of the day our charity, a kids’ charity, was taking the financial risk.

“These events are really expensive to put on, because you’ve got to have road closures, security, off-site power.

“Last year I was staring down the barrel of the charity losing a lot of money, and I could see it would be a huge financial burden.

“I thought, ‘That’s not actually our core business’.”

With an event cost above $500,000, Mr Hume is confident that his solution – a collaborative concert with the WA Symphony Orchestra, which attracted around 30,000 people – was the better choice.

“Not a lot was lost from that perspective, and the charity didn’t have to have the financial burden around its neck,” Mr Hume said.

“Really, I shouldn’t be risking any of the charity’s finances for something that isn’t helping kids.

“The carols didn’t have enough elements for me to feel comfortable that it was safe to do.”

Mr Hume said the community backlash had been strong following the carols cancellation, particularly because it was difficult for the public to see the full cost of the event.

“There was so much interest there because people love it, but the model had got so out of whack,” he said.

“I don’t know how we got to a position where a kids’ charity was the one responsible for having to bankroll that.”

Variety WA has a broad scope of services, but its core business is to assist children facing sickness or disadvantage, particularly through the provision of grants and scholarships.

“We often find we’re the last port of call for these families,” Mr Hume said.

“They may have gone to the NDIS for help, but it never matches the funding they need, so we provide grants and scholarships to give the kids opportunities they wouldn’t have otherwise had.”

With events performing well, Mr Hume is now focused on expanding individual and corporate support to plug funding demands that are nearing $2 million.

“Last grants round we were only able to grant a third of the applications that came into us, because we didn’t have enough funds,” he said.

“That says to me the area of disadvantage is getting bigger, but our ability to meet that has got a long way to go, and we need a lot more support.

“It does cost to keep a charity running, so general support to help us function is really important and a game changer for us.”