Transport investment is budgeted to be $11.7 billion through to 2024, but not all proposals offer obvious value. 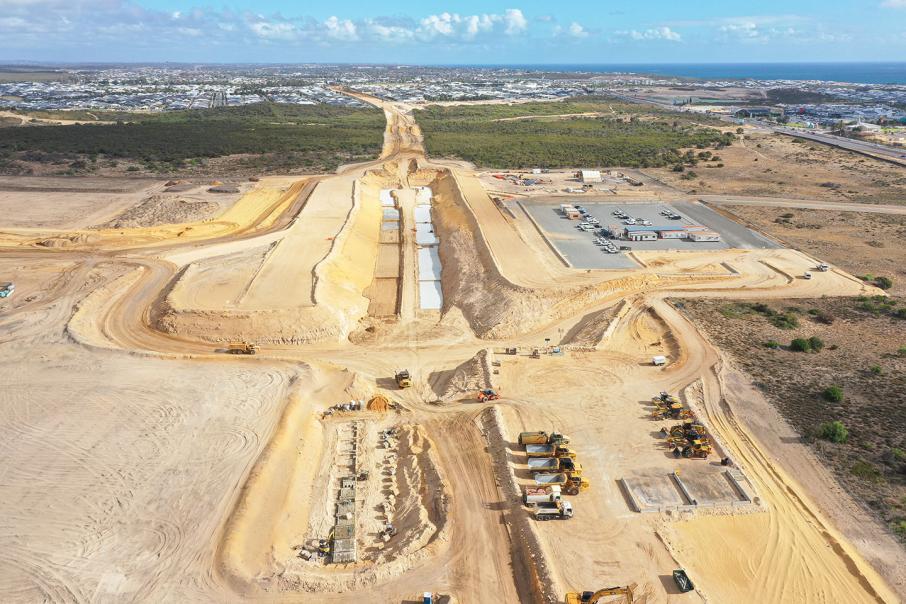 It is about 120 kilometres from Yanchep to Mandurah, destinations that will mark the northern and southernmost points of Perth’s rail network when the newest track extension is completed.

And the journey could cost a maximum of $4.90, with a public transport fee cap from January 2022 promised by WA Labor if it wins the March state election.

As a point of contrast, a direct route from Charing Cross in London to the coastal town of Dover in south-east England is 115km, with a one-way ticket costing £11 ($A19.65).

That demonstrates the spread of the Perth network.

Given Perth’s standing as a low-density city, stretched along the coastline, investment to connect those new areas has been a priority for the state government.

The aforementioned rail extension from Butler to Yanchep, a $520 million project to build 14.5 kilometres of track, is one example.

There are five new railway lines under way or planned, worth a combined $4.7 billion.

In total, the state budget provisioned $6.2 billion of rail investment through this financial year to June 2024.

Added to that will be $5.5 billion on roads, while a $4.5 billion port development in Kwinana is expected in the longer term.

Just weeks out from the election, the state opposition has alternative priorities: building an extension of Roe Highway, sinking part of the Fremantle Rail line, and subsidies to encourage uptake of hydrogen and electric vehicles.

The two main parties have both promised higher subsidies for public transport users.

The Liberal Party said it would introduce free public transport for school kids and seniors, at a cost of $56 million a year.

Labor has promised to reduce Perth’s nine public transport zones to two, and cap fees at $4.90.

That would increase subsidies to the Public Transport Authority by about $60 million annually, and perhaps shows a change in thinking from the past election.

In the 2017 election, a portion of the Metronet rail package was to be financed through value capture, where land developments close to the new rail lines would pay a levy.

The levy is financed by the price rise of the properties driven by service improvements, meaning those who benefit most from the infrastructure contribute more to its cost.

The government has since reverted to a more traditional position, where the capital investment is covered more broadly through the budget and federal grants.

While it is commonly believed cheaper public transport supports low-income households, the evidence is less clear.

A 2019 report in the European Transport Research Review assessed subsidies in the Norwegian capital of Oslo.

It is understood the PTA has not surveyed ridership income levels.

“In light of COVID-19 and declining public transport ridership, any incentive to get people back [is good],” Ms Fulker told Business News.

“We’ve gone back to more driving because we want to be in a cocoon.”

As new infrastructure was being built, such as Metronet, it was important to ensure high-capacity utilisation, she said.

Increased public transport use could help reduce road congestion, with a 2019 Infrastructure Australia audit forecasting traffic would cost Western Australia $3.6 billion in 2031, double the level of 2016.

The cost of public transport congestion was also forecast to rise, to $159 million by 2031.

The biggest beneficiaries of the fare cap will be those who travel to and from outer suburbs.

PTA data obtained by Business News shows about 17 per cent of weekday ticket purchases before COVID-19 were for three zones or more, 4 per cent were day riders, and 22 per cent were student trips.

The broader theme of density versus urban sprawl was the subject of debate among planners, according to Curtin University associate professor of spatial sciences Cecilia Xia.

A further equity impact is through property values. For example, it has been reported property prices close to station precincts on the Mandurah rail line rose up to 40 per cent over the course of that project. 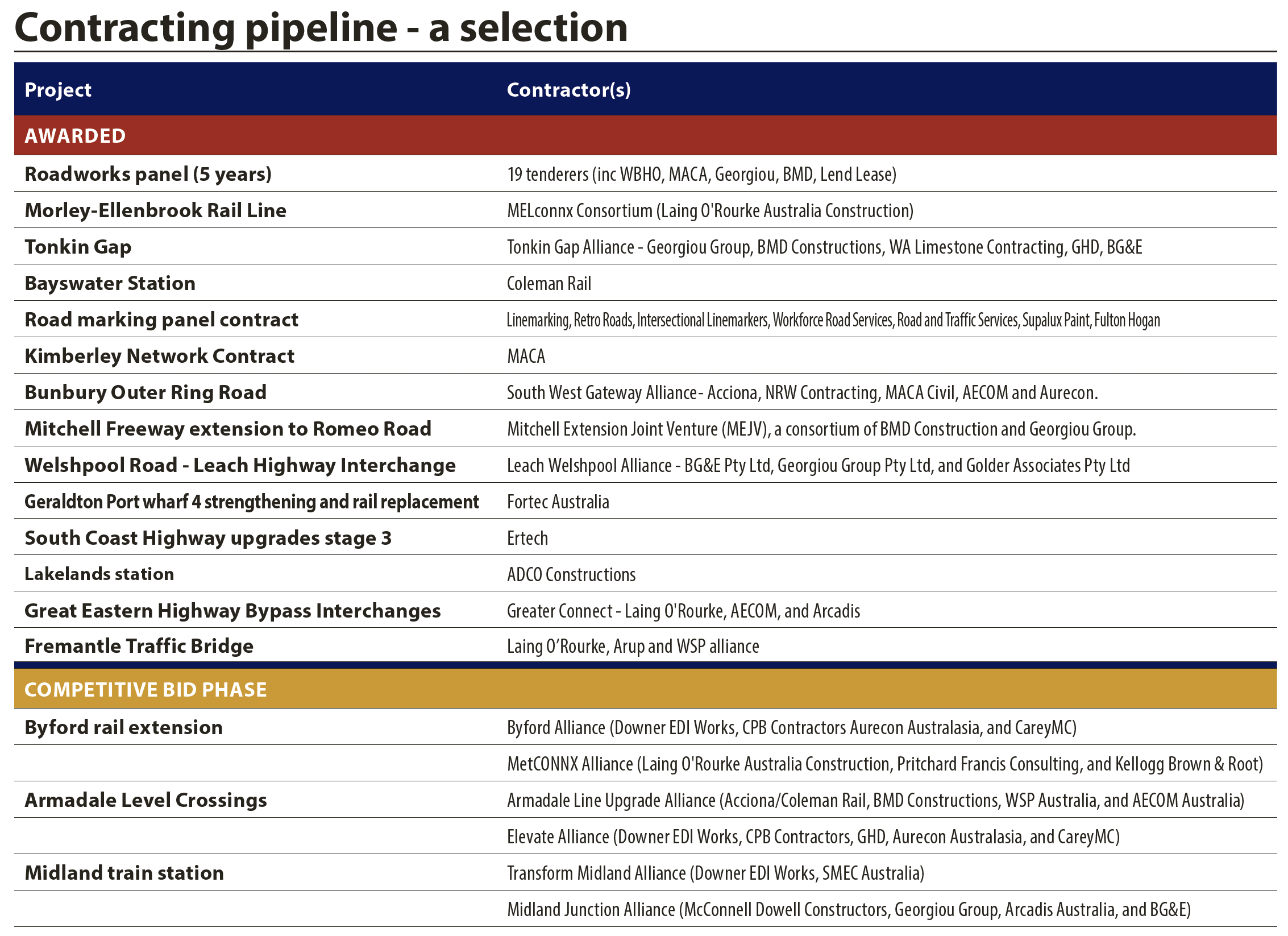 Both federal and state governments have touted rail and road construction as a COVID-19 recovery stimulus.

But the projects vary wildly in their benefit to the community, according to reports from Infrastructure Australia.

The documents outline the state government’s estimates of community benefit against the cost to deliver a project.

Projects with a score below one are not considered an effective use of funding, with at least three WA projects failing to meet the criteria.

All were rejected by Infrastructure Australia when nominated for its priority list.

Analysis of the Byford rail extension submitted by the state government showed a benefit-cost ratio of 0.45 and shortfall of $380 million (measured by net present value).

Even that may be optimistic, Infrastructure Australia said in an October review.

The low benefit ratio indicates other projects should be prioritised ahead of the Byford extension.

Nonetheless, both the state’s transport minister and the federal urban infrastructure minister have confirmed to Business News they will continue to fund the $481 million project, in a 50-50 split.

Six level crossing removals proposed as a package on the inner Armadale rail line had a benefit-cost ratio of 0.36 and a shortfall of $569 million.

A third project, the Albany ring road, posted a benefit cost ratio of 0.71 and shortfall of $38.3 million.

While those three were rejected, some projects scored highly.

The Yanchep rail line was assessed as a high-priority project in October 2018, with the state’s business case showing a benefit ratio of 2.6.

While IA said it was confident benefits would exceed costs, it warned against encouraging people to live in outer urban areas. It said the project could encourage urban sprawl and move population centres away from commercial hubs.

Among the road projects strongly favoured by the independent umpire were the Bindoon bypass (benefit ratio of 3.4), and Armadale road bridge (3.0).

The Forrestfield airport rail link, launched by the previous state government, had a ratio of 1.4, while the Morley-Ellenbrook rail line was 1.1 and the Thornlie-Cockburn link 1.2.

For the Ellenbrook line, IA said benefits might be overstated and would likely be close to the costs.

For comparison, when the Roe 8 highway extension was assessed in 2015, it scored 2.5.

While that may be heartening for a Liberal opposition that wants to revive the project, another of the party’s proposals came under fire.

In January, the Liberals promised $5 million for a master plan to sink up to 1km of the Fremantle rail line near City West, to spur urban revitalisation and infill living.

Leader Zak Kirkup hoped the project would be close to cost neutral, although the indication was development would proceed regardless.

The government pushed back on the opposition plan, saying sinking the line could cost $600 million, although an industry source told Business News it would probably be far less than that.

While a Liberal spokesperson said the project had support from property developers, Satterley Property Group founder Nigel Satterley told Business News it was not feasible.

“WA does have a need for increased housing diversity and to address the issue of housing affordability,” Mr Satterley said.

He said he expected a continued move towards demand for houses with backyards and away from apartments after COVID-19.

Mr Satterley said the portion of Australians preferring multi-residential builds would fall from about 30 per cent to 20 per cent in future.

That may add to demand for the greenfields developments served by rail extensions. 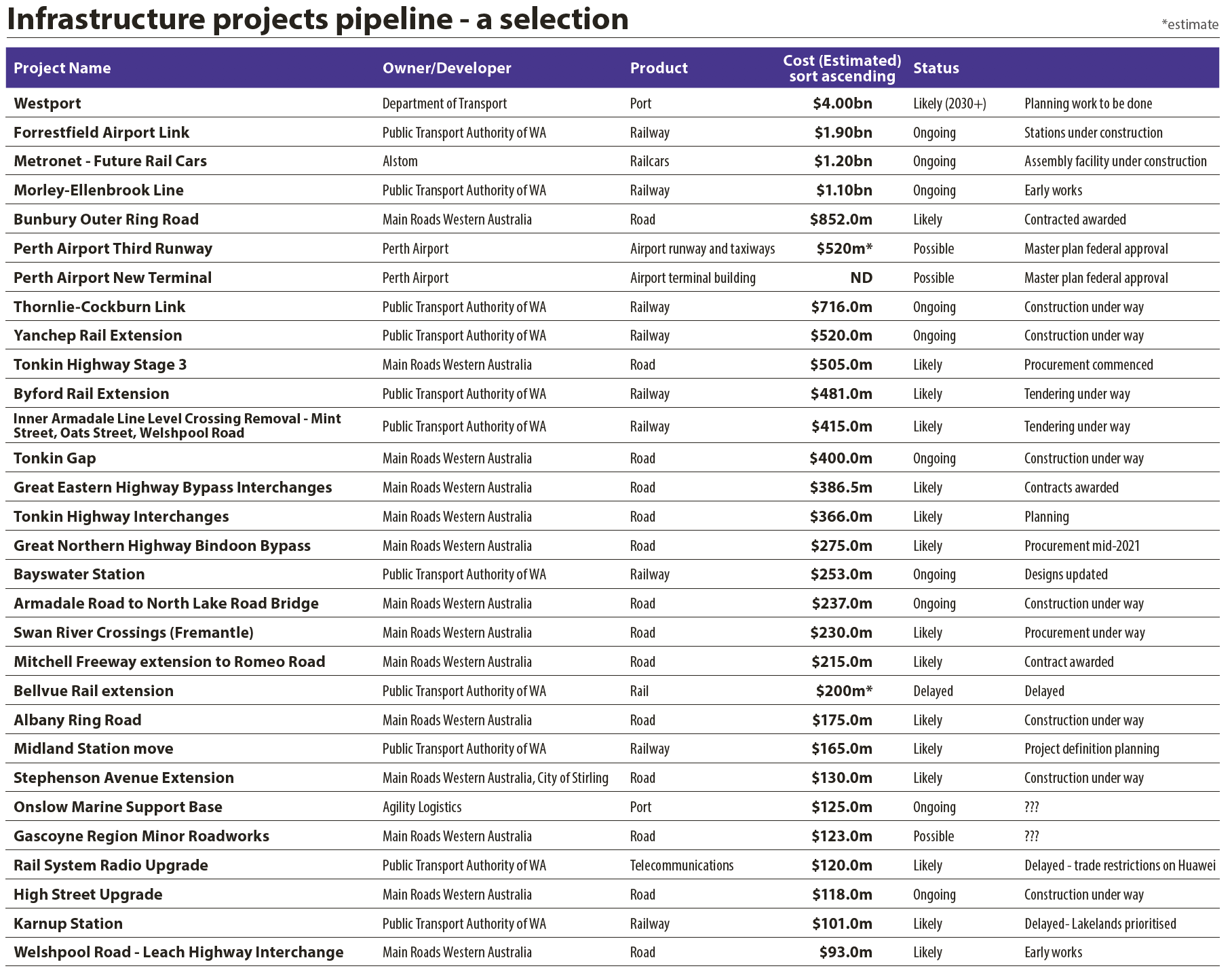 Three rail projects worth more than $1 billion combined have entered the competitive bid phase, each with two alliances aiming to win contracts this year.

In October, MELconnx Consortium, led by Laing O’Rourke, was selected to build the Morley-Ellenbrook rail line under a $753 million contract.

Meanwhile, several road projects are getting to the construction phase.

Georgiou has won work on the Mitchell Freeway extension and Tonkin Gap, with chief executive Rob Monaci praising the speed with which the government was getting projects to market.

“One of the hardest things as a contractor is pipeline slipping.

“What they say they’re going to do, they’ve done, it’s very impressive.”

Mr Monaci said there were strong opportunities available for contractors, although it was still competitive, with new entrants joining.

Beyond immediate construction, the Metronet upgrades in particular will lead to further investments.

The government has signed a $2.5 billion contract with Alstom to manufacture rail cars in Bellevue and maintain them for 30 years.

About 60 per cent of the cost will be maintenance.

Construction of the Ellenbrook and airport lines will put pressure on existing operations, with PTA documents suggesting 18 rail movements will take place every hour in peak hour between Perth and Bayswater by 2031.

Similarly, frequencies on the trunk line between Cockburn and Whitfords will carry 18 trains per hour in peak times.

Those demands have led to the government’s high-capacity signalling project, worth $1.2 billion, to improve coordination of movements.

The rail car procurement plan indicates a need to lengthen platforms on the Armadale, Fremantle and Midland lines to accommodate longer trains, which will be transitioned from service on the Joondalup to Mandurah route.

PTA will also investigate moving the terminus for the Indian Pacific rail line from East Perth to Fremantle.

The government’s Transport @ 3.5 million documents indicate the next series of priority projects could include investigation of an inner-circle rail link, with segments from Fremantle to Cockburn, Morley to Warwick, and Cannington to Forrestfield.

Bus route data obtained by Business News show the two circle bus routes, 998 and 999, had a combined 17,500 boardings on average weekdays before COVID-19, the most frequented route in Perth when combined.

Three of the 10 most popular routes link the city and inner north, two of which continue on to Curtin University and the University of Western Australia.

On that front, it is understood a long-mooted inner-city light rail will be under consideration following stage one of Metronet, although planning was paused in 2019.