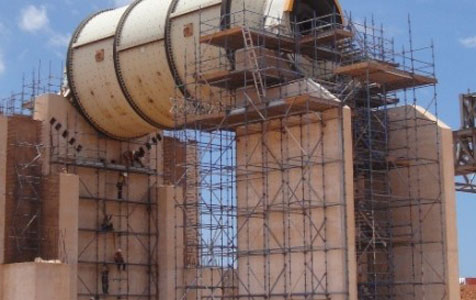 Processing facilities being built by VDM at the Sino Iron development in the Pilbara.

Shares in VDM Group have been punished on the ASX today, falling more than 47 per cent on news the contractor had been turfed off one of its major client’s mine sites, forcing it to restructure its capital raising plans.

VDM did not disclose the identity of the client or the nature of the dispute, but said it related to the status of the contract and had the potential to have a negative impact on its operating profits and short-term cash flows.

The company said its workers had been removed from the site.

The dispute forced VDM to enter a new $6.4 million funding arrangement with former CITIC Pacific chairman Dongyi Hua’s H&H Holdings, which considered the matter to be a material adverse change.

H&H had initially agreed to inject $15 million into the contractor, through a share placement priced at 2.5 cents per share.

The new arrangement will comprise a $1.4 million share placement, priced at 1 cent per share, and a convertible loan of $5 million, repayable over the next six months with an interest rate of 10 per cent per annum.

H&H also agreed to provide VDM with a further $5 million loan facility over the next 12 months.

VDM will continue with previously announced plans to appoint Dr Hua as its managing director, on a base salary of $625,000.

The convertible loan remains conditional on shareholder approval, which will be sought at a meeting to be announced within the next two months.

VDM expects the meeting to be held no later than October.