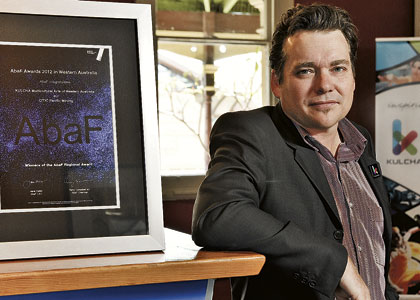 Fremantle-based KULCHA Multicultural Arts of Western Australia is on a mission to use the arts as a catalyst to make WA more culturally inclusive as skilled migration to the state grows and its cultural diversity widens.

KULCHA chief executive Jon Cope told WA Business News that embracing diversity was the aim of the game for his organisation.

Through a partnership with Citic Pacific Mining, its programs have spread to Karratha and its work was recognised last month at the Australia Business Arts Foundation awards.

“The arts is a great catalyst to connect people in a powerful way,” Mr Cope said.

“It crosses social barriers, language barriers … it leads to greater understanding, appreciation, respect and harmony, that is the ultimate goal.

In 2011 the partnership delivered various performances at the KULCHA space in Fremantle, a public ‘harmony’ concert in Northbridge and a public arts project in Karratha – the Pilbara Samba Band.

KULCHA joined with the Pilbara Multicultural Association to deliver the samba band project, which endeavoured to establish a samba band in Karratha and have it become a self-sustaining, long-term fixture in the Pilbara community.

“The issue we felt in Karratha was there are all the fly-in, fly-out workers, there is the long shift work in that environment and the transient nature of people coming for a few years and then leaving. So there is a constantly shifting community,” Mr Cope said.

“We thought if we started a large multicultural arts project – it could have been a choir but we went with the samba band project – it was a way of bringing people together for a fun and vibrant activity.

“What we are trying to do is invest skills in the community rather than just going to do a performance and leave.

“Our goal is to not be needed, ultimately just leave it (the samba band and equipment) there and empower the communities to have their own samba band.”

Mr Cope referred to the latest census data, which he said showed WA was now the most multi-cultural state in the country. Work had to be done to create a socially inclusive home for an increasingly large, skilled workforce that is migrating to Perth.

“Our focus is on the positive benefits that cultural diversity brings to our state,” Mr Cope said. “We don’t see multiculturalism as a small niche position, we see it as an all-embracing reality of our WA population.

“Whereas KULCHA might have been seen as a small arts organisation in the past, we see ourselves as an exciting solution to making Western Australia a more welcoming, socially inclusive and prosperous place.

“It would be nice to see those major corporations that are calling for a greater foreign workforce put some investment into an organisation like ours.”

KULCHA has worked in other regional areas but Mr Cope said it had previously been reactive rather than proactive when it came to delivering culturally cohesive arts programs.

The organisation has a new business plan in place to take it to the end of 2014 and part of that will be to expand its operations across WA so it is fully represented across the state.

“The business growth is going to come from external community activity, whether that is regional or in the wider metropolitan area of Perth, and that is going to be secured through greater commissions from local government and partnerships with corporate organisations,” Mr Cope said.

Part of the growth of the organisation will come from new corporate partnerships, which KULCHA is seeking, for events like its OzConcert, an SBS-broadcasted multicultural concert hosted in Perth as part of the state government’s Harmony Week.