Residents of Perth's outer suburbs are spending more than the average mortgage repayment on driving to work every week due to inadequate public transport options, a new report has found. 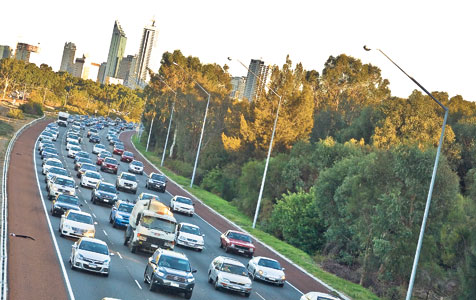 Residents of Perth's outer suburbs are spending more than the average mortgage repayment on driving to work every week due to inadequate public transport options, a new report has found.

The Committee for Perth's latest Cost of Living report reveals Perth households own more cars than ever before, despite a 67 per cent increase in fuel costs over the past decade.

Households in the local government areas of Wanneroo, Swan, Serpentine-Jarrahdale, Kalamunda, Mundaring and Armadale have 2 to 2.5 vehicles per household, with average running costs of $456 to $570 a week for a medium-sized car.

In contrast, households in the metropolitan local government areas of Perth, Subiaco, Vincent, Victoria Park, Stirling and Fremantle have 1.3 to 1.7 cars per household, with average running costs of $296 to $387 per week.

The average mortgage repayment is $500 a week.

Committee for Perth chief executive Marion Fulker said while people might be encouraged to live in outer suburbs because of cheaper property prices, they were paying a lot more in ongoing transport costs.

“The research clearly shows that the main reason people drive to work is because they don’t have the option of catching public transport," she said.

"This means that even as the cost of running a car rises and traffic congestion gets worse, unless public transport services improve, the people living in Perth’s fringe suburbs will continue driving to work.

"On the other hand, people who live closer to the city can choose to save time and money by using public transport."

Ms Fulker said there were more cars on Perth roads than people over the age of 18, with the committee estimating the number of registered vehicles at about 1.5 million.

The committee has long campaigned for greater public transport accessibility beyond the inner city as a means of reducing traffic congestion.

It wants government to implement plans to increase growth in inner and middle suburban areas that are already highly accessible by public transport, and to discourage continued growth in vehicle ownership rates.