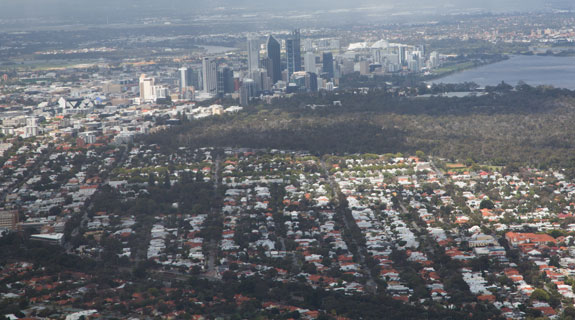 Perth's urban sprawl was the subject of a robust debate at a recent CEDA event.

An international planning expert says he believes Perth is the least dense major city in the world, an issue looming as a major constraint to the financial feasibility of developing new public transport solutions.

The head of Canada’s Queen’s University school of urban and regional planning, David Gordon, said his research was based on a comparison of Perth suburbs with Canadian counterparts in major cities. “I don’t think there is a single neighbourhood in Perth that can support a bus, let alone heavy rail in terms of density and people per gross hectare,” Professor Gordon, pictured right, told a Committee for Economic Development of Australia event yesterday. (Photo: Energy Images)

“Perth is the lowest density major city I’ve ever seen.”

Professor Gordon said the wave of multi-residential projects sweeping Perth was a solid start in arresting the urban sprawl that had defined Perth for decades, but urged the community to be more accepting of high and medium-density projects in the suburbs.

“This is the thing that’s been confusing us in Canada too,” he said.

“There are 140 cranes in downtown Toronto right now and there are more high-rise buildings under construction there than in the next five North American cities.

“Yet, five times as much is happening on the greenfields edge.

“Every one of those towers downtown has been a fight, it’s been in the newspapers, there’s been a political approvals process ... we think we’re building a lot downtown.

“But we analyse it and we’re building five to 10 times as much when you go around the outside edge, and we’re also seeing that in Perth.”

However, Professor Gordon’s claims regarding Perth’s density and where it sits on an international stage were challenged by Curtin University professor of sustainability Peter Newman, who was in the audience at the CEDA lunch.

Professor Newman said Perth was about double the density of Atlanta and Phoenix, and was even higher than Brisbane and Canberra.

However, he said efforts to increase the density of Perth were hampered by local government height restrictions across many suburbs.

Many of those local government authorities are missing the mark on urban infill targets stated first in the state planning framework Directions 2031, and again in the new guidelines, Perth and Peel @ 3.5 million.

Business News reported earlier this year that 16 local government authorities, half of the 32 across metropolitan Perth, were still in the early planning phase of meeting infill requirements.

“We have had high-rise development in the city of Perth, but there is almost nowhere else,” Professor Newman said.

“Where else is that going to happen? Where else are we actually saying you can get above five storeys?”

Planning Institute of Australia WA president Charles Johnson said the wave of apartment developments proposed for South Perth was an example of high-rise projects being facilitated outside of the CBD, but acknowledged the list of opportunities were few and far between.

“You’ve seen the struggle where the state had to intervene to get a decent density development around the Pavilion markets in Subiaco because of their height limits,” Mr Johnson said.

“But it is possible and it’s one of our biggest opportunities and where we need to get the amenity right is around some of those transit areas in the south-east corridor … and the north-east corridor.

“If we can get amenity and work with state and local governments around some of those sites we can increase the density because that’s using the infrastructure which we already have, which is a main railway line.”

Hassell principal Chris Melsom said there needed to be a set criteria developed to identify the areas where increased density would be most suitable.

The other issue, according to LandCorp chief executive Frank Marra, was the stigma attached to high-density development in the suburbs, and community acceptance of medium and high-rise buildings.

Mr Marra said it was important that government and developers sold the benefits of increased density across Perth.

“There are enormous lifestyle benefits, but I also think we need to go a bit further than that and make sure that we’ve got really good examples.

“With medium and high-density development, the community really latches on to poor outcomes that might have occurred in the past.