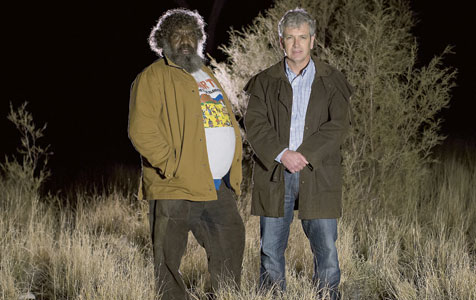 NEW TRADITION: Brian Reilly (right) with Martu leader Brian Samson, one of the traditional owners of the land on which Cameco’s Kintyre uranium deposit is located. Photo: Cameco

Western Australia’s uranium explorers are in somewhat of a holding pattern as they wait for a significant lift in prices for the controversial commodity.

That’s not to say they are sitting on their hands, however.

The state’s two major uranium companies, Toro Energy and Cameco, are working on construction and finance arrangements so they can move quickly when uranium prices reach closer to $65 per pound.

With a capital cost of $269 million, Toro Energy’s Wiluna project has secured environmental approval but has yet to find a strategic partner to further the development.

The partner would provide equity in exchange for a long-term off-take agreement, and then either secure debt finance or raise capital to develop the project.

Canada-based Cameco which has uranium mines in Canada, the US, and Kazakhstan has pushed back its timeline to develop its two advanced exploration projects: Kintyre, for which it paid Rio Tinto $US495 million in 2008; and Yeelirrie, for which it paid BHP Billiton $US452 million last year.

Predictions about when the price of uranium will return to a $70/lb spot price held before the Fukushima nuclear power plant disaster vary, with analysts anticipating a bounce from the current $35/lb between 2015-2020.

Another WA explorer with its eyes on the long-term prize is newcomer Energy and Minerals Australia, which is using the current hiatus in development activity to pursue environmental approval.

EMA, which appointed former head of government relations at Fortescue Metals Group, Julian Tapp, as chief executive officer earlier this year, along with former BC Iron managing director Mike Young as chairman, has just submitted its Mulga Rock project to the Environmental Protection Authority for assessment.

Mr Tapp said EMA had a timeline to have all approvals by mid 2015 so it could make investment decisions and start production before the end of 2016.

This timeline is similar to that of Toro Energy, which plans to seek financing for its Wiluna project, including the recently acquired Lake Maitland tenement, mid next year and start producing uranium in the fourth quarter of 2016.

“The new incentive price that the analysts put out there is about $70 per pound. We believe with Lake Maitland built into Wiluna this project now has robust economics at about $65/lb,” she said.

Dr Guthrie said while Wiluna as a standalone project was projected to produce uranium at a cost of $37/lb, adding Lake Maitland brought the production price to the low $30s.

Cameco Australian managing director Brian Reilly said market conditions meant it had pulled back on its global strategy of producing 40 million pounds of uranium by 2018 and was now looking to produce 36 million pounds.

“This has an impact on Kintyre and Yeelirrie. We’ve made some decisions to get the projects ready as opposed to bring them into production today because the market simply doesn’t dictate that increased uranium demand today,” Mr Reilly told Business News.

Meanwhile, Thundelarra chief executive Tony Lofthouse, who recently led the company in a $4.5 million cost savings project, said Thundelarra had moved away from direct interests in uranium exploration because it believed they were less likely to deliver share price growth.

“It’s really clear that no matter what you produce in the uranium space at the moment, the market just puts its hand over its mouth, gives polite yawns and moves on,” Mr Lofthouse said.

A spokesperson for the Australian Uranium Association said the long-term outlook for the industry was positive, as nuclear power would continue to expand, particularly in China.

“We expect demand for uranium to exceed supply towards the end of this decade and these imbalances will kick-start a recovery of the uranium price and incentivise new mine developments,” the spokesperson said.