THE controversy over lead exports from Esperance may have attracted intense public focus over the past two years, but a potentially larger commercial issue that remains unresolved is the future of bulk nickel concentrate exports. 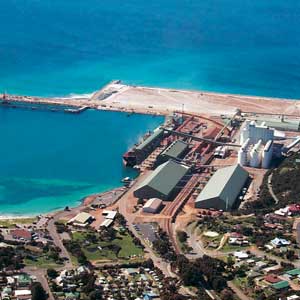 THE controversy over lead exports from Esperance may have attracted intense public focus over the past two years, but a potentially larger commercial issue that remains unresolved is the future of bulk nickel concentrate exports.

The state government and industry are locked in negotiations over a port upgrade and who will pay for it, after the Esperance Port Authority decided to ban the handling of nickel concentrate exports from the start of 2009, unless the material is bagged or in containers.

Nickel exporters BHP Billiton and Norilsk Nickel, and producers Xstrata and Panoramic Resources, which have off-take agreements with BHP, are the companies most affected.

A port upgrade, which the port authority estimates would cost around $100 million, would enable it to handle the concentrate in compliance with guidelines handed down by the Department of Health and the Department of Environment and Conservation.

Premier Colin Barnett said in a statement last week that one of the challenges at Esperance was to upgrade the port facilities so other minerals could be safely transported.

Mr Barnett said the government was working with industry to assess and plan for the port's future.

As speculation over who will pay for the upgrade grows, Esperance Port Authority chairman Jim Matijasevich said the nickel ban was made reluctantly.

It arose because of the stringent conditions imposed on the port in relation to dust and odour emission, and because of the unsustainable cost of upgrading the existing concentrate circuit or building a new one to meet those conditions.

"Our issues are to follow the rules and make sure that our workforce and the community of Esperance are protected, and making sure we don't exceed the guidelines that are presented to us," Mr Matijasevich told WA Business News.

"We wanted to make the nickel line such that it would reach standards that were world's best practice, and when we did the numbers the amount of money required to do it was well over $100 million.

"That investment is something we can't afford, so that kind of investment would have to come from somewhere else."

In a statement, he said: "None of the options considered guaranteed that dust and odour standards required will be met, and the cost is beyond the point of diminishing returns and, therefore, is not sustainable."

Esperance is the only port in Western Australia south of Port Hedland licensed to export bulk nickel concentrate, which it has done since 1972.

This development comes on top of pubic health issues in the Esperance community after lead contaminations in the area in 2007.

Mr Matijasevich agreed that, after the problems of 2007, safety to the community and port workers is the major priority, with clear cooperation with the DOH and DEC integral to an outcome on the issue.

"We have to try and facilitate trade but were not facilitating trade at the expense of health and all we can do is follow the guidelines," he said.

The nickel industry employs around 20,000 people across the state and is worth more than $5 billion in exports for WA. Only a portion of this is exported as concentrate.

It exports nickel concentrate via Esperance, sourced from concentrators at Mt Keith, Leinster and Kambalda in the Goldfields region.

BHP also exports a mixed nickel cobalt product via Esperance, from its new Ravensthorpe mine. This product is transported in purpose-built sealed containers.