Curtin University has secured a development partner for $300 million worth of works at its Bentley campus, which will include 1,000 new student accommodation beds, a 60-room boutique hotel and 3,000 square metres of commercial space. 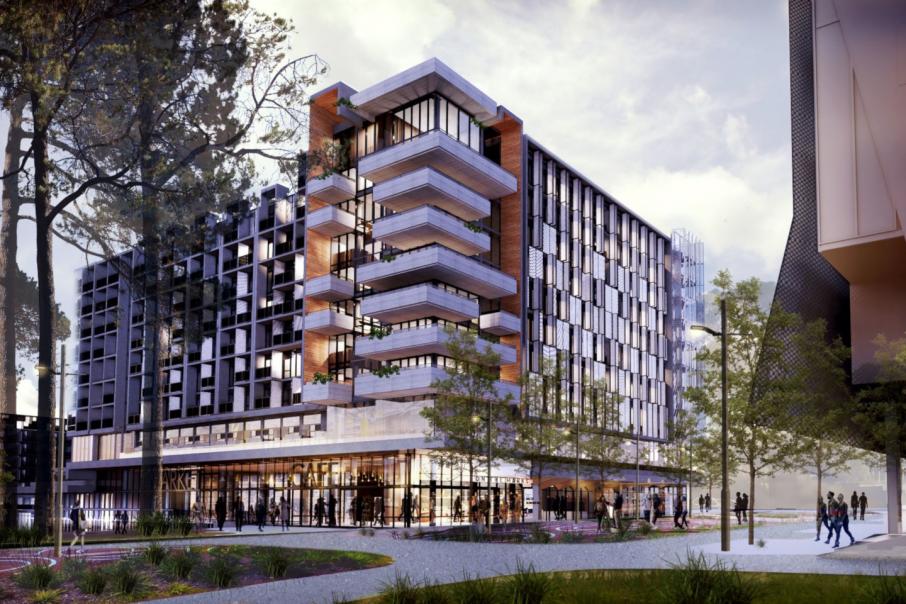 Curtin University has secured a development partner for $300 million worth of works at its Bentley campus, which will include 1,000 new student accommodation beds, a 60-room boutique hotel and 3,000 square metres of commercial space.

Curtin announced it had entered a 35-year partnership with a consortium led by global investment manager InfraRed Capital Partners to design, finance and construct the new developments, which will be known as Exchange.

Other partners in the consortium include St Catherine’s College, which will manage the student rooms, and Waldorf Australia Group, which will operate the hotel.

Development will also include 38 apartments and 15 retail tenancies, including a grocery store and food and beverage outlets, and is the first phase of the university’s Greater Curtin plan to enhance the amenity and research capability of the Bentley campus.

Curtin University vice-chancellor Deborah Terry said construction contractor Probuild would carry out the works, with building slated to begin in August and the first stage expected to be completed by early 2022.

“Exchange has been designed to transform Curtin’s main Perth campus into a major innovation hub where research, industry and the wider community will be able to come together to drive real-world solutions to tomorrow’s challenges in one convenient location, so I am absolutely delighted that this important milestone has been achieved,” Professor Terry said.

WA Premier Mark McGowan congratulated the university for advancing its plans to deliver the first phases of its Greater Curtin initiative.

“This new precinct will be integral in encouraging more international students to come and study at Curtin University,” Mr McGowan said.

“My government looks forward to continuing to work with the education sector on important projects, such as the new innovation hub, to encourage more international students to WEstern Australia, create local jobs and diversify the economy.

The project is the sixth investment by InfraRed Capital Partners in Australia and New Zealand, adding to more than than $US12 billion in equity capital under management worldwide.

InfraRed Capital Partners chief executive Werner von Guinneau said the group was delighted to have the opportunity to partner with Curtin on the Exchange precinct.

“The project incorporates various sustainable initiatives and alternative energy generation sources to ensure long-term sustainability and reduce the overall impact of the development on the environment,” Mr von Guinneau said.

“Our involvement in this project is a further example of InfraRed’s commitment to sustainable infrastructure.”

The Exchange precinct follows Curtin’s announcement earlier this year that Lendlease had won a $110 million contract to deliver the university’s new school of design and built environment.

Designed by John Wardle Architects, the school of design and built environment will incorporate 2,500sqm of integrated industry spaces, available for lease by commercial tenants.

Curtin is also developing a battery industry research initiative at its Bentley campus, securing $25 million in federal funding in April, in addition to a $28 million commitment from the state government and the university’s research partners.

The university is working with 58 industry, government and research partners to establish the Future Battery Industries Cooperative Research Centre.