SPECIAL REPORT: The number of international students coming to Perth has grown strongly over the past four years, but WA is still underperforming, particularly in the university sector. 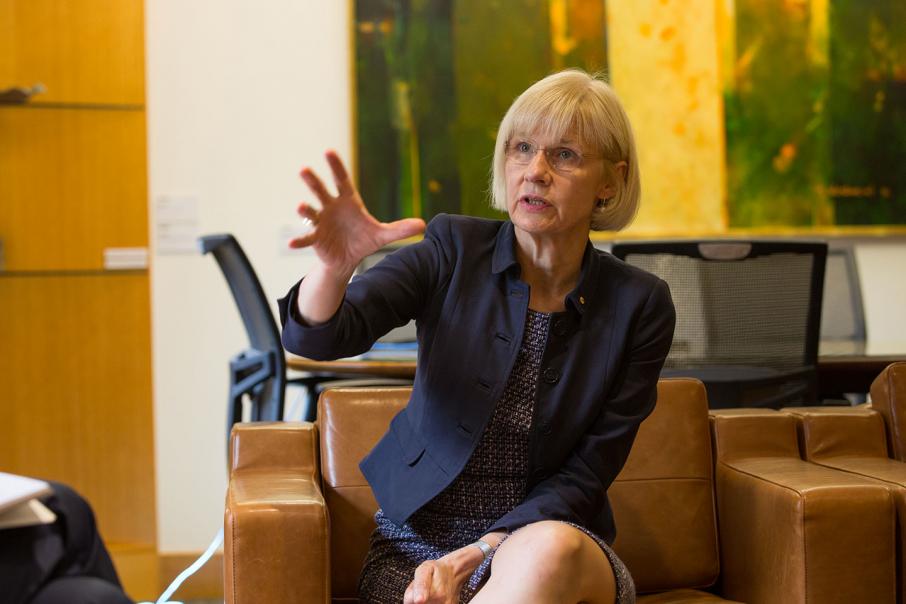 The value of international education is unquestioned.

Export income attributed to onshore international students was valued at $18.8 billion in 2015, making it the country’s third largest export.

The higher education sector accounted for more than a third of the total, with vocational education and training (VET) and English language courses also making large contributions (see graphic).

However, there is a worrying long-term trend for WA – its share of international onshore students has fallen from 9.9 per cent in 2002 to 7.8 per cent in 2016.

The higher education sector has experienced an even larger fall, from 11.2 per cent to 6.6 per cent.

This is particularly concerning because higher education students make by far the largest economic contribution, courtesy of higher tuition fees and the longer duration of their studies.

Another market segment where WA underperforms is school education.

Only 900 international students are enrolled at WA schools, just 3.9 per cent of the national total.

That is understandable, as until recently there was little capacity in WA’s crowded schools to take extra students from overseas. However, a consequence of that is a limit on one the main pathways for students into higher education. 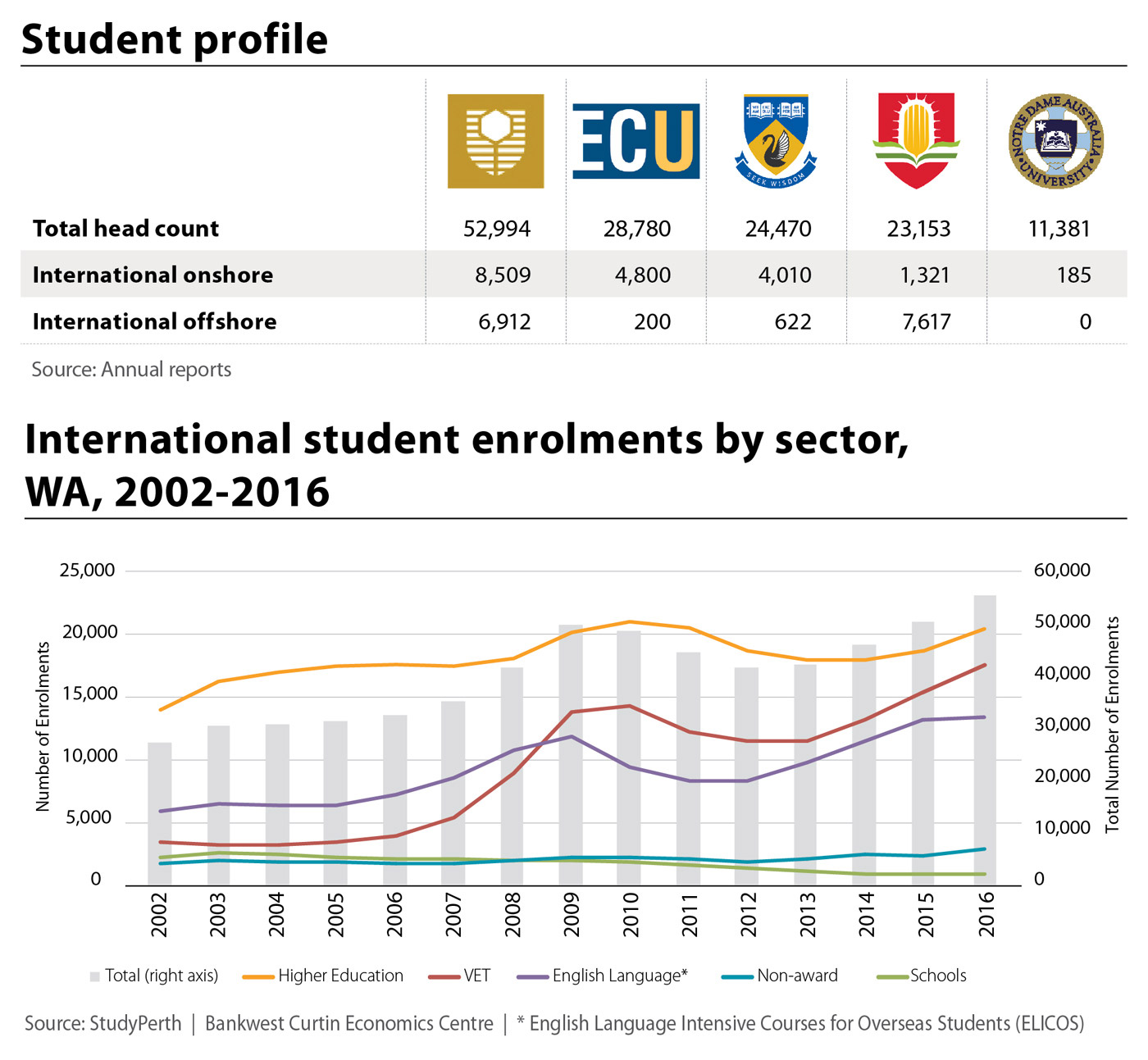 One reason for WA’s poor performance over the past decade is the lack of investment in marketing and promotion.

The state government will provide just $1.3 million this year to StudyPerth, which has only two education officers posted overseas.

By contrast, Queensland is planning to spend $34 million over the next five years, and will have 15 education officers at its overseas posts.

That’s not counting the extra money from universities and city councils in other states.

The John Curtin Institute report said Perth should be able to exploit its proximity to key Asian markets.

However, a study completed last month by the Committee for Perth questioned this conclusion.

“For example, cities in the eastern states attract more students from countries such as Indonesia and China despite WA’s geographic proximity to these countries,” the report found.

The challenges facing Perth were highlighted by the 2017 QS Best Student Cities survey, in which the city slumped 15 places to 50th on the international ranking, below every other major Australian city, including Canberra and Adelaide.

However, Perth ranked lower on student experience (48th), which is based on the perception of students who have studied here.

Perth ranked even lower in the employer activity category (67th), which is based on a survey of international and domestic employers who identified at least one institution in Perth as producing excellent graduates.

QS suggested this ranking was the downside of Perth’s isolation, saying it may reflect the sheer distance separating the city from many of Australia’s graduate recruiters.

The Committee for Perth report reached a similar conclusion.

“It is evident from national and international assessments that the state is not perceived to provide the quantity or quality of post-graduate employment opportunities available in other major metropolitan regions in Australia,” it said.

In the QS analysis, Perth also suffered from a low affordability ranking (106th), which is based on tuition fees and three cost-of-living indices, including CommSec’s iPad index and the Mercer cost of living rankings. 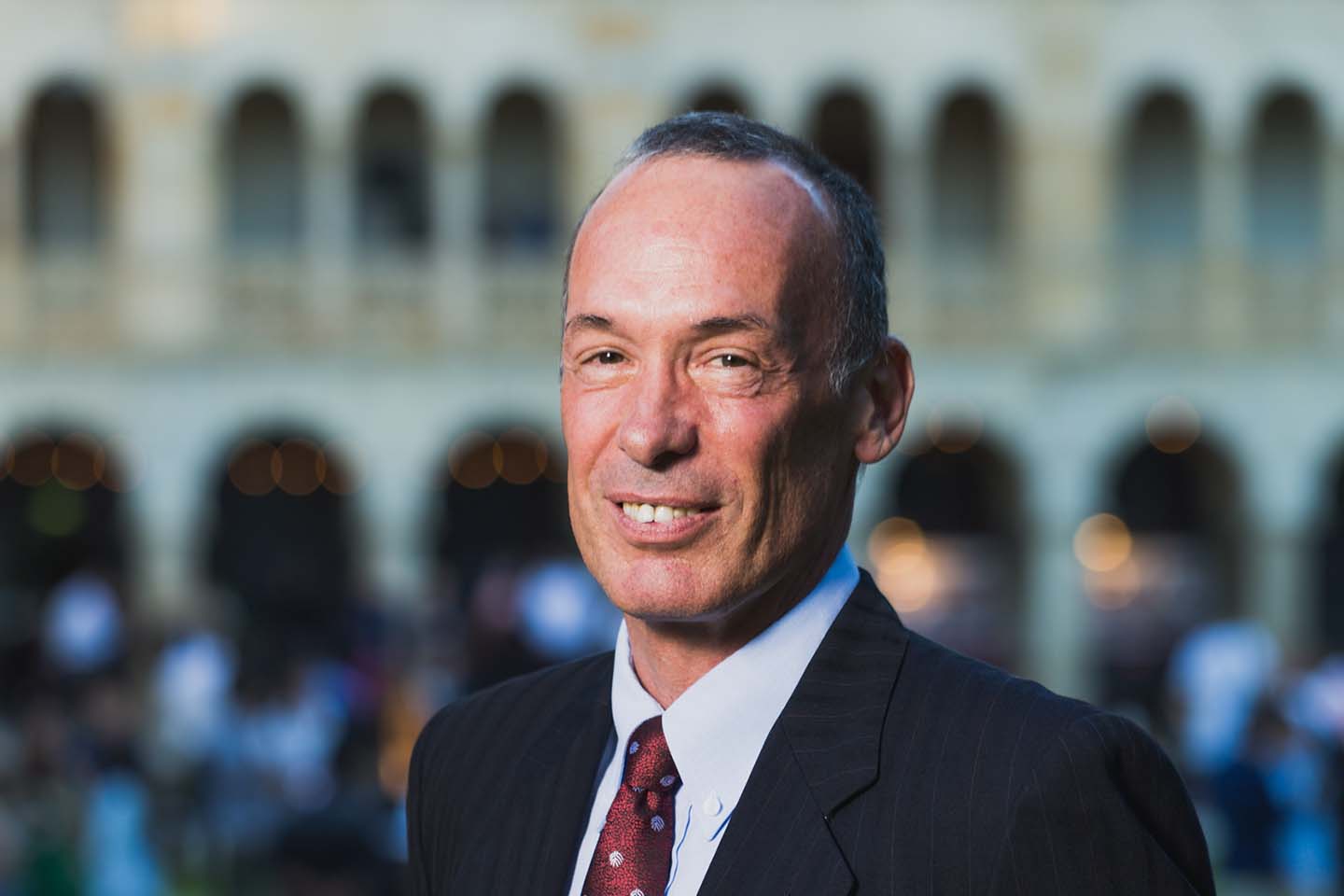 University of Western Australia pro vice-chancellor (international) Iain Watt said one of Perth’s drawbacks was that it was the only major city in Australia without a university campus in the CBD.

“You need a critical mass of students in the city, to make it attractive to other international students,” he said.

Curtin University vice-chancellor Deborah Terry said an added problem in Perth was the lack of accommodation options for students.

“Cities that are known as great student cities have a lot of good student accommodation,” she said.

This problem is starting to be addressed, with three projects targeting international students in the planning stages in Northbridge.

Devwest Group and Stirling Capital are planning developments on Stirling Street, while Brisbane-based Cedar Pacific is planning to develop a site behind Perth Arena.

Collectively they will deliver 1,600 beds to the market.

Most notably, Curtin has short-listed several proponents to develop 1,500 units on a staged basis.

“We want a diversity of student accommodation, from colleges to independent living for post-graduate students,” Professor Terry said.

Once completed, the new development would more than double the 1,175 beds on Curtin’s Bentley campus.

Against that backdrop, Perth’s public universities are all focused on substantially lifting the number of international students.

UWA has achieved significant growth in the number of international students over the past couple of years, but wants a lot more.

“We want to be at least 10,000 by 2023, which means we will have tripled the number of international students on campus over eight years,” Professor Watt said.

That would bring UWA more into line with other Group of Eight universities, which all draw at least 30 per cent of their students from overseas.

In contrast to UWA’s focus on recruiting onshore students, Curtin is aiming for growth both onshore and offshore.

“You need both,” Professor Terry said.

“We’re committed to being a global university with a network of highly connected campuses.”

Its next step will be the opening of a campus in Dubai, which will offer degree programs from January 2018.

That will be additional to its campus in Sarawak, with about 4,000 students, and a smaller campus in Singapore.

“It means we can raise our profile internationally, we can recruit students in regions that may not have the capacity to come to Perth for their whole degree,” Professor Terry said.

She said many students at Sarawak spent two years there and came to Bentley to complete their degree.

In addition to its overseas campuses, Curtin offers courses in collaboration with partners in countries such as China, Mauritius, Vietnam and Sri Lanka.

Edith Cowan University is heading down a similar path.

Vice-chancellor Steve Chapman said ECU had an ambitious strategy to grow international student numbers, both in Australia and through teaching programs offshore.

“We have also set a target to establish at least one international campus by 2021, focusing on programs in our strongest disciplines, such as education, health and the performing arts,” he said.

ECU’s overall aim is for 25 per cent of all students to be international by 2021 – up from about 17 per cent currently.

Murdoch University’s focus is primarily on offshore enrolments, with nearly 7,000 students in Singapore enrolled in Murdoch courses and a small number in Dubai.

The Committee for Perth report said the offshore focus of most of the WA universities meant they had a different student profile to their interstate peers.

“What is most striking about the profile of overseas students enrolled in WA institutions is that only 50 per cent study onshore,” its report found.

The desire to increase international student enrolments is underpinned by money, as they typically pay full fees, but the universities emphasise there is more to it.

“It’s ensuring out students are educated in a diverse student body, because all of them will be going out to a global workforce.”

“We want more and more of our students spending time overseas as part of their degree programs,” Professor Terry said.

“It also enriches the learning experience for local students through our study abroad schemes, foreign language programs and the ability make connections and learn from peers from around the world,” he said.

Professor Terry said a partnership Curtin had launched with the University of Aberdeen added a new dimension to its international strategy.

She said many universities had research and teaching partnership, but the aim was to have a deeper relationship with Aberdeen.

It includes a jointly taught masters degree in subsea engineering, and a joint international centre in energy research.

“We would see major student and staff mobility and the capacity for Aberdeen and Curtin to work together transnationally,” Professor Terry told Business News.

“In time, we would hope some joint courses would be offered through Dubai and we might do the same with Aberdeen through one of their campuses.”

Professor Terry said the partnership came out of common ground in oil and gas and engineering, but had expanded quickly.

“We have found there is strong compatibility around regional health delivery and we’ve found quite a lot of commonality around humanities, particularly creative writing, and business we well,” she said.

Professor Watt said a big focus area for UWA was building relationships with overseas universities, initially in China and later in other target markets such as India, Malaysia and Sri Lanka

He said this gave UWA more control over student quality, compared with recruiting through retail agents in other countries.

“We want the students to have a high-quality academic background.”

He said UWA also focused on students with strong English language skills, not just those that had passed a test.

The ideal result was that international students outperform domestic students.

“That’s where we want to be; we want to attract students who are going to lift the academic standards of the university,” Professor Watt said.