The union movement has overreached while federal Labor has been in power, and legislative change may be needed to ensure they become accountable to their members, and the nation. 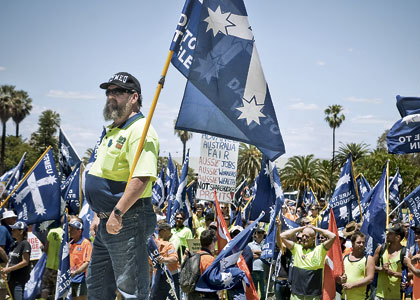 THE CAUSE: Flags have been raised across the nation - red flags - about union activity following allegations of mismanagement and undue influence. Photo: Grant Currall

The union movement has overreached while federal Labor has been in power, and legislative change may be needed to ensure they become accountable to their members, and the nation.

YOU don’t have to be a scholar of history to know that the fear of impending defeat causes the most extreme reactions among those who are about to lose.

Some of those who know they are about to lose seek to destroy evidence; others take a scorched-earth approach in the hope of leaving few spoils to the victors, including those who opposed them internally.

In some cases, these two actions are one in the same.

Clearly the most extreme examples of such actions were in wartime; but war is not the only time such events occur.

While it might be drawing a long bow to compare the last gasps of the federal Labor government with the kind of rampage that occurs when occupiers are driven from foreign lands, there is growing view that a spate of recent legislative and regulatory activity emanating from Canberra is a long way from governing and much closer to wanton destruction.

Be it efforts to curb the successful 457 laws, entrench penalty rates or muzzle the print media with a government-appointed regulator, the last few weeks of the Gillard government have the appearance of economic vandalism that will make it the harder for its opponents when they inevitably takeover.

Of course, it is not just the parliamentary Labor Party involved in this. Many of the new moves are aimed at strengthening the hand of its union backers.

And like the losers of the past, scorched earth is not the only thing that’s taking place.

You can be sure many union officials are preparing to cover their tracks as the prospect of a Liberal victory becomes more and more certain.

The union movement has reason to fear a change of government. It has bankrolled Labor and, as a result, provided it with ideological direction – with far more potency than any corporate backer could receive from the conservatives.

In the past few decades, conservative governments have tended to see unions as a decaying power. Apart from the construction sector watchdog, the Howard government let the union movement wane naturally until the WorkChoices legislation. That awoke the union movement from its slumber.

Only about 20 per cent of the workforce is in a union, and that number would have kept falling but for the most extreme elements of WorkChoices, which gave it a new constituency.

The election to defeat Mr Howard was a do-or-die effort for the union movement. They risked all, financially, because they could not afford the irrelevancy that would come with another term of Liberal rule. But the cost of that fight meant they required the spoils of victory; with the end of WorkChoices they pushed the country backwards via Labor’s Fair Work legislation.

They could not stop themselves there, however. They have now started overtly interfering in many other areas, such as this nation’s very successful immigration strategy, holding good policy to ransom over the needs of the lowest common denominator, which, in my experience, has always been the most entitled member of any union.

Arguably, this is no different to how it has been in Labor governments of the past; it is only the degree that has changed. Former governments led by Bob Hawke and Paul Keating had pacts with various members of industry and other elites, which allowed them to water down the influence of the union movement.

Perhaps unions of the past felt less threatened with extinction and, therefore, were more ready to act in the national interest.

By comparison, the union movement today is this Labor government’s only friend. Under such circumstances, when a minority group virtually runs the government, it appears it has lost the ability to distinguish between its interests and those of the nation.

However, it is not an ideological error, or even one of vanity, for which it will be likely to pay a price.

In overplaying its hand it has attracted more attention to itself and its inner workings than ever before. Craig Thompson’s alleged mismanagement of a branch of the Health Services Union and the unusual circumstances of Prime Minister Julia Gillard’s involvement with the Australian Workers Union two decades ago have created a stench that cannot be removed by the fresh breeze of new government.

Tony Abbott is planning, quite rightly, to enact laws to make unions more accountable to their members and the public, in a way that is no different to public companies. He also should investigate any allegations of mismanagement, corruption or criminal activity which simply cannot be allowed to take place in organisations that claim to represent people, take their money (often in circumstances that could hardly be called voluntarily), provide the bulk of politicians for Labor and pull the strings of a Labor government. It is simply intolerable.

If a handful of corporates had this kind of power over a Liberal government we would never hear the end of it.

So will the virtual fireplaces be burning furiously and the shredding machines running hot? I reckon so, although it is clear that cleaning up afterwards is not something wrongdoers in the union movement leave to the last minute.

I was stunned to hear that relevant records of the AWU’s Western Australian branch had disappeared from their storage place in the Office of State Records. Unfortunate coincidence or did someone, somewhere arrange for that to happen?

We may never know, but a broad-based inquiry into union management practices would help us understand if these high-profile cases were isolated incidents or, as I suspect, more like the tip of an iceberg.

Such an inquiry would be welcomed by many who have become suspicious of how such powerful organisations operate without the kind accountability we take for granted in other parts of community.

The only fear I have is that the corrupt and the inept have most of this year to cover up their tracks.