Competition is deemed healthy for most of us, so why not in the labour movement? 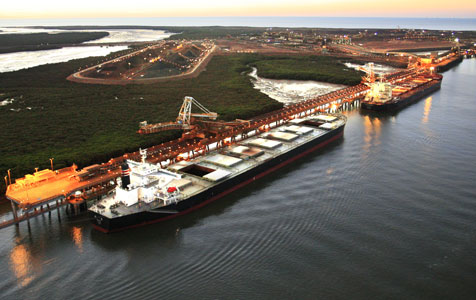 MONEY MATTER: A pay dispute at Port Hedland has the potential to cost the export hub $100 million a day.

Competition is deemed healthy for most of us, so why not in the labour movement?

Workers at Port Hedland threaten to bring one of the country’s most critical income-earning operations to a grinding halt, costing around $100 million a day.

I have little faith that those who work in many of these key bottlenecks in our national infrastructure are free to voice their own opinions. Rather, union leaders hijack the situation (and effectively the workers involved) to build their status within the union.

That is not to say that the democratic process within unions isn’t important; but workers don’t really have a choice – in many sectors you are either in the system going along with the nonsense or outside of it, often made a pariah as a result of the latter.

That is because there is no choice.

And union leaders have little to lose. Their personal stake is advancement through the union and then, on to a parliamentary career for the most able and sellable, on some cosy appointment if their preferred party is in power.

You only have to see the Fair Work Commission decisions to see how unrealistic the Port Hedland workers’ claims are – including a nearly 12 per cent pay rise for deck hands who known to be among the most handsomely rewarded workers for their skills base.

The enterprise bargaining agreement approved in September 2010 and found on FWC’s website indicates that, general purpose hands’ annual base pay rose nearly 28 per cent in the three years following from $107,328 to $137,144. Extraordinary, when you consider they work four weeks on, four weeks off.

Here’s the view of Teekay Shipping’s lawyers presented in a FWA hearing this March.

“Our client does not consider that the Maritime Union of Australia (MUA) is genuinely trying to reach an agreement in circumstances where it has made and maintains a demand that any agreement with Teekay has to include at least an 11.9 per cent increase of the base rates, by reference to a so called relativity argument, without any justification by reference to work value changes by its members,” the lawyers wrote.

“This demand is on top [of] a range of other demands by the MUA.

“This demand is so unrealistic that it is frustrating the bargaining and demonstrates that the MUA is not genuinely trying to reach an agreement.”

Nevertheless, the MUA won the argument that it was genuinely trying to reach agreement with the employer.

I am also told that one of their key additional demands is more holidays – something they traded off for more pay sometime in the past. Now they want it back when they already only work half the year.

Each industry across Australia has been carved up among the union movement, such that we have a series of monopolies that would not be tolerated if it were on the employer side of the equation or in another commercial realm.

Many who represent consumers or suppliers rail against the supermarket sector, dominated by two large players, or our banks, where four companies represent almost the entire industry. Yet we rarely hear complaints about the choice that is offered to workers, or the behaviour encountered by employers who know there is no alternative to the union heavy who is threatening their business.

There is no doubt that, in the history of the labour movement and most Western democracies, collectivism among workers allowed them to strengthen their hand and win wages and conditions that improved not just their lives, but society as a whole.

The union movement has become too powerful and, whether it wants to believe it or not, it has invited corruption. We are going to see a lot of it via the royal commission that has just started.

However much of that bad behaviour – the wasteful spending of workers’ money and wasteful energy put into political gain for individual leaders – would not be possible if unions faced competition and workers were allowed a choice in who represented them.

Certainly some unions may, in the short-term, use militancy as their competitive edge to drive better bargains for workers, just as some companies abuse the law or other due process to gain market share. The difference is that consumers have a choice when they recognise bad practices.

Smaller unions, sometimes just representing a portion of workers at one company, may not have the industrial might of the unions we have to live with today, but they will be far more flexible and nimble than the monolithic structures that currently dominate.

These big unions have a short-term view, often more aimed at points scoring against enemies in Canberra than looking after the long-term interests of their members.

Worse, they exploit on the weakest point of employer side of the equation; often doing deals with the greediest or most desperate business owners and managers to thwart challenges from non-union workers, business or sub-contractors.

History has shown that many in the management class will corruptly come to arrangements with bullying unions for personal gain, to avoid confrontation, to keep the job moving or to create barriers to entry for potential rivals.

Beyond exposing this corruption by way of a royal commission, something needs to be done to ensure the union movement’s monopolistic structure is ended and workers are allowed a choice in what is essentially a service provided to them, and an important one for them and the nation as a whole.

Bring on competition, I say.