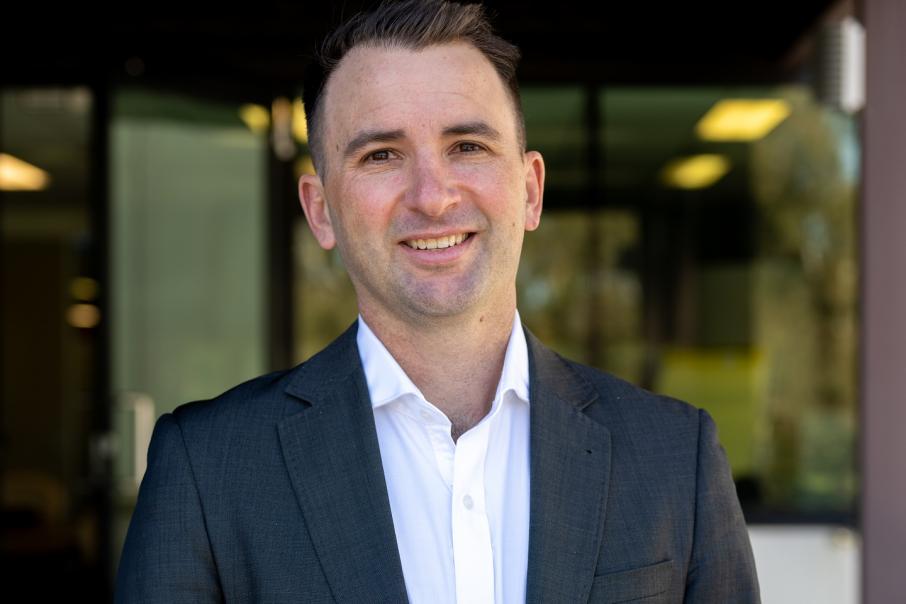 Michael McGowan says HIA’s membership base has grown during the past two years. Photo: David Henry

Leading the state’s peak housing body was the last thing on Michael McGowan’s mind as he carried his children to safety from the flames and smoke that filled his family home.

However, the fire at his East Victoria Park home sparked a series of events that led to his current role as Housing Industry Association WA executive director.

Early on a January morning in 2019, an exhaust fan malfunction in the bathroom dropped flames onto the sink, with the heat shattering glass on the mirror and shower and filling the house with smoke.

Mr McGowan and his wife grabbed their children, then aged three and six, and called the fire brigade.

Within 30 minutes the fire was extinguished.

The following day, Mr McGowan was due to meet with HIA’s John Dastlik to talk about a commercial manager role at the housing group.

“I had to go and buy a new polo shirt as all of my clothes smelled like smoke,” Mr McGowan told Business News.

The damage from the fire was enough to prompt Mr McGowan and his family to demolish and rebuild on their property.

It was through this rebuild that the then Chamber of Commerce and Industry WA member experience manager became fascinated with the nuances of homebuilding.

Mr McGowan started with HIA as a commercial manager in April 2019, about two months after he started planning to build a new home.

“I was really fascinated by the [building] process from a consumers’ point of view,” he said.

“To marry that with the advocacy side of things and be able to make a difference in a particular industry was what really cemented my interest in HIA.”

He stepped into the role in late May, following Cath Hart’s departure to head up the Real Estate Institute of WA. Prior to this, Mr McGowan spent almost two years as HIA’s deputy executive director.

His appointment as executive director was announced at an HIA lunch in Perth, at which keynote speaker (HIA national chief economist) Tim Reardon explained why WA’s construction market was hit hardest by inflationary pressures.

Mr Reardon told the event construction costs in WA rose by 30 per cent in the 18 months to March 2022, while in Victoria and NSW they rose by 16 per cent and 24 per cent, respectively.

He also spoke about the chasm between the volume of home build starts and completions, as a lack of labour made it increasingly difficult to keep up with demand.

“There is an enormous volume of work that has come into the pipeline and the industry [is] having a very challenging time digesting that,” Mr Reardon said.

The growth in demand for new housing was prompted by federal and state government stimulus brought in at the start at COVID.

Mr McGowan said the scenario, often referred to as ‘the snake that ate the wombat’ put immense pressure on housing supply.

He said the delivery of the housing stock to the market from the current volumes should provide temporary relief over the next 12 months.

“That said, WA must continue to deliver 20,000 home builds per year to keep up with the demand on housing, maintain a stable trade workforce and avoid the issues associated with the surge of building that has occurred over the last two years,” Mr McGowan said.

Many builders closed their books to new sales during the pandemic as workforces, hollowed out in the years leading up to COVID, grappled with soaring demand.

“The work on the ground at the moment is the equivalent of what we saw during the peak of 2015 and 2016, even though sales are 30 per cent less than what they were during those times,” Mr McGowan said.

“We’re just not able to get that volume of work through the pipeline as quickly as we were during that time.”

“Had we been in a position in 2017 or 2018 where we pulled a few more levers and maintained a steady workforce … we maybe wouldn’t have had to pull the lever as hard as we did through that [COVID] period,” he said.

“It would have meant that our trade base would have been higher than it was when we were only building that low level of houses.” 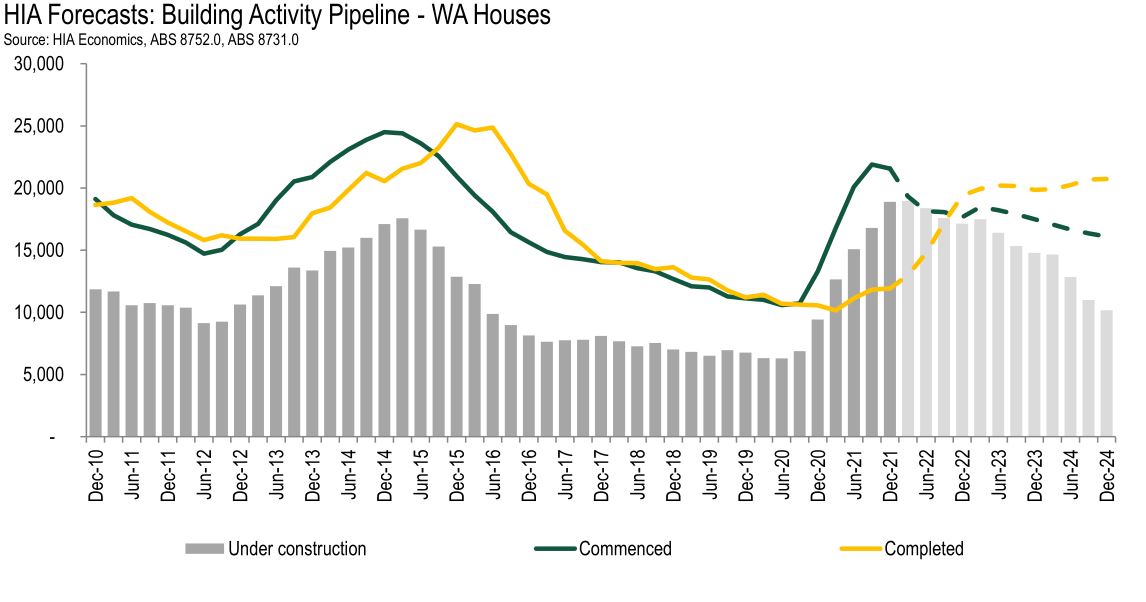 Mr McGowan added there had been a lot of positive outcomes due to the increased pipeline of work, including more interest from young people in working in construction.

In the year to December 2021, the number of apprentices in the state’s construction sector increased by 35 per cent, Construction Training Fund figures show.

He said HIA’s membership numbers had grown by 10 per cent in the past two years, as builders recognised the value of the industry group during COVID.

Mr McGowan said shortages in skilled labour and supply chain difficulties were affecting builders’ capacity to complete jobs on time and within budget.

Builders struggling to reach the phases of a build where they would receive progress payments was a knock-on effect, he said.

The collapse of Jaxon, Pindan and Probuild in the past 18 months has shown the high level of exposure to risk construction companies have.

Though insolvencies in the construction industry have decreased by 31 per cent compared with pre-COVID levels, the threat of going under is very real for many.

“Businesses in all sectors go bust in all sorts of cycles, and construction is no different,” Mr McGowan said.

“In WA, we’ve been able to weather the storm to some regard [but] being able to get more skilled labour into WA, whether that’s through training or interstate or international migration, will help process some of those jobs.”