Having taken Perth by storm in the past year, Uber is planning a new car pooling product that could cut traffic congestion and transportation costs if the experience in other cities is repeated, general manager (Australia) Simon Rossi told a Business News Success & Leadership breakfast this morning. 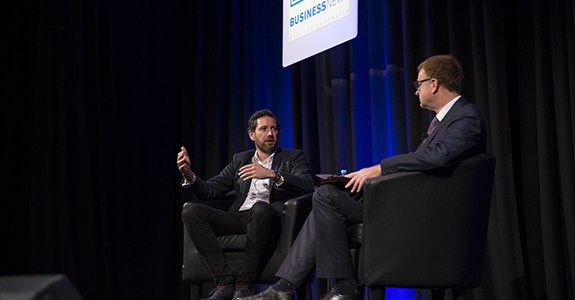 Having taken Perth by storm in the past year, Uber is planning a new car pooling product that could cut traffic congestion and transportation costs if the experience in other cities is repeated, general manager (Australia) Simon Rossi told a Business News Success & Leadership breakfast this morning.

UberPool, a new service the company launched last year in San Francisco, enables riders to share the cost of journeys by picking up other passengers along the way.

In doing so, ride sharing becomes cost competitive with owning a car.

Both consumers and drivers benefit, with drivers earning higher fees and consumers paying a lower fare each, Mr Rossi told the S&L breakfast.

“As we continue to push earnings for the driver up we can actually lower the prices for the consumer,” Mr Rossi said.

“(As the cost falls so low) people start selling their cars, and they start to rely on this type of transport.

“It actually becomes more economically viable to not own a vehicle in the city.”

He said that would dramatically improve asset utilisation for cars, ultimately resulting in lower congestion.

Mr Rossi pointed out that traffic congestion diminishes considerably in cities like Melbourne and Perth during school holiday periods - when the amount of cars on the road is reduced by just 10 per cent.

Only a small change needed to be made to vehicle utilisation to dramatically improve congestion, he said, with the flow on impact of lessening the need for infrastructure spending.

UberPool has been launched in Los Angeles, Paris, New York and Austin, Texas.

Uber, which was valued at more than $40 billion late last year, recently released data indicating the new product line had been very successful.

In the company’s hometown of San Francisco, it estimated the pool service had saved nearly 674,000 miles of travel distance in just four weeks.

Uber’s formidable US$41 billion evaluation reportedly makes it the largest privately held, venture capital-backed company in the world, and slightly larger than Wesfarmers, when adjusting for exchange rates.

That enormous total is explained by the company’s dramatic growth, with Uber now servicing more than 300 cities in 60 countries.

In fact, chief executive officer Travis Kalanick said in an interview last year that revenue for the company was doubling every six months.

Uber isn’t the only technology company with an eye-popping valuation, either, especially when considering the company doesn’t actually own any cars.

Airbnb, which enables consumers to rent accommodation from owners of apartments in competition with hotel chains, was recently valued at $10 billion.

Again, this comes despite the company not owning any hotels or living quarters, with the business making use of otherwise underused assets owned by its 1 million plus listers.

Dropbox, a cloud storage system, was valued at $10 billion, while WhatsApp, an instant messaging application which claims to have 800 million active users, was purchased by tech giant Facebook for $19 billion last year.

Australia is having a crack at digital disruption, too.

Sydney-based AirTasker was recently estimated to be worth $10 million, while Perth-based Norwood systems is undertaking a backdoor listing on the ASX.

Norwood intends to employ the asset utilisation mode too, with a system that searches for spare capacity on phone networks when channeling calls.