Literary, artistic and theatre performances have a habit of creating memorable experiences at the most unexpected times. 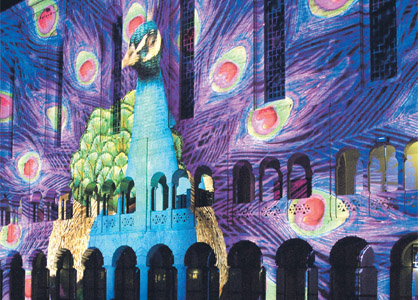 ON THE MARK: The LUMINOUSnight display at UWA was a clever, humourous and entertaining journey through the university’s 100-year history. Photo: UWA

Literary, artistic and theatre performances have a habit of creating memorable experiences at the most unexpected times.

HOW often are you astounded by something you see at a cultural event? Not often, I imagine.

I try to attend as many performances as possible; always looking for something really different, challenging to both my view of the world and to the people involved. I like to be surprised on the up-side.

I have had a few very memorable moments.

Watching The National Theatre of Scotland’s Black Watch at the Perth International Arts Festival a few years ago was one such experience. I was an invited guest so, perhaps, I attended with less expectation than someone who had researched the event and purchased their own tickets.

The whole show was mesmerising, mixing the brutal with the humorous to provide a contemporary view of war and its impact on those who do the fighting.

Around the same time I attended another festival show called The Angel Project. Living statues were present in a dozen locations in Perth, often disused buildings, alleyways or other out-of-the-way places, many of which I visited for the first time, despite spending most of my life in Perth. It was an eye-opening experience.

Many moons ago, when living in London, I went to see comedy science fiction writer Douglas Adams speak at the Royal Geographical Society about his new book, a very serious story of searching for animals that were on the verge of extinction, called Last Chance to See.

He was as entertaining in real life as he was in the books he had written previously.

Another time, I helped out at the Perth Writers’ Festival. Being in the background, and able to come and go as I pleased, allowed me to sample the talks of so many writers in a way that would have been impossible if I had booked and paid for certain events - and arrived with expectations to fulfil.

Overseas I have some other unexpected surprises. One stand out was The Hermitage museum in St Petersburg, Russia. Travelling through the former USSR in 1993, my expectations of such a dour and rundown country were low. Yet both the building and the art contained within were amazing.

Last year, at the opening of PIAF, we took our children to the plaza area of St Georges cathedral. Again, my expectations were muted. My experience of such events usually involved a struggle to find a good vantage point and then an underwhelming performance.

That is only magnified when you have children whose lack of patience and height is magnified exponentially in a crowd straining to see for itself.

The 2012 show, which thickly shrouded the streets of Perth in millions of feathers from innumerable unfortunate white birds, was magic. It left a mark that was not expected.

Last weekend I attended the LUMINOUSnight display to mark the centenary of the University of WA. I had not subscribed to the hype that was going around prior and went to the occasion without really thinking about what it would look like.

I have seen simple versions of such shows before and I am aware of their usage at major tourism venues.

But nothing had quite prepared me for the show that was projected on the walls of Winthrop Hall, magnificent as that building is in its own right.

The history of the university was told through pictures, graphic art and animation in a way that was clever, humorous and very entertaining. The light projections did not just use the walls as a canvas, they were incorporated into a breathtaking display.

Well done to all those involved, including the management, which would have had to approve an enterprise that would not have been cheap and offers little opportunity for repetition.

SPEAKING of being astounded, the revelations last week that professional football teams might have been engaged in doping, had links to organised crime and even match fixing was a bolt out of the blue.

Clearly the work by a few intrepid journalists and some brave whistle blowers over many years to uncover Lance Armstrong’s decade or more of cheating, denial and cover-ups (read David Walshe’s Seven Deadly Sins), has caused a chain reaction.

Conduct in the field of sports science that was previously considered innocent innovation is now looking a lot more like some form of dark art. A former Essendon footballer’s claims he was going off-site for injections and consuming potions with inexplicable contents sound more ominous now than they might have before.

Seeking a competitive advantage is the big challenge wherever there is money to be made. Stock exchanges the world over have tried to stop people taking advantage of their inside knowledge with all sorts of rules that attempt to create a level playing field.

In sport, the temptation to cheat has always been there. As soon as winning has a pay-off - not necessarily just money - the cheats have always sought to prosper.

Drugs in sport is just the latest version.

Team sports have been less obvious a place for this to occur. Much less rides on the performance of one individual; winning is often less about endurance and more about skills and team play, and hiding cheating among a group of people is considerably more difficult than in an individual sport.

Armstrong showed, though, that in an endurance sport with a small team, it was possible to cheat in a big way.

We may now find that cheating is possible in team sports where the players are not openly flouting the rules, they are just following procedures that they have been told are legal by the institutions that employ them and guide much of their daily activity. Intriguingly, under such conditions, drugs start to offer benefits that outweigh the risks.

Professional sports people wear out, so managing their recovery better helps get more from them -enhancing both their week-to-week performance and their career longevity. That is cost-effective for the club that employs them.

Also, if drug usage can be hidden, then the benefits of incremental improvement across a group of players can actually magnify the effect. Sure, an average player won’t pass the ball or read the play any better, but he might be fitter, stronger and less prone to injury. Times that by a squad of 30 players and you start to receive some payback.

All of which leads me to an awkward question.

In my view, professional sport always leads to this kind of risk. We had cheating in many sports with money long before drugs came along.

But should we care? Sports such as car racing, cycling, yachting, swimming and cricket have all had advances in equipment that have given participants the edge, in many cases leading to bans or attempts to restrain development to provide a level playing field. If one bike rider in the Olympics has carbon fibre and another is riding on heavier material, how is that fair when it comes to testing the raw ability of each racer?

Aside from illegal drugs, sports science has already played a big role in helping some athletes perform better than others. Physiologists, psychologists, physiotherapists, nutritionists and specialist doctors have been at work in clubs and teams for decades.

Is that all bad?

No. Sport has pushed equipment manufacturers and health professionals to the boundaries of innovation, sometimes providing real live testing of substances or practices that would otherwise have been ignored. Many of these things have entered more mundane parts of human life, improving the efficiency of vehicles or the ability of business people to overcome jetlag. Each example is small, but collectively they make a difference.

The purist in me struggles with the concept of allowing such innovation with drugs. We all prefer the illusion that, but for some genes and the right type of focus, we could be a star athlete.

But how many winners in recent times have been cheats? Would we, as humans, be better off allowing those who want to push the boundaries with their bodies to do so?

It is a tough question ... and I don’t yet have an answer.