Scientists and engineers in Perth have begun quietly setting up a centre which could encourage more floating gas projects off Western Australia's coast and create local jobs. 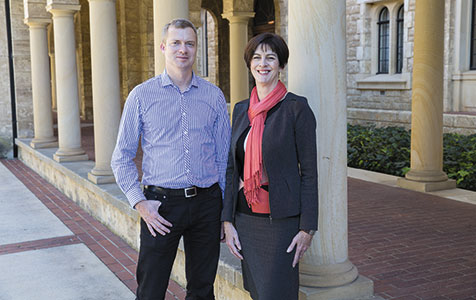 INNOVATE: UWA’s David White and Jill Stajduhar are helping set up a floating systems centre that will encourage industry to seek solutions from its Perth base. Photo: Attila Csaszar

Scientists and engineers in Perth have begun quietly setting up a centre which could encourage more floating gas projects off Western Australia's coast and create local jobs.

A recent parliamentary inquiry into the economic impact of floating liquefied natural gas on the WA economy took the view that FLNG presented WA with unique opportunities despite potential threats created by the technology.

The negatives included the loss of local construction jobs and reduced royalties for projects undertaken outside of state government waters, the committee found.

Members of the Western Australian Energy Research Alliance, University of Western Australia, CSIRO and Curtin University have started taking advantage of those potential opportunities, including securing local specialised expertise and working with industry on local projects.

Led by UWA, staff have begun work on a centre they hope will make Perth the global hub of knowledge of floating technologies such as FLNG as well as the widely used floating production, storage and offloading units (FPSOs), pipelines and even renewable technologies such as Carnegie’s wave energy.

UWA Energy and Minerals Institute associate director Jill Stajduhar told Business News creating the centre would not guarantee companies would build more projects offshore WA, but collaboration on other projects, such as the North West Shelf, had paved the way for a successful model.

“Will it be a key decider for a company, possibly not, but it will be an amazing added value for the industry,” Ms Stajduhar said.

“If the university … can partner well with the Woodsides and Shells and the other companies then there’s a real prospect for Perth resolving some of the issues that were wrestled with in the state FLNG inquiry.” The floating systems centre will be located at UWA and draw mostly on the expertise of its academics, engineers, PhD students and industry members, who will turn their focus to improving floating technologies.

UWA Shell EMI chair Winthrop professor David White said the centre would be home to hundreds of staff and the funding model, which will rely largely on government and industry support, had not yet been finalised.

“In our small way the floating systems centre is really about trying to upskill Australia’s workforce and make sure we’ve got smart people focused on the questions that need addressing,” professor White said.

The centre will also bring together organisational psychologists and safety workers, who will work with scientists, engineers and industry to ensure offshore floating projects address issues affecting workers on board FLNG, many of which have never been dealt with before.

“On Prelude ... they don’t come off during a cyclone, which you do on other platforms, so there’s going to be some interesting scenarios,” professor White said.

The floating systems centre will increase UWA’s breadth as a expert in ocean engineering, taking its capabilities from subsea facilities, including its world-class geotechnical centrifuge and the world’s only O-Tube, which can simulate the effect of cyclones on underwater pipelines, to the surface.

“There’s lots of lovely challenges that the scientists absolutely can’t wait to get their hands on,” Ms Stajduhar said.

“I think (this) gives other people within the community more opportunities which means more jobs, and more companies don’t disappear, they actually blossom because they’re getting the latest information.”