Political leaders would do well to read a recent UWA report, which targets unsustainable expenditure and plots a prudent economic pathway. 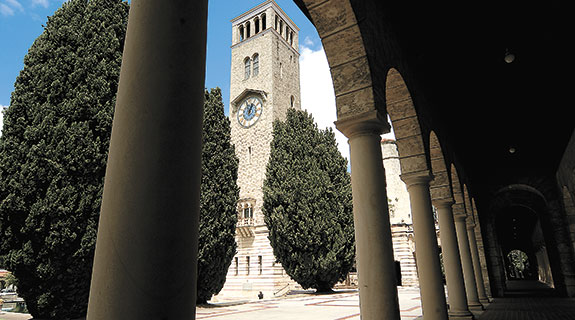 BRIGHT FUTURE: UWA is biting the bullet on revenue and costs.

Political leaders would do well to read a recent UWA report, which targets unsustainable expenditure and plots a prudent economic pathway.

For those who worry about how governments of this country have overcommitted to spending (to our possible future detriment), there is a great lesson in a document released by the University of Western Australia recently.

While the ‘Securing Success’ paper is not about governments, it encapsulates all the troubles surrounding them.

The paper is about UWA, which, it appears, is government writ-small.

Many of you will be familiar with the backstory to this document. Regrettably, I suggest, the harshest of its outcomes became well known when the institution informed its staff before Christmas that 300 people were to be cut from its workforce.

Out of more than 3,700 staff, in this particular economic environment that sort of workforce shedding may not sound that bad, but it became a bigger news story than some much larger lay-offs occurring elsewhere.

I guess that’s partly due to the nature of universities and the types of people who are involved, including large student bodies with many activists in training.

UWA has had plenty of beltings about the way it has handled that and other public affairs during the past year or so, which may be why the reasons voiced by vice-chancellor Paul Johnson in the ‘Securing Success’ document have gone largely unremarked.

In essence, though, UWA’s problem is the same as the disease that afflicts governments across Australia, especially in this state.

The cost of its employees is too high and, as a result, it is diverting revenue required for capital programs to recurrent spending. It is unsustainable.

Professor Johnson outlines the issue whereby UWA, through various policies, has been out-positioned by other institutions. This has resulted in a higher cost of teaching students and less ability to grow revenue in areas where there has been the most opportunity.

I am not aiming here for a detailed examination of the UWA case, but Professor Johnson says the university has a self-imposed cap on international students, who typically pay much more than local students. Due to some of its policies, the university has pushed more of the foreign fee-payers on its books into fields such as science, which generate a lower return for UWA than those in courses such as business.

But it’s not just all on the revenue side. Compared with some leading rival universities, UWA academics cost more as a percentage and per employee than elsewhere. And the benchmarks used are significant – the University of Melbourne and University of Queensland were key examples.

That has left, according to Professor Johnson and his senior deputy vice-chancellor, Dawn Freshwater, a deficiency in funds to spend on things such as the upkeep of the university’s beautiful buildings and investment in IT infrastructure – the latter an increasingly vital component in a knowledge business like tertiary education.

This sounds so familiar.

In my view, the big difference between UWA and government is that the university is biting the bullet and making changes, no matter how hard they may seem or how badly communicated some elements were.

The world has changed and, in this example, it really isn’t completely driven by the WA economy.

Of course, Professor Johnson is not a politician. Students don’t vote on issues such as academic salaries or IT investment. Universities may have their interest groups, but there isn’t the gradual paring back of reform options until there is no change.

While some of the noise coming out of UWA might seem like politics, Professor Johnson has the backing of his board and the understanding of the wider community that sustainability sometimes comes at a cost.
It’s a pity real politics isn’t so simple.

While there would be no pleasure in taking charge of such a program (and it needs to be handled carefully as it is that expenditure that has helped build UWA’s reputation as a top 100 placegetter), at least there is genuine authority when it comes to the leadership taking the steps that are needed.

It is too tiring to see our political leaders state what has to happen, and then back away at the first hint of a revolt.

Like UWA discovered, from comparing itself with peers that have been adapting their business models for some time, change is inevitable; and if you live beyond sustainable means for too long, the recovery period hurts more and takes longer.