US market beckons for Erceg trucks

A PERTH engineering company that has created a niche for itself in the lucrative mining vehicles market is hoping to do the same in the US. 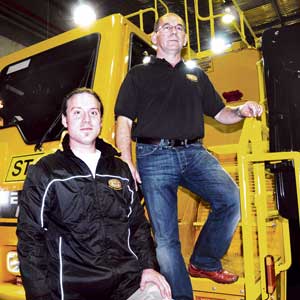 A PERTH engineering company that has created a niche for itself in the lucrative mining vehicles market is hoping to do the same in the US.

Malaga-based Erceg Mining Trucks provides a variety of specifically tailored multi-purpose service trucks to some of the world's largest mining organisations in Australia.

Currently at MINExpo 2008 in Las Vegas, promoted as "the world's richest deposit of mining technology, services and products", father and son team, Ivan and Marlon Erceg, are showcasing their multi-purpose vehicle range to the elite of the world mining industry.

EMT was founded in 2002, as a subsidiary of Mining Equipment Spares, to specifically handle the design, development and construction of custom-built MPVs and separate operations from the company's core refit and maintenance business.

Speaking to WA Business News from the US, Ivan Erceg, in his role as Mining Equipment Spares managing director, said the truck division had already supplied in-field service vehicles to BHP Billiton, Rio Tinto Iron Ore, Henry Walker Eltin and Orica, and was keen to expose its products to an international audience.

"They are ordering one, two, three or five trucks and each truck is worth around $1.9 million," he said.

"But that varies from truck to truck, depending on what sort of equipment they need."

Having built 15 trucks already, generating a turnover of almost $30 million, EMT is in great demand.

"We're in the market of making specially designed vehicles to suit the conditions and rugged terrain of mining sector and still account for the operation of the vehicle at a cost-effective price," Mr Erceg said.

"Our competitive edge is our ability to customise vehicles to carry out specific functions in particular environments - it's a very specialised, totally tailored service."

EMT seems to be without any direct competition for what is a very rewarding business.

"Tailoring them [MPVs] individually to the needs of our clients, there's no-one else doing that in all of Australia," Mr Erceg told WA Business News.

"There's road trucks...like Mack or Kenworth, these are the sorts of trucks that compete with ours but not on the same level because our trucks are made for the mines and mining conditions."

And the biggest players in the mining vehicle market, such as Caterpillar and Komatsu, don't seem to perceive EMT as a threat.

In fact, it appears that the organisations feed off each other.

"We seriously cooperate with Cat, we use all their components," Mr Erceg said.

"Everything that is on our truck is Cat made, except for we make the cab, the chassis and other smaller components, which is quite a few others and which are very important."

"We're a Cat original equipment manufacturer, an OEM, so we use all their components, and their engineers, to be able to manufacture all our equipment," Marlon Erceg said.

"Cat and Komatsu are not threatened by us, and Cat is happy to provide us with parts, equipment and support.

"It's not competing against the Cat range, it complements their range of vehicles."

And he is confident their presence in Las Vegas will help secure the future success of the company, opening up a major export market.

"We've not yet made any sales in Vegas, but of course we are hopeful to get large exports out from Australia being a manufacturer in Perth, which is quite rare," Marlon Erceg said.

And it sounds like the company could be heading into some very exciting territory, with military applications a likely growth area.

The Ercegs believe there's potential for between 30 and 50 trucks to be built each year.

"They can have a number of uses; fire, forestry, servicing, explosive vehicles, water carts, and military - rocket launches and stuff like that," Marlon Erceg said

"It could definitely be part of the future."