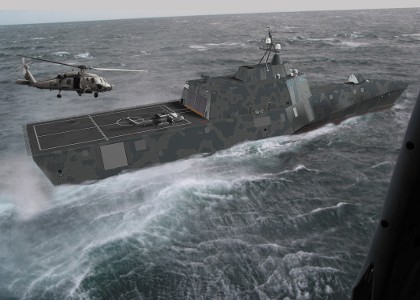 The US Navy announced today it had exercised contract options for the construction of the eighth and ninth Joint High Speed Vessels (JHSVs), taking the value of JHSV work awarded to Austal to US$1.45 billion.

The 100-metre long aluminium-hulled catamarans can transport more than 300 troops plus vehicles at a speed of more than 40 knots to a range of 1,500 kilometres.

The two additional vessels will be constructed at Austal's other shipyard in Mobile, Alabama.

The contract award follows Austal’s surprise announcement late on Friday that it had slipped to a $3 million net loss for the six months ended December 31, despite a 50 per cent increase in revenue at its United States operations.

The company said the operating loss was driven by low activity levels in its Australian business.

Mr Bellamy said the US operation was also impacted by challenges associated with producing the first JHSV vessel, which will be delivered later this year.

"That provides us with significant marketing leverage with which to grow our international defence business in ships, systems and support," he said in a statement.

Austal was awarded the contract for construction of the the first JHSV in November 2008.

There were options for nine additional vessels to be struck between 2009 and 2013.

The first vessel, USNS Spearhead, is due for builder sea trials in March.

The second vessel, Choctaw County, is now taking shape while modules for the third vessel are under construction.

Mr Bellamy said the new JHSV contracts would contribute to the company's stability and future growth.

"That enables us to plan our production approach to deliver high quality, affordable ships in the most efficient way possible and to make and implement medium and long-term strategies."

Australia has no comparable vessels in service, although it pioneered the concept.

In 1999-2001 it used a leased catamaran, made by Tasmanian shipbuilder Incat, to transport troops from Darwin to East Timor at the peak of military operations.

The US Navy and Marines subsequently conducted their own trials using catamarans leased from Austal and Incat, leading to the establishment of the JHSV program, which could eventually involve 23 vessels.