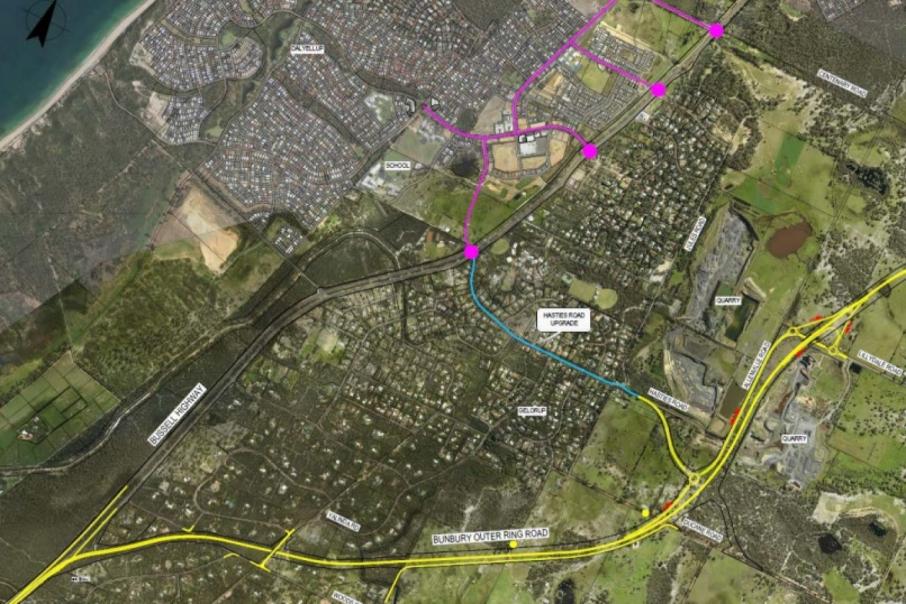 The two short-listed consortia will be invited to submit detailed proposals to design and construct the Bunbury Outer Ring Road. Photo: Main Roads

ACCIONA has formed a powerful consortium with ASX-listed contractors NRW Holdings and MACA, along with AECOM and Aurecon.

The two short-listed consortia will be invited to submit detailed proposals to design and construct the Bunbury Outer Ring Road.

It is anticipated an alliance contract will be awarded before the end of the year, with construction of the project to begin in 2021.

CPB Contractors (formerly Leighton Contractors) has long been the leading contractor in the WA infrastructure market, especially since John Holland became mired in problems with the Perth Children’s Hospital contract.

CPB’s recent wins include the Thornlie and Yanchep rail projects, which are being delivered through a single $1.05 billion contract.

Its short-listed competitor in that case was a consortium led by ACCIONA subsidiary Coleman Rail.

As well as delivering multiple Main Roads Western Australia and Public Transport Authority projects, CPB is a major player in the resources sector, having won big contracts with BHP and Rio Tinto recently.

ACCIONA’s largest contracts in the WA market are for engineering and construction of two waste-to-energy projects under way at Kwinana and Rockingham, worth a combined $1.2 billion.

“Maximising local business procurement is a key objective for the project,” she said.

“We have also opened a local capability fund to support small and medium South West firms to tender for work on Bunbury Outer Ring Road.

“Significant mandatory targets for Aboriginal employment and Aboriginal business involvement will need to be met by the alliance contractors during the delivery of the project.”

As well as the main construction contract, Main Roads will be calling for early tenders soon for the supply of an initial quantity of crushed rock road base.

“The Bunbury Outer Ring Road project has been planned for a number of years, recognising the significance of delivering vital infrastructure to provide a safer and more efficient road system for the South West of WA,” he said.

“Bunbury Outer Ring Road will provide relief for local residents by removing freight and regional traffic from local roads while maintaining easy access to Bunbury and other regional destinations.