Tuning in to a culture of giving

MUSICIAN John Butler, art advocate Janet Holmes a Court and WA Institute of Medical Research director Peter Klinken may seem to have little in common – and until recently that may have been the case. 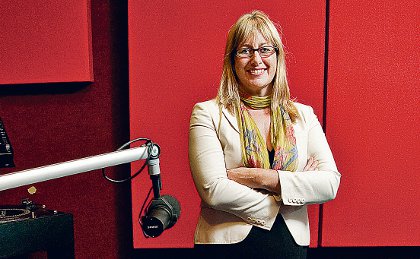 GIVE IT UP: Philanthropy Week is one of Melissa Callanan's first projects since she started with RTRFM in February. Photo: Grant Currall

MUSICIAN John Butler, art advocate Janet Holmes a Court and WA Institute of Medical Research director Peter Klinken may seem to have little in common – and until recently that may have been the case.

That all changed, however, when they collaborated in support of community broadcaster RTRFM’s inaugural philanthropy week.

The trio was among 40 others, including philanthropist Annie Fogarty and Art Support Australia WA manager James Boyd, who took part in the broadcast event, which aimed to inform Western Australians about the broad meaning and application of philanthropy.

With the station operated largely by volunteers, some of its presenters and eastern states counterparts also took place in the event, exploring the giving of time as philanthropic action.

RTRFM general manager Melissa Callanan said having an extensive list of people telling their stories was an effort to capture the essence of philanthropy and keep people interested for the week.

“Philanthropy is an emotional thing, for people to make the choice to give. There are a lot of layers to the stories you can tell,” Ms Callanan told WA Business News.

“Establishing the program, we put a lot of thought into how to make it interesting for a week.

“You don’t want to be saying the same thing again and again.”

Ms Callanan said the idea for philanthropy week came about after discussions around how to diversify RTR’s revenue streams, but that its purpose extended beyond that.

“We didn’t want the idea of philanthropy to only be about us,” she said.

“We also have a responsibility to participate in these conversations at a broader level. It is not about us raising money for us, it is about raising the issue in the community more broadly.

“There is a lot of conversation in Perth that we are a two-speed economy, that there are segments of the community that are wealthy and how does that flow through.

“Ultimately what we want is to participate as a community broadcaster and media organisation in that conversation and create links between people.”

While the event was primarily about generating a conversation around philanthropy in WA, Ms Callanan said the idea emerged when she started looking at ways to extend the community financial support for RTR.

“There is a culture in WA where we are not comfortable with asking,” Ms Callanan said. “Mailing out and asking for money is not something we are used to doing.”

Ms Callanan came to that conclusion when working for the Perth International Arts Festival, with the organisation doing a mail out to its support base asking for stronger financial support.

“We had people write to us with hand-written cheques and people telling stories and I realised then that we, as organisations, need to get better at asking, that there are people in the community who want to give but they don’t know how,” she said.

“We would like to develop a way of activating the conversation post broadcast ... it will be something we look at next year,” she said.