Tuke has power, and the passion 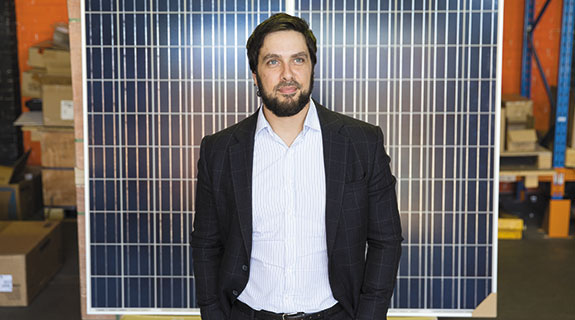 MarkTuke had one main motivation when he gave up his well-remunerated position as chief executive of a public company to pursue an interest in renewable energy – to rectify an oversight.

The oversight, according to Mr Tuke, was Australia’s reliance on coal for power amid such an abundance of alternatives, particularly solar.

While at BigRedSky, Mr Tuke steered the company from trading at a loss to commanding a seven-figure exit sale to Thomson Reuters in less than three years.

His decision to transplant his business skills into a new sector was a rare convergence of a business and a moral opportunity that he couldn’t pass up, he said.

“I resigned from my CEO position for one reason – I wanted to rectify an oversight.

“(That) one of the sunniest countries on the planet relied almost entirely on coal seemed like a travesty.”

While Mr Tuke says he made the leap for only one reason, his success growing Sun Connect over the past seven years – from a startup to employing more than 45 staff and a $20 million turnover – has been due to more than just rectifying a sense of injustice.

Chief among them is what he refers to as a workaholic nature or what the 40under40 judges called his ‘incredible drive’.

“He matriculated year 12 aged 15, became CEO of a public company at age 28 and then set up his own solar energy business, switching cleverly to the commercial sector when the residential market became flooded.

“You get the distinct impression that he could turn his hand to pretty much anything.”

Mr Tuke attributes his drive to lessons learned from his hardworking parents, who ran a small business, and his ambitious and charismatic uncle, who acted as a mentor.

“My parents didn’t have that concept of working nine to five because they couldn’t afford it. I got used to them working literally 16-plus hours a day, six days a week,” he said.

When Mr Tuke set out on his own, he was a teenager with no financial safety net.

From this experience he became sure of two things – that he didn’t like the stress of living hand to mouth, and that he wanted to achieve something noteworthy.

“To have found a good business opportunity that had a noble outline to it seemed too good to pass up,” Mr Tuke said.

His passion for promoting renewable energy and its benefits have propelled him to pursue success, even in a market where selling a sustainable, environmentally product is tough.

“Most business owners in the economy right now that we come across are in too tight a spot to do things for environmental reasons,” Mr Tuke said.

“Getting them to take the leap into solar is almost all about the dollars, but for me personally, and for my staff, a lot of the satisfaction we get is the fact that we know we’re having a positive environmental impact.”

What’s made things even tougher has been building Sun Connect on a foundation of good value and long-term maintenance, not lowest prices like most market competitors, he said.

“There is very little market in Australia for high-quality, high-value (solar). The cost per watt of solar is very low, the margins are very low,” Mr Tuke said.

However, he is buoyed by the potential market for Sun Connect and the rest of the renewable energy industry.

“The lack of solar being harnessed (as an energy source) is a huge financial and business opportunity,” he said.

“There’s more solar workers in Germany than there are US steel workers now, so there’s this big market that hasn’t quite happened in Australia yet and the really big market is the business commercial and industrial sectors.”