Trusts put theirs in CBD values 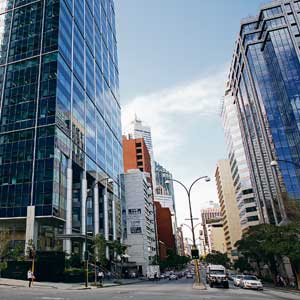 ON HOLD: Despite activity behind the scenes, there’s unlikely to be a fire sale of assets in the CBD. Photos: Grant Currall

Part owned by Macquarie Direct Property Fund, 81 St Georges Terrace is rumoured to be close to sale to a private investor for between $35 million and $40 million.

Charter Hall is also said to be considering putting some of its properties on the market, including its 50 per cent stake in Alluvion.

In the retail sector, Centro is reportedly close to selling its David Jones site in the Perth CBD, which is under contract for between $115 million and $125 million.

Late last year, 111 St Georges Terrace, which is effectively 33 per cent owned by Becton Property Group through other trusts, was withdrawn from the market after failing to find a buyer.

Among the listed property trusts with commercial assets in the Perth CBD are: Charter Hall; Dexus, which owns the Woodside Plaza building; Investa, which holds QV1 and the adjacent car park; Stockland; and Multiplex.

But while the sector has suffered from profit downgrades and asset write-downs in recent times, it is unlikely to result in a fire sale of assets.

One banking source told WA Business News any asset that was servicing its interest was being looked at in a better light by the banks in the current economic climate than in the past.

"A lot of those listed property trusts are in breach ... but because of the low interest rates they're able to service their interest and they won't be sold," the source said.

He expects more pressure to be applied to the assets after the next half-year reporting period, with asset values likely to drop further.

"Some will hold, but some will be forced to sell," the source said.

Sentinel Stockbroking chief executive Norm Robinson said plummeting share prices in the sector were a reflection of the situation, with the latest round of results an indication of what was to come.

He said most would have no alternative but to sell assets, which could be troublesome in the current marketplace where the number of potential buyers was dwindling.

"They'll either have to roll over their debt, which they can't, or sell assets, which they also can't," Mr Robinson said.

"Every listed property trust will look at selling any asset it owns without exception. Nothing is not for sale and it's all a function of price," he said.

"There is money out there," he said.

For the first time in the history of the survey, the median NTA of entities surveyed fell, by 4 per cent, mostly driven by the fall in property valuations.

The historically high gearing level at 44 per cent, almost 100 per cent higher than they were 10 years ago, has exacerbated the mark downs experienced since the emergence of credit market concerns in mid to late 2007.

One property source said there was a lot up for sale in the Perth CBD, but very few were on the open market.

He said that enquiry was picking up, particularly from private syndicates, with interest from overseas investors also emerging.

Most of the activity is reportedly occurring in the lower end of the market, at prices up to $20 million.