Troy Resources will tap the market for about $38 million through a placement and share purchase plan to fund development at its West Omai gold project in Guyana. 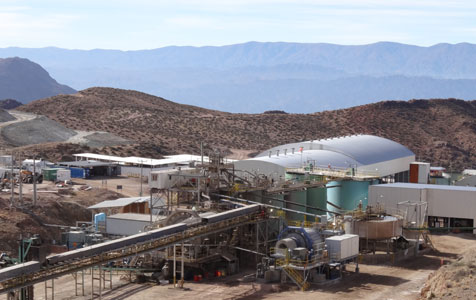 Troy Resources' processing facilities at the Casposo gold mine in Brazil.

Troy Resources will tap the market for about $38 million through a placement and share purchase plan to fund development at its West Omai gold project in Guyana.

Troy will issue about 22 million ordinary shares at $1.25 per share to institutional investors to raise $28 million.

The issue price represents a 5.9 per cent discount to the company's five-day volume weighted average price.

The company will seek to raise a further $10 million through a share purchase plan at the same price.

Troy is expecting to complete a pre-feasibility study at West Omai in the June quarter.

The company has estimated its inital capital expenditure requirements for a carbon in leach plant and mining operation at $US86.8 million.

"We are currently in discussions with Investec regarding a new debt facility that, if secured for the facility size currently contemplated together with the funds to be raised by the placement, would complete the funding requirements for West Omai."

Troy this week became the latest Perth-based miner to take a financial hit on the back of a softer gold price, reporting a half-year net loss of $6.8 million.

The result is a far cry from the $13.5 million profit the miner recorded in the previous corresponding period.

The fall in revenue was also partly influenced by a fall in gold equivalent production at the company's Casposo and Andorinhas mines in South America.

Troy shares are in a trading halt, having last traded at $1.325.