Trio of chiefs innovate at home

Aged care and retirement living organisation Maurice Zeffert Home is not run by one chief executive, but three. 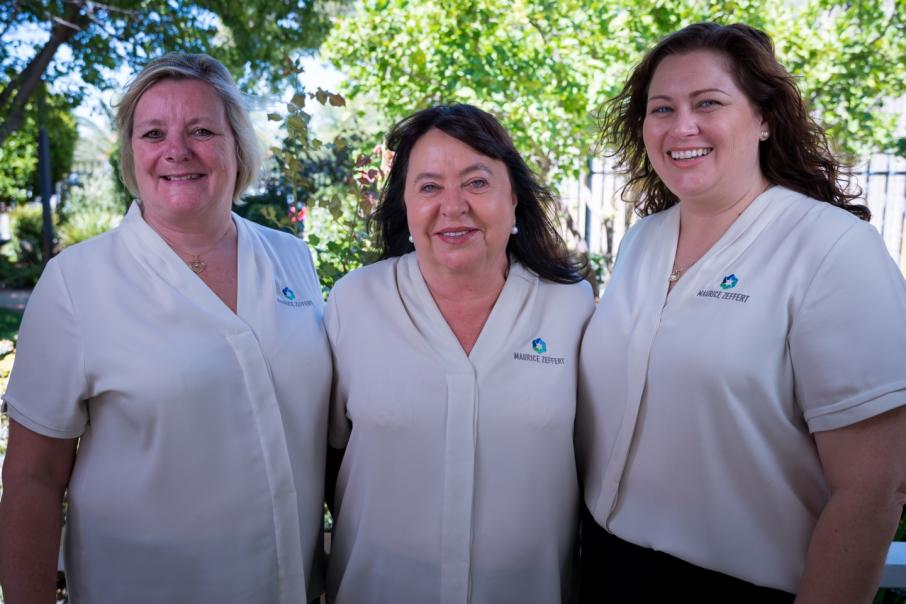 Eileen Johnstone (left), Yvonne Goldman and Amanda Macnamara have been leading the organisation as a team since January 2018. Photo: Miles Tweedie Photography

Aged care and retirement living organisation Maurice Zeffert Home is not run by one chief executive, but three.

The three directors filled in when Mr Preece was travelling for work, and decided they would like to hold the role full time.

Ms Macnamara said they undertook research to find other businesses with similar leadership models but did not find many examples from organisations based in Australia.

“We thought it was a bit of a gamble to propose it, but we thought ‘why not, the worst they could say is no’,” Ms Macnamara told Business News.

Initially, the board did reject the proposal.

Luckily for the trio, the board president resigned and the successor, Irwin Tollman, was keen to give the idea a go on a 12-month trial basis, starting in January 2018.

“That first 12 months we worked really hard to try prove ourselves because there were a lot of people who were unsure if this was going to work,” Ms Macnamara said.

The three-member executive team has been in charge for the past three years and now manages about 125 staff, working across the Dianella-based facility’s 90 aged care beds and 51 retirement living units.

Ms Macnamara said some of the immediate advantages to the collaborative model included the cost savings of one less management salary, the fact all three already had working relationships with the staff and residents and their different skillsets.

“We all have different strengths and it means we can work within our comfort zones,” she said.

“If it’s a care question, that’s outside of my comfort zone so I can do as much as I can with people management, but I’m not an expert in care.

“Between the three of us, we cover every gamut.”

Ms Macnamara said the trio was not always on the same page, but discussing competing viewpoints made for better decision making.

“If you have a single, standalone decision maker in an organisation then you are going to have repetition in the trends of that decision making,” she said.

“Whereby every time there is a decision to be made here, you have got three different opinions on that.”

Ms Johnstone said the leadership model was initially snubbed by peers in the aged care sector, but after seeing it in operation, people were now interested in how it worked.

“I think one of the biggest achievements for us was being recognised for the role by our peers,” Ms Johnstone told Business News.

Ms Johnstone said implementing the leadership model had improved the reputation of the organisation.

Ms Macnamara said she believed the organisation had made a contribution to the sector by being innovative.

“It was quite a stale sector, it hasn’t really evolved and you have to be dynamic to stay competitive in the sector,” Ms Macnamara said.