Travelling well despite absence of a ‘boom’

WA is well placed to deal with any future economic upheaval. 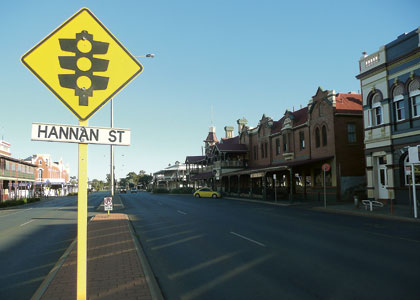 CAUTION: Despite plenty of gold mining activity in the region there is a distinct lack of vitality in Kalgoorlie.

WA is well placed to deal with any future economic upheaval.

A LONG weekend trip to Leonora in the Goldfields might not be everyone’s idea of an ideal break, but October is a great time of year to visit the fringes of the Wheatbelt and penetrate the harsh inland that hosts most of our mineral deposits.

As a tourist you only get a glimpse of what is going on in economic terms, although the unusually close proximity of industry to the community in the Goldfields does provide insight that might be unavailable in other areas.

Firstly, Kalgoorlie did not appear, to me, to be a town experiencing any form of boom conditions.

Perhaps it is typical of a town like this. With an ageing heart that has room to spread beyond where a tourist might venture, there appeared to me to be far too many unlet retail premises and closed buildings of prominence to suggest any form of boom was taking place.

This is not to suggest Kal looked poorly; it just lacked the vitality I expected with such a strong gold price.

The flipside of this was noticing that gold mines were operating everywhere we went, the roads were full of equipment and people moving to workplaces, and there was plenty of spruced-up accommodation that appeared to be mining-related.

A good example was in Leonora, where the Gwalia mine still operates under the management of St Barbara Mines.

There the local motor inn had more than a whiff of ‘brand new mining village’ about it. Satellite dishes and lush grass strips showed that, at least at this side of the mining services sector, things were still running strongly.

Regrettably, from a tourist’s point of view, we were unable to stay in the former Gwalia mine manager’s residence built by Herbert Hoover when he was a resident, turning the low-grade deposit into a profitable mining operation. Mr Hoover, for those who haven’t heard the story, went on to become US president.

This pursuit of low-grade ore was unusual in those days but it is the kind of ingenuity that has kept the Goldfields alive for more than a century.

It has been a while since I travelled to Kalgoorlie or Leonora by road, but nevertheless the relative density of the woodlands en route came as quite a surprise.

Much has been made of saving the Great Western Woodlands that extends throughout these parts, but the fact is the region’s habitat appears, to my untrained eye, to be thriving. That is because coal-fired electricity from Collie and gas energy delivered direct to many mines in the region from the Pilbara has alleviated the need to cut down the forests for fuel.

During the early mining activity in the region, 30,000 tonnes of timber was cut annually to power the towns and mines. It is hard to imagine what that did to the countryside or how long it took to recover.

Perhaps it is still returning to its original condition. Whether or not it is still revegetating, it is one of the biggest carbon sinks in the world and offers a prime example of how the environment can recover from appalling treatment.

We don’t hear much about this bit of environmental good news, do we?

MY experience in Kalgoorlie and the apparent absence of a boom is not all bad news.

I am a big believer the commodity cycle is returning to more normal levels and that both business and employees need to be ready for this, so that we are braced for change, rather than shocked by it.

The evidence on the streets of Kal provided me with hope that we are ready for the settings to change. At a corporate level we know that gold companies are operating at their limits to make the most of high prices.

The fact that isn’t obvious on Hannan Street simply suggests companies and workers are being cautious when it comes to spending.

While this might have ramifications for retailers that like free-flowing spending, the truth is that flood and drought are no better for shopkeepers than they are for farmers. What works best in an economy is steady business.

I am convinced that business is actually well placed to deal with tougher market conditions, a signal of which we saw when Fortescue Metals Group stopped expansion plans and laid off a big number of workers.

I have talked to many people in business, especially lately at the big transactional end of the spectrum in corporate finance and real estate. People in these sectors have provided me with anecdotal evidence that activity had returned to a preboom level - a return to normal, in other words.

This may seem harsh for those who have grown accustomed to boom conditions. Some won’t be able to handle it, but for others it may well be reasonable, especially companies that have been more cautious about business since the GFC hit them in late 2008.

I believe we were lucky to experience the GFC like we did. Not that we sidestepped it, but rather were given a few more years to get prepared for it.

Whichever way things go from here - up or down - Western Australian businesses are better placed than most to take advantage of it because they have been preparing for the worst anyway.

FARMERS again do themselves no favours with the silly debate around the Wheat Export Authority.

Thankfully WA’s farmers are on the right side of this debate, from my perspective. The nation’s most efficient fanners are opposed to controls on their ability to export while their less efficient peers across the Nullarbor want the current regulation to remain.

Why any business, or cartel of businesses, ought to be able to control where another business can sell is a joke. That the Liberal Party would support such activity is even worse.

Several times during the past century when the protectionist east coast states wanted to impose their silly rules on WA, the state’s leaders extracted a price for it. A good example was when eastern states’ farm equipment manufacturers wanted a tariff to protect their industry, WA received additional Commonwealth grants to make up for the cost imposed.

This and similar reasons were why WA has, for a long time, been on the receiving end of Commonwealth grants - not because we were a mendicant state.

If the Liberal Party wants to impose an unnecessary regulatory burden on WA’s farmers to suit their east coast constituents, they ought to be talking about how they will increase the GST allocation to WA to make up for it.