The Western Australian resources boom of the past decade is well documented; not so widely recognised, however, has been the associated growth in civil infrastructure construction. 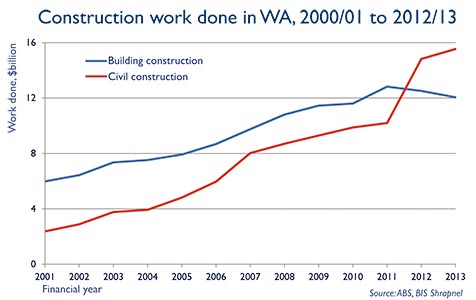 The Western Australian resources boom of the past decade is well documented; not so widely recognised, however, has been the associated growth in civil infrastructure construction.

However developments in this latter ‘boom’ can be tracked thanks to the Australian Bureau of Statistics, which separately records construction work done in the building sector – residential, commercial and industrial – and in civil construction categories such as roads, rail, harbours and pipelines.

In the 2000-01 financial year, about $6 billion of building construction work was undertaken in WA, compared with less than $2.5 billion worth of civil construction.

The gap widened in 2012-13, with building falling while civil infrastructure construction increased.

Most of this rise in civil construction has been due to resources-related investment by the private sector. Of the record $15.5 billion invested on infrastructure projects last year, $9.8 billion, or 63 per cent, was resources-related.

Most of this expenditure was on port, rail and pipeline infrastructure associated with iron ore and oil and gas developments in the state’s north-west.

While excessive public sector spending on infrastructure has been blamed for the state losing its AAA credit rating, the government has acknowledged it was its hospital building program that most strained WA’s finances, not spending on civil infrastructure.

In fact, the government actually spends less now on civil projects than it did three years ago. Public sector spending on civil infrastructure peaked in the 2010 financial year, at just more than $4 billion, and is expected to remain under that mark until at least 2017.

So while WA’s population grows at a nation-high 3.4 per cent per annum, the government is treading water when it comes to delivering the economic infrastructure that will enable our continued prosperity.

Of course, funding that infrastructure is a challenge, but one that can be met. First, however, the government needs to recognise it can’t hope to unlock private investment without a detailed infrastructure delivery strategy.

We can’t afford multi-billion dollar decisions being made on the spur of the moment during an election campaign; we need an evidence-based, transparent process that identifies and prioritises infrastructure project delivery.