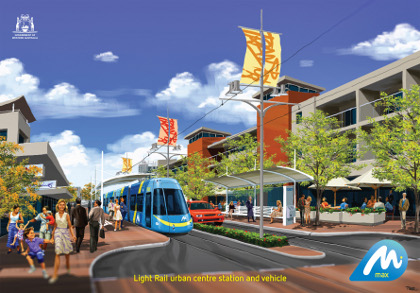 An artist's concept of an inner city tram stop.

The state government has unveiled the proposed route for its light rail system, with nearly $12 million of state funds committed to fine-tune the plan.

The proposed route also links the CBD to QEII Medical Centre and Victoria Park, with planned future extensions to the University of Western Australia and Curtin University.

The government is aiming to kick off construction in 2016, following completion of a planning and design process.

The first stage of the project, extending through the CBD to the QEII Medical Centre and the Causeway, is scheduled to be operational by 2018.

The state government has committed $11.8 million for planning, with $4 million to be tipped in by the Commonwealth.

“This funding will be channelled into public transport corridors that are unable to meet current and future demand,” Mr Buswell said.

“Light rail has been assessed as the most suitable option in these areas. It can move many more people in one lane than any number of buses and cars.”