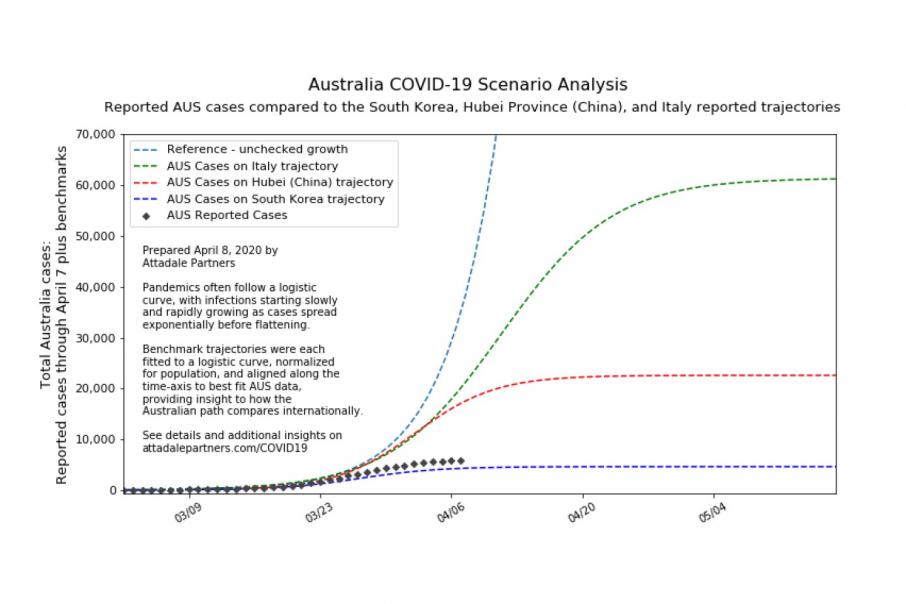 Australia is on a very positive path, based on a logistic model of the pandemic. Source: attadalepartners.com

A schoolmate of mine who is now hunkered down in his home base in the US city of Chicago emailed me the graphics in this article showing how his modelling showed Australia was doing compared to the US.

Perhaps unsurprisingly, Australia’s trajectory using the logistics model is more like South Korea while the US is following Italy. Ouch!

The modelling is done by Geoff Colgan and his colleagues at Attadale Partners, a management consultancy which specialises in, among other things, build and implement predictive models for regulated and complex industries such as financial services, healthcare, and life science. [I have added some notes from Geoff Colgan at the bottom of this article].

It should help us feel good we are on the right track, of sorts.

I’ve asked if he has modelling around other key countries we are watching, especially Singapore and Sweden, two nations with very different approaches that have vied for the attention of ideologists since this pandemic really got going. 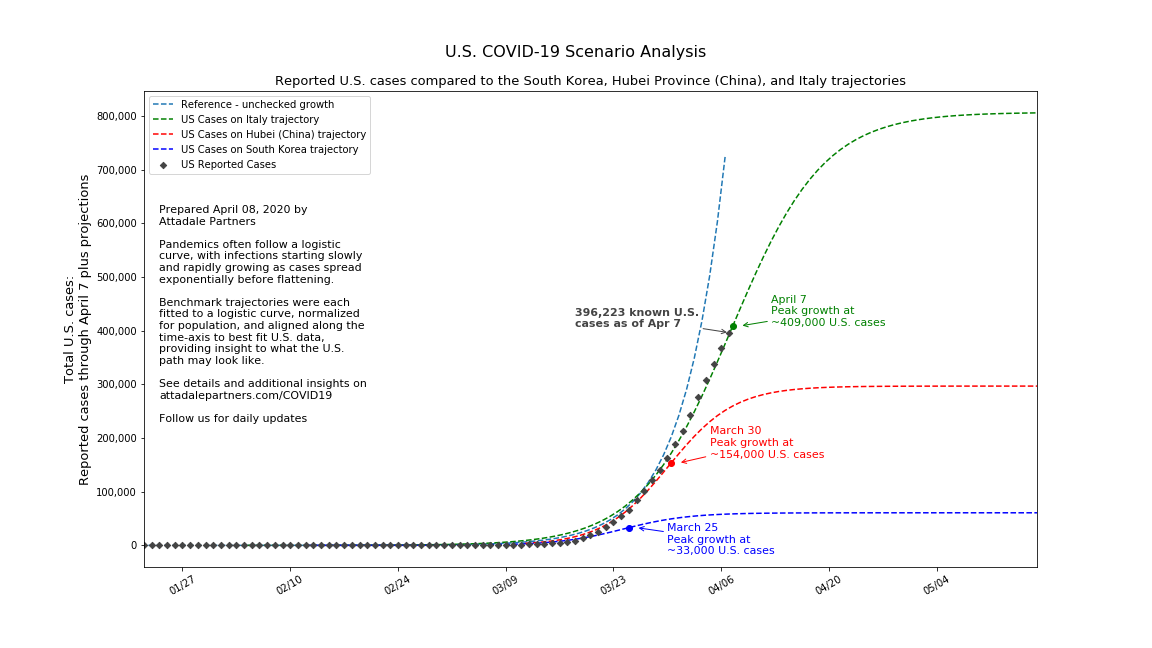 Singapore, like South Korea and Taiwan, has received a lot of credit for stamping its boot hard on this virus from the beginning. With a plan and acquiescent population, pre-pared from experience with SARS, this urbanised island managed to keep schools open and businesses trading by using modern technology, systemic testing and an invasion of privacy that would have been challenging in most democracies.

Sweden has taken a different path. Keeping daily life as normal as possible it has asked its citizens to take necessary precautions, especially the vulnerable, to ensure they stay out of harm’s way while the virus sweeps through the Scandinavian nation.

In a world looking for easy answers, both strategies are now being questioned for different reasons.

Singapore has found outbreaks of a scale that has forced it to tighten movement in the community, including closing schools. It is learning that community transmission is difficult to track because not all people with the virus show symptoms and COVID-19 therefore isn’t easily traceable with surveillance cameras, thermometers and mobile phone signals.

Sweden, too, is coming under pressure from some in its medical community who believe the death rate is racing out of control and more restrictions are needed to avoid a catastrophe.

In context, Singapore with about a fifth of our population had less than 10 deaths from COVID-19 recorded by the John Hopkins University and Medicine resource, widely regarded as the most accurate global measure of the pandemic. It has a death rate of 0.4% of known cases.

I have no news of Sweden’s hospitals been overrun, but given the broad statistics that deaths equal a small proportion of the people who require hospitalisation, I would hazard a guess that its emergency departments are pretty full and its medical staff are feeling the monumental task they are involved in.

The question asked of these statistics is whether Sweden ultimately escapes an uncontrollable surge in unnecessary deaths and gets its population in shape to resume more normal life quicker than elsewhere?

The alternative may be a long lockdown and constant surveillance in a place like Singapore where low infection rates means the bulk of population remains at risk until a vaccine arrives.

Which is better will be known in the relatively near future, but only in pure numbers and economic terms. Again, context is missing unless you consider how each society views mortality and the economy and how they live their lives?

It also exposes some interesting secrets. Sweden is a society of loners, with a big amount of single-person households across all adult demographics.

Singapore has a vast army of migrant workers who live in dormitories and handle much of the city state’s dirty business.

Both of these interesting observations matter when it comes to comparing the pandemic with Australian outcomes.

Then again, so does our geography, climate, wealth, natural and artificial borders, population age, smoking rates, multi-generational households, religious affiliations, system of government, history of civil liberties and numerous other factors to consider on top of their cultural attitude to mortality.

The proliferation of doom and gloom models is why we did our analysis.  There are essentially two ways to model:

We purposefully did not compete with the main stream modelers and predict deaths, infection rates or other statistics.  Our analysis has been consistent though.  For the US Attadale was projecting an inflection around April 6 or April 7 for the past three weeks if we followed the Italy trajectory.  While it is too early to call an inflection, it appears we were close.  Same for the peak daily case count.  What this means is the approach is a useful tool as input to a complex situation.

The importation of the diseases is fascinating.  The Italians brought it to Telluride, CO,  where it was generously spread to all in attendance.   Mexico has traced its seed to the same ski event.

Population density is a key factor as you mentioned.  We have some work being published this Friday where we analyzed Density Normalized data to better understand the impact of public policy and it is quite interesting.

The n=100 baseline is used to represent a critical mass of the disease and an effective starting point, as it spreads exponentially, and slowly at first. It makes sense, that’s what my data scientists tell me.