The honeymoon period for the coalition government, if indeed there was one, is over. 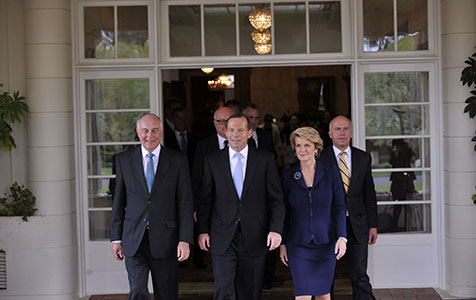 JUDGEMENT: Julie Bishop has been under pressure over the government’s handling of the spy scandal fallout.

There has been an extraordinarily quick turnaround in federal voting intentions since the Tony Abbott-led coalition won the September federal election.

It’s not a flash in the pan. Two polls have recorded big swings.

The biggest was in the Nielson Poll, which had Labor ahead 52 per cent to 48 per cent on a national two-party-preferred basis. There was also a swing in Newspoll, but the coalition still had the edge.

Of particular significance to Western Australia were the state voting intentions in the Nielson poll ‘if a federal election was held today’.  The coalition scored 39 per cent, and Labor 33 per cent; that’s a 5 per cent improvement for Labor over just four months.

What was more surprising was the surge in support for the Greens to 14 per cent, up almost six points since the election. And on a two-party preferred basis, Labor in WA led 52-48 – its best result in years.

Sure, it’s early days and, being part of a national poll the WA sample would have been smaller than usual. But what the Nielson and Newspolls confirm is that the Abbott government has got off to a shaky start. It’s had an extraordinarily brief honeymoon.

Normally governments would not worry that much. But don’t forget there’s the real prospect of a fresh half-Senate election in WA early next year, following the disappearance of 1,350 voting papers in the recent election. In a finely balanced Senate, every seat after the change in its composition on July 1 could be crucial for key government legislation.

The fact that minor party leaders such as Clive Palmer and Bob Katter have visited Perth during the past few weeks indicates they are aware just what is at stake. Labor is too.

WA Liberals must be wondering when the message will get through to their federal leaders. Perhaps the federal decision to find an extra $31 million for local schools next year is an early positive sign.

Foreign affairs issues don’t normally influence domestic voting intentions to any great extent, but the prolonged wrangling with Indonesia over alleged spying by Australia, going back four or five years, has started to have an impact. Notwithstanding the fact that the time in question was when Kevin Rudd was prime minister, Mr Abbott and Foreign Affairs Minister Julie Bishop have been under considerable pressure.

In fact it has been a baptism of fire for the new government while still in the settling-in phase; and the Indonesian leadership has been in no hurry to let the issue die.

Whether this is: based on genuine concern; posturing linked with Indonesian elections next year; testing out the new government; or a reaction to Mr Abbott’s ‘turn the boats around’ rhetoric on refugees, is not clear. But the government’s inability to resolve the issue has caused doubts among voters as to the new team’s international credentials.

A potentially more dangerous matter for Mr Abbott is the row over education funding. Most states, but not WA, signed up to a new funding arrangement for schools based on the report of a committee headed by Sydney company director David Gonski under the previous Labor government.

Although no new government likes to have its hands tied on spending issues by its predecessor, the Liberals indicated during the election campaign that they would honour the undertakings on school spending if they won.

That is until late November, when Education Minister Christopher Pyne outraged many by announcing the spending agreements were being torn up.

Not surprisingly, the South Australian Labor government, which goes to the polls next March, was incensed. But so was the NSW Liberal premier, Barry O’Farrell, no doubt because he got a very good deal from a federal Labor government eager to get the biggest state government on side.

WA’s premier, Colin Barnett, was less surprised. Possibly confident of getting a better deal under the new coalition government in Canberra, he noted the issue was all about politics.

If it is (all about politics) then Mr Abbott and Mr Pyne would be marked at about two out of 10 for creating uncertainty in the education sector, giving the teachers’ unions a field day, and causing needless anxiety among parents.

If they were concerned about the Gonski spending initiatives, and different deals for different states, all they needed to do was commission a report into the previous government’s funding decisions straight after the election. If the different deals were confirmed they could have used that to modify the commitments.

But there seems little cohesion in this government’s approach, with the combination of uncertainty over the sensitive area of education, and questions over the handling of international issues, casting doubt on its competence.

Both issues were left to drag on for too long. The government will have to reassess its strategies. It has to get a lot smarter.