Neither side of politics has yet managed to engage the electorate with a clear and comprehensive transport strategy. 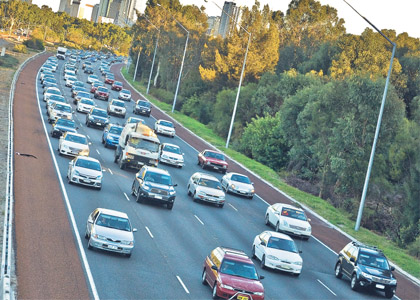 STALLED: Transport will feature prominently in the major parties’ upcoming policy platforms ahead of the March election. Photo: Grant Currall

Neither side of politics has yet managed to engage the electorate with a clear and comprehensive transport strategy.

THE education minister and officials from the Department of Education are usually the only ones in the bureaucracy sitting on the edge of their seats at the start of each school year, hoping nothing major goes wrong as thousands of teachers and more than 200,000 students return to classrooms.

The sense of anxiety will be more keenly felt across government next week as schools reopen for 2013, however. After a relatively quiet seven weeks on metropolitan roads and public transport, the ‘c’ word is likely to resurface - congestion.

And in an election year, that is a problem for more than just the bureaucrats at ‘silver city’.

The issue is exacerbated by the changing travel habits of students. Whereas previously most arrived at school by bus, now a significant proportion is driven by a parent, which adds to the problem of traffic congestion. Stirling Highway in Claremont at 8.30 am and 3.30pm on schooldays is a perfect, but not the only, example.

What happens is that the major traffic arteries get clogged with the education cohort, including the Kwinana and Mitchell freeways.

It is particularly sensitive because of the imminent state election, and the fact that ‘transport and congestion’ was identified in the January Westpoll as the biggest election issue by 21 per cent of voters - up from just 6 per cent last July.

It also explains why both major parties have been busy in recent weeks bagging the other’s public transport policies aimed at easing congestion.

Transport Minister Troy Buswell has claimed that Labor’s Metronet public transport plan would cost $6.4 billion, which Labor says is wildly inflated. The Liberals say their promise of a light rail link from the city to Mirrabooka will cost between $1.5 billion and $2 billion, but that’s not set in stone.

All this is of little comfort to thousands of motorists, including truck drivers and other commercial operators, for whom time spent in traffic snarls is unproductive and adds to costs.

I well remember the day a beaming premier, Richard Court, arrived for a news conference in Belmont following the opening of the Graham Farmer tunnel, which was built despite significant local and political opposition. Mr Court came by truck from Osborne Park, and noted the travelling time operators saved by using the tunnel, hence lifting productivity.

The tunnel will soon have a third lane each way to cope with the increased traffic partly due, it must be noted, to the disruption of Riverside Drive caused by Premier Colin Barnett’s Elizabeth Quay waterfront project.

So the challenge for both sides of politics is to come up with a plan that will do more than get them through the March election. It will need to target Perth’s needs for the next 50 years, just as the Stephenson-Hepburn plan did in 1955.

Of the two strategies to emerge so far, Labor’s is by far the more comprehensive. Mr Buswell has sought to denigrate it by saying it takes care of every marginal seat, meaning it is an essentially political document. There may be instances of that; for instance can the planned Ellenbrook line be economically justified?

But the Liberals need to prove their credentials with a more comprehensive blueprint that has been presented so far. Why should living south of the river condemn residents to morning and afternoon traffic snarls on the Kwinana Freeway? Similarly in the north.

One thing for sure, motorists will be delighted when a political party comes up with a plan that does ease the daily ‘education transport bulge’. That party might even get their vote.

IT was the colourful Victorian footballer and commentator, Lou Richards, who coined the phrase ‘kiss of death’. It meant that if you publicly praised a player, that support was likely to backfire and prove to be counterproductive, regardless of their credentials.

That lesson doesn’t seem to worry the prime minister, Julia Gillard, in her decision to publicly back the Olympic hockey gold medallist, Nova Peris, for top position on Labor’s Senate ticket in the Northern Territory.

Nor did it bother former Labor premier Alan Carpenter when he was assembling his party’s candidates for the 2008 election. Mr Carpenter was tired of party factional hacks getting endorsed in safe seats, and wanted to infuse some fresh blood.

He put together what became dubbed ‘the dream team’, and paraded his candidates as the new look of the Labor Party.

The best-known face in the squad was Channel 7 television journalist Reece Whitby. I had known Reece professionally for years, but he had kept his political views to himself, as political reporters should.

There were problems with his candidacy, however. He lived well away from his proposed seat of Morley - nominally ‘safe Labor’ - and Labor branches in the electorate believed the party had given the sitting member John D’Orazio a raw deal, despite his involvement in several controversies. Mr D’Orazio stood as an independent, Mr Whitby did not get his preferences and Liberal Ian Britza was the surprise winner.

Undeterred, Mr Whitby is lining up again after having done a lot more groundwork than last time. Morley will be a seat to watch on election night.

Arthur Marshall (Liberal), who played at Wimbledon in the 1950s and football for East Fremantle, represented Dawesville in the Legislative Assembly, and his football colleague, the late Trevor Sprigg (Murdoch), was an effective Liberal MP.

Probably more prominent footballers have tried and failed, including Sandover medallists. But I always thought one of the great mysteries was why the Australian Democrats would not endorse Olympic legend Shirley (Strickland) de la Hunty -who nominated several times - for a winnable seat.

In the federal arena, the obvious example is Ric Charlesworth, rated by many as Australia’s best hockey player. He was federal Labor MP for Perth (1983-93) but eventually quit, believing his promotion to the ministry was blocked because he would not toady to the party’s factional bosses.

The most spectacular celebrity candidate was rugby league legend Mal Meninga, who was seeking election to the ACT Legislative Assembly as an independent in 2001.

Asked in a radio interview about his candidacy, he said: “And the thing about that is, I guess, I was a public figure and I was put on the podium where I was just a person out there ... I’m buggered, I’m sorry, I have to resign.”

Even with Lou Richards’ comments in mind and all the resulting pressure, not even Ms Peris’s strongest opponents would want something similar to happen to her.