Tracking the stars on our horizon

It is fascinating what you can find in our rich world of data if you have the time and inclination. Clearly there’s more of both than usual for some people these days. 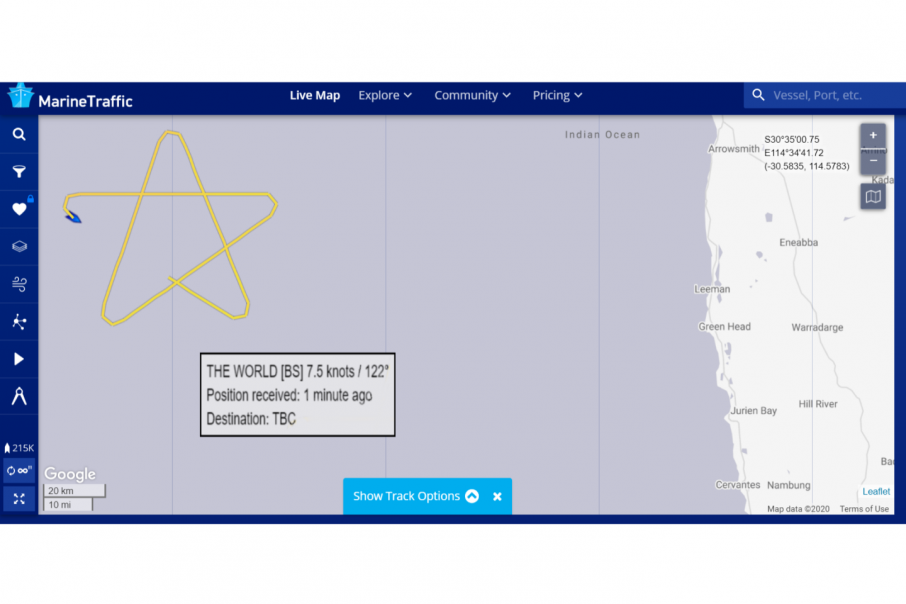 The World is following an unusual pattern off the Western Australian coast.

It is fascinating what you can find in our rich world of data if you have the time and inclination. Clearly there’s more of both than usual for some people these days.

Take for instance, the unusual movement of a cruise liner stationed off the Western Australian coastline, about 150 kilometres west of Leeman as small fishing outpost north of Perth. Business News was alerted to it by a keen reader.

Last week I mentioned how uber-luxury floating apartment complex The World had disgorged all its passengers at Fremantle in mid-March and opted to remain stationed offshore to wait out the pandemic.

No doubt, the news of the predicament that other cruise liners have found themselves in has reinforced to The World’s crew and management just how right they were.

It seems without a clear end in sight for this pandemic and, therefore, no obvious next port of call, the ship, which consists of rooms owned by around 150 of the globe’s richest people, appears from tracking on marinetraffic.com to have plugged a star-shaped holding pattern into the autopilot to provide some break from the monotony.

We can only hope this is just the start of a plan to trace the Southern Cross and, maybe, the entire Australian flag as The World takes refuge in one place that seems to have managed the crisis quite well – to date. [Addendum: April 10 update, The World was no longer in a holding pattern and was tracking towards Colombo, Sri Lanka]

Efforts by Business News using the MarineTraffic website to locate other cruise ships remaining in waters off Fremantle seemed fruitless. Tracking systems show the Magnifica, which was warned away by Premier Mark McGowan two weeks ago, has taken heed and is about to enter the Suez Canal.

The Vasco da Gama, having disembarked several hundred passengers at Freo, was today en route to the South African port of Cape Town at 13.5 knots, already just beyond Rottnest Island where many of its former passengers are enjoying quarantine.

Another cruise ship that troubled the local authorities, Amsterdam, is now also in South African waters, just off Durban. The Pacific Princess is just passing New Caledonia on its way to Honolulu, part of the US island state of Hawaii.

Radiance of the Seas has sailed past Fremantle and is heading north off the coast near Geraldton on its way to Singapore after leaving Wollongong's Port Kembla in NSW on March 31.  It was the first of several cruise ships that have headed across the Great Australian Bight after leaving eastern states' waters after being told they were no longer welcome, a similarly frosty reception awaits them in WA, according to the state government which has issued 'move along' notices in advance of their arrival off the sourthern coast.

Meanwhile, the Artania remains moored in Fremantle as the cruise sector nurses its wounds and, no doubt, ponders whether or not WA will feature as a destination if and when the bitter memories of 2020 are erased from future passengers’ minds.