St Andrew’s Church on St Georges Terrace will remain closed for the foreseeable future due to structural issues, unless the Uniting Church can secure an anchor tenant for a planned 22-storey office tower. 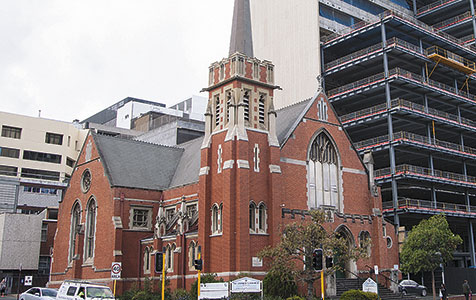 St Andrew’s Church on St Georges Terrace will remain closed for the foreseeable future due to structural issues, unless the Uniting Church can secure an anchor tenant for a planned 22-storey office tower.

The church has been closed for some weeks, after issues pertaining to the building’s supporting structure and roof were discovered.

Uniting Church associate general secretary Robert Locke told Business News the church remained in the market for an anchor tenant for its $22 million office tower proposal, and repairs would not be done until a deal was secured.

Mr Locke said the Uniting Church’s development application at the site, which was approved in August last year, would be valid for around another 18 months.

The proposal is to demolish two existing buildings at the site to facilitate construction of the 22-level tower and refurbish the heritage-listed church building.

Mr Locke acknowledged that the repair of the church could be a considerable constraint in securing a suitable tenant or even a builder for the job.

“Whatever proposal we undertake, an important part of it is that the church needs to be brought up to scratch,” Mr Locke said.

“That’s always a sticking point with what we’re looking at, because whoever builds the office tower may not necessarily want that as part of the operating costs.”

A leasing campaign run by Willoughby Property Group is ongoing, but it is not quite clear where a major tenant will emerge from for office space in the proposed tower.

The Perth CBD office leasing market has been relatively quiet so far in 2014, with the Property Council of Australia reporting in January that the vacancy rate had hit 9 per cent, up from 6.4 per cent in July last year.

While major leasing deals have been few and far between, Leighton Properties and DEXUS Property Group announced last week that energy giant Shell would take up the entire office space on offer at the Kings Square 2 tower, taking its total commitment to 19,300 square metres.

And earlier this month, Business News exclusively reported that Perth’s largest accounting firm, EY, was understood to be close to finalising a deal under which it would remain at its current Mounts Bay Road home until at least 2023.

Meanwhile, the other church group currently active in the property development space, the Anglican Perth Diocesan Trustees, is close to wrapping up two major projects, and is also set to launch a third.

The Perth Diocesan Trustee’s $85 million redevelopment of Cloisters on Hay is scheduled to be complete in July, with engineering firm Aurecon signed up for 6,000sqm of the office space available in the tower, which is having eight additional levels added to it.

Construction works at Cloisters on Hay are being undertaken by Probuild.

The other major development by Perth Diocesan Trustees is the office tower at 565 Hay Street, which is being redeveloped by Northerly Group.

Northerly is currently putting the finishing touches on the $25 million redevelopment, which also included the demolition of the old Law Chambers building on Hay Street.

The building was stripped back to its original core and reclad, while another floor was added and the existing floorplates were extended.

The refurbishment was designed by architecture firm Cameron Chisholm Nicol.

The third project, the $14 million song school and office building located in the St George’s Cathedral heritage precinct, remains in the planning and approvals phase.

The nine-level proposal won planning approval from the City of Perth in November last year, after a previous approval granted in February 2011 lapsed.

The proposed tower will comprise a two-level song school and house the offices of the Perth Diocesan Trust, and will also include a café with an outdoor plaza located on the first level.

The building’s design was selected through a competition held by the Diocesan Trust.